The Future of Scotland Yard by Liza O'Connor

The Future of Scotland Yard 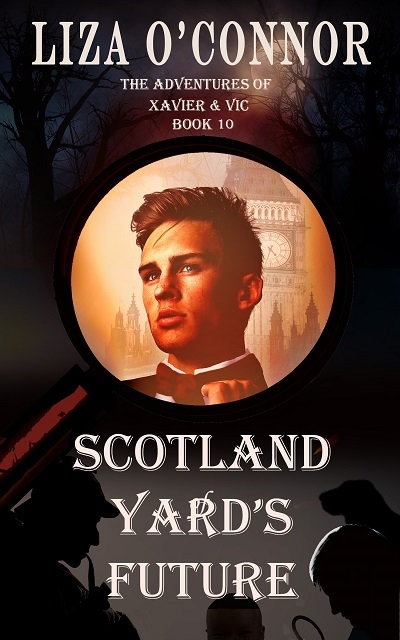 England has become besieged with foreign entities claiming to be English citizens. Three of them have managed to become members of Parliament. Worse yet, the new Prime Minister plans to remove Xavier from his position as head of Foreign Affairs and slot in a man the new Prime Minister likes a great deal. Unfortunately, the man is a Russian Spy.

Worse yet: Vic’s sister, Claire, has been declared healthy, despite being insane, and after marrying her doctor, who declared her sane, a week later she returns to London with the intent to kill everyone she hates, which is anyone associated with Vic. When Claire’s husband gets fired, he joins her in London and proves to be the reason she has a killing compulsion. He wasn’t making her better all this time. He was making her deadly.

To Vic’s horror, she discovers that Claire has murdered young men who resemble her. Since Tubs keeps Vic safe from harm, Claire is forced to kill young men who look like Vic rather than kill Vic. The murders have gone on for a year since Scotland Yard sought a man as the killer. Fortunately, the sixteenth victim didn’t die and knew exactly who had attempted to kill him: Claire Hamilton.

Claire is charged with fifteen deaths and one attempted murder. She is to be hung, the only problem is that Claire is so light, there’s a strong possibility that she won’t die and will quite possibly escape. Barns is determined not to let that happen, but Claire has some amazing skills.

Vic and Xavier, the finest sleuths in England, couldn’t sleep due to a noisy street mob outside their window. For some reason, their normally quiet street had been invaded with a riot of drunken sods who wished to sing off-key and dance the bloody night away. Worse yet, some of the neighbors gave up on sleeping and joined the party as well.

Even at 6:00 a.m., the mob remained outside his home being as noisy as ever. Having enough of this nonsense, Xavier stormed down to Gregory’s room and demanded he use his telephone to ask Barns, the new head of Scotland Yards, to throw the whole bloody lot of them in jail.

“Sir, it is very early in the morning. I doubt he has yet gone to work,” Gregory chided.

“Don’t argue with me, for I haven’t had a wink of sleep,” Xavier warned.
With a huff, Gregory dialed the head of Scotland Yard on the matter of badly singing drunks.

Before Gregory could reply, Xavier grabbed the telephone and yelled, “Barns, I want you to blast the drunken sods on my street with cold water. No one in this house has gotten a minute of sleep!”

“I am. I’m just astounded that you called me on such a ridiculous request so early in the morning.

“They have been at it all night. Shall I send them to your street and see how much you like their off-key singing? Several of the local dogs are howling in pain from the racket.”

“Xavier, I don’t have time to tend to the mob. I have far more serious problems.”
“What other problems can you possibly have at this god-awful early hour?” Xavier demanded.

“I don’t have time to discuss it, presently,” Barns snapped. “However, I’ll have Captain Meyers send a carriage of officers to disperse your party.”

“They aren’t my bloody partygoers!” Xavier snapped. Before he could rant more, Barns hung-up on him.

Xavier stared at the phone in shock. Barns had never hung up on him before.
By the time Xavier returned upstairs, he was highly annoyed. “Barns just hung up on me!” he yelled at Vic.

“Well, something must be up for him to be at work so early. And why are you yelling at me? I didn’t hang up on you.”

“I appreciate that,” Xavier stated. “Thank you for not yelling at me.”

Vic wrapped her arms around him and kissed him.

“Even better,” he stated. “Let us ignore the nonsense outside and enjoy a moment of pleasure.”

Five minutes into their love making, Captain Meyers and his officers arrived to remove the noisy and inconsiderate street people.

“Damn it all! Why do they show up now?” Xavier snapped.

Vic covered his face with kisses. “Stop. They are doing exactly what you asked them to do. You cannot demand them to arrive, then complain that they actually arrived.”
“You are correct. So, let us continue to make love while they disperse the mass of troublesome, inconsiderate Cretans outside our window.”

While they concluded a very fine bout of pleasure, Captain Meyers and his men removed the obnoxious partygoers, threatening them with jail time if they returned. Now with blessed silence outside, they decided to get a bit more sleep.

“Should we let Stone know that we’ll be late to work?” Vic asked.

“Stone will figure out why and where we are. While his body has weakened, his brain and hearing have not.”

Vic agreed. Stone, their third partner and former head of Scotland Yard, was awake and in the office across the street. Any issues that might pop up before they got a bit more sleep, Stone would handle if he could do so at his desk. If a problem required mobility, he would send Jacko’s eldest son, Pete, across the street to let us know.

While Davy was also in the office, he could no longer do much, other than fix a hot cup of tea. His bones hurt like the devil during winter, and this winter was brutal.

Vic had offered to move him back to her warmer home, but Davy refused. While he insisted the drafty room upstairs suited him, she suspected he just couldn’t get use to the noisy children in her home. Thus, she purchased him the finest blankets she could find, to keep him from freezing to death.

To be honest, the children were a noisy lot, but she didn’t mind since it was mostly in play. Vic loved to hear all the children playing and laughing. Besides her fabulous son, Cannon, there was Tub’s boy, Ham, who was by far the tallest of the children now, despite that Cannon was ten months older than Ham. Their latest rescue was an adorable baby boy named Danny. She acquired him from a Baby Farmer who had been ordered to kill the child. For a mere hundred pounds, he gave her the child.

Best of all: the children got along with one another.

Unfortunately, when Claire finally discovered her mansion didn’t legally belong to her, she went crazy. Upon discovering that Victor “owned” her mansion, she set it on fire. Never mind she and her many male friends were the only ones who entered it now that she had divorced David.

Refusing to risk the lives of everyone in Vic and Xavier’s house, Xavier had Claire committed to the finest asylum in England.

Vic hoped the place could cure her.

Xavier doubted anyone could cure Claire, but he never shared that with Vic.
However, it did mean that Maddy moved to their house so she could live with her father, David, and little Danny. Nor, did it take long for David to realize Maddy hated baby Danny.

Vic wasn’t surprised that Maddy had anger issues. But she had no idea why Maddy would focus her anger on the sweet baby. 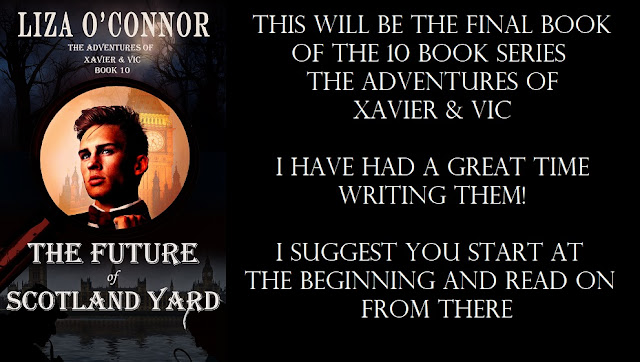 All ten of these books are available
at D2D (Draft2Digital)
at these fine stores.

However, this link will get you to the Final Book
https://books2read.com/u/mdzGVl
at these sites
245
Apple
Barns & Noble
Bibliotheca
OverDrive
Scribd
Tolino
Angus & Robertson
Kobo
Nook