BEFORE MY WORLD TURNED BLUE is a paranormal time travel romance about two star-crossed lovers whose affair could change the future of planet Earth. Atmospheric, sensual and full of mystery, it’s the second book in a series about a small town turned gateway to an apocalyptic ghost war and the men and women on the front lines fighting to save humanity from extinction. 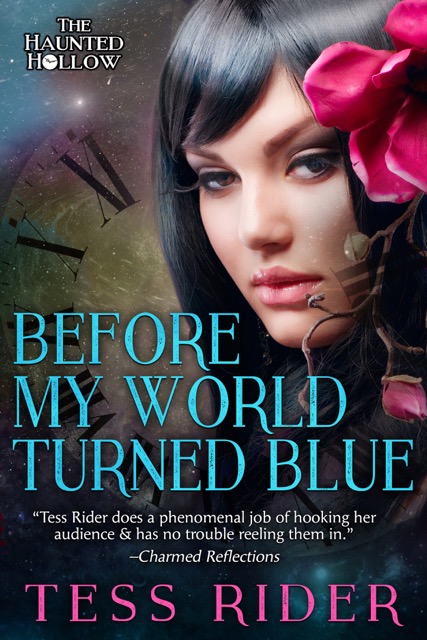 What if the impossible is just a kiss away from reality?
Long before she became the witch of the Haunted Hollow, Ruby Radley was just a girl in love with the wrong boy. Step into the past and find out if Ruby is doomed to become the terrifying Scheherazade or if, with a little help from unexpected places, she can change her destiny.

It’s 1942 and Ruby, a beautiful heiress to a massive family fortune and the step-granddaughter of a powerful necromancer, has no say in man she marries. She’s tried sabotage, prayer, even charms and hexes and nothing has succeeded in preventing her impending marriage to a man she hates. Secretly in love with town outcast, Justin Wyatt, Ruby finally turns to morally ambiguous shadow magic in a desperate attempt to rewrite her fate. But all magic has a price.

Justin Wyatt knows he has no chance with a girl like Ruby and is headed off to war with nothing to come home to. Until Ruby turns a farewell with friends into the most incredible night of his life. And the strangest. When a time traveling detective from the future and two meddling ghosts get involved, who knows how events will unfold this time. What price is Ruby willing to pay and how far is Justin willing to go for true love?

This is a well written, complex, and riveting story. Beware: there are lots of story strands that will secure you in a web of pain, deceit, and regret. But there is also love and while it did not conquer all just yet, it did manage to take a bite out of evil and create the possibility that in the future Love can win.
The story begins near the end of human life and true love. There is no saving our world unless the time travelers can locate when all went irrevocably bad and fix it. So our angry, resentful time traveler, Sam, heads back in time.
WARNING: Because I could not put this book down, I am now at risk of starving.
But first I wish to tell you: Buy and Read this book, but begin reading in the morning because there are way too many creatures of the dark and ghosts in this book to dare take them to bed with you. 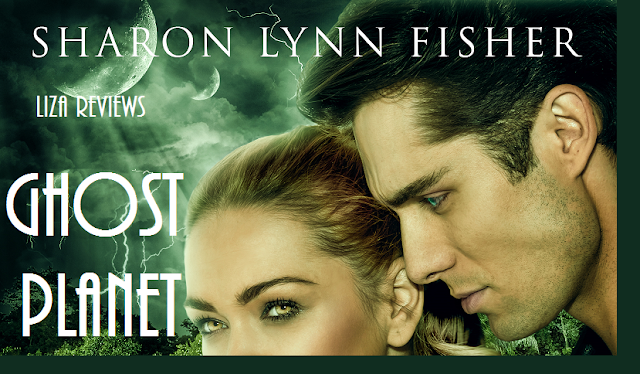 Today, I have a fabulous treat for you. A superb story by a fabulous author. I review it, and you're going to love it! But first, Let's have Sharon tell you a bit how she came to write this story...

Why I wrote Ghost Planet
I used to write fantasy, and as a young adult, I wrote two novels and several short stories. I submitted to a few publishers and magazines and got some encouraging feedback, but eventually I gave it up because … well … life.

After the birth of my daughter, when I turned 40, I decided I could no longer put off doing the thing I had known I wanted to do since I was 6. I wrote a handful of fantasy stories for the Writers of the Future Contest, and I kept getting honorable mentions but couldn’t get any further. I thought I might have a better chance with a sci-fi story, but I didn’t know how to get started.

After a few days of thinking about it, the title came to me, and I started wondering what would a story called GHOST PLANET be about? It all got going from there. First I wrote a short story, which was basically the novel’s first chapter. I received yet another honorable mention, and a rejection from a well-known sci-fi magazine whose editor “did not find the story compelling.” But that story wouldn’t die, so I continued writing until it was a novel, submitted it for a romance contest instead, and was nominated for an RWA Golden Heart Award, and later a RITA. 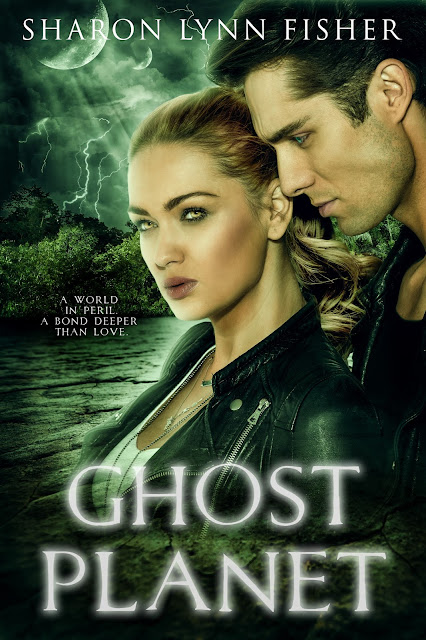 A world in peril. A bond deeper than love.
Psychologist Elizabeth Cole prepared for the worst when she accepted a job on a newly discovered world--a world where every colonist is tethered to an alien who manifests in the form of a dead loved one. But she never expected she'd struggle with the requirement to shun these "ghosts." She never expected to be so attracted to the charming Irishman assigned as her supervisor. And she certainly never expected to discover she died in a transport crash en route to the planet.


Reincarnated as a ghost, Elizabeth is symbiotically linked to her supervisor, Murphy--creator of the Ghost Protocol, which forbids him to acknowledge or interact with her. Confused and alone--oppressed by her ghost status and tormented by forbidden love--Elizabeth works to unlock the secrets of her own existence.

But her quest for answers lands her in a tug-of-war between powerful interests, and she soon finds herself a pawn in the struggle for control of the planet...a struggle that could separate her forever from the man that she loves.

A uniquely original sci fi. I loved every minute of it!
For the humans who land on the planet Ardagh they must deal with a ghost attaching to them. The psychological damage of having a ghost caused them to establish the Ghost Protocol. The protocol required the human to ignore the ghost attached to them. Never to speak to them. Ignore their needs.

Thus, most ghosts were half starved, sad creatures.
But then the creator of the Ghost Protocol, Grayson Murphy, meets a young woman, Elizabeth, just arrived on the planet, never realizing she was not human, but a ghost, and an affection, a bond is created before either discovers the truth.

Can love exist when one partner has all the power? Elizabeth refuses to accept the rules for the ghost. She will not be ignored! So she turns her efforts to discover what is really going on in the planet and what did she have to do to break away from Dr. Murphy. Until then, she has to tag along with him wherever he goes.

Unlike any ghost before her, Elizabeth is determined to understand this planet and the symbiotic relationships between all living things on it.

What if nothing works properly if powers are unbalanced?

On Ghost Planet the ghosts and the living personify the problem. Will they find the solution?

Fabulous twists to the very end.

Now, for the longest excerpt ever created:
I gave you the Review first so you actually have incentive to read through the entire excerpt below.