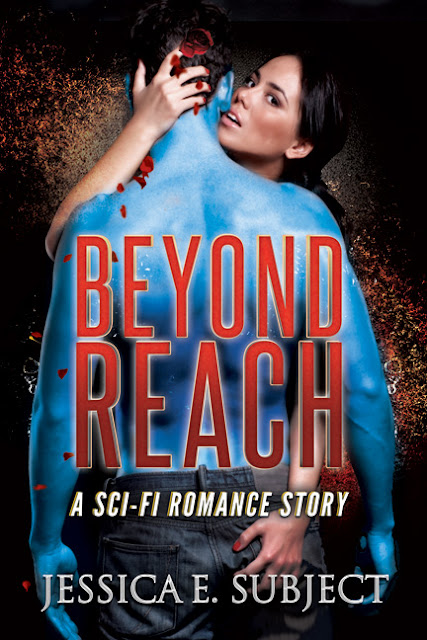 BLURB:
Abandoned by her parents…
Born on Earth, Nixie was left on the planet Schedar when her parents returned home. Growing up on the pleasure planet, she follows in the footsteps of the woman who raised her, and learns the art of erotic massage. But Nixie yearns for a different life, one where she receives as much pleasure as she gives.
A runaway prince…
In an attempt to escape his arranged marriage, Prince Mekai flees to Schedar. For, he could never love his betrothed when he already loves another, a fantasy woman who invades his dreams every night. When the woman he seeks carnal pleasure from turns out to be the same one in his fantasies, he believes fate brought them together.
Fated lovers or forever enemies?
Just when Nixie and Mekai believe they have a chance at happiness with each other, they find out why their races are at war, and why they can never be together.
Please note: Beyond Reach was previously published with another publisher. It has been revised into a darker story than the original, and expanded to give the hero and heroine a harder, but much more satisfying happily ever after. 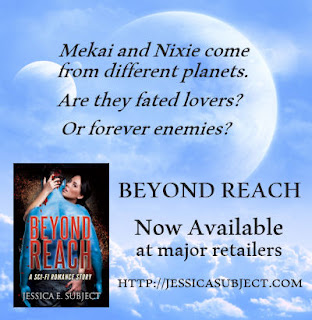 EBOOK BUY LINKS:
Amazon US | UK | Canada | Germany | Australia
All Romance | Nook | Google Play | iBooks | Kobo
Add to Goodreads
EXCERPT:
Walking into the silky rear-end of an uidiss, she came to an abrupt halt. The creature had been walking at a steady pace and then stopped. She’d failed to notice in time. Wiping fluff off her face, she turned around and walked into another hard body. “I’m so sorry.”
Hands clamped down on her arms. “Are you all right?”
She stared up into deep brown eyes. Chewing her bottom lip, she nodded. If this man hadn’t been holding on to her, she would have fallen to the ground. The word swoon held no meaning for her until now.
Am I only like this because of the ipsum I inhaled back home? Or was there something more she found heart-racing about the blue-skinned, well-muscled hunk of an Ubetron who held her up?
No, she couldn’t feel anything for him. Their races had been sworn enemies for years. Everyone across the galaxy knew that. Yet here she was, standing face to face, gazing intently at him, with no will to move.
He smiled at her, drawing her attention from his eyes to his lips. How would they taste? She’d never kissed anyone intimately before.
“You look familiar. What’s your name?”
Name? Gods, what was her name? “Ni…Nixie.” Had she told him, or only thought the word?
He released her arms to brush his fingers along her jaw line. How she remained standing, she had no idea.
“Nixie. A beautiful name belonging to a beautiful woman. Have we met before?”
Moisture pooled between her thighs. Her cheeks warmed. “Thank you, but no.” She’d definitely remember meeting him.
As he trailed a hand down her arm, she sighed. Her entire body tingled from his gentle touch.
“Okay, weird. You must remind me of someone else. Now tell me, why were you in such a rush that you walked into the rear end of that slow-moving beast? We’re supposed to be on vacation, enjoying all this planet has to offer.”
Laughing at his description of the uidiss, she leaned against his arm. Never before had she enjoyed a man’s attention like this. “I’m not visiting. I live here. Have my whole life.”
He raised his eyebrows. “Really? So, what was it like growing up on the pleasure planet?”

The Planets of Beyond Reach

These are the main planets mentioned in Beyond Reach, most of them visited at some point during the story.
Carbae
- where the story begins
- not an actual planet, but the moon of Ubetron
- the inhabitants, originally from Ubetron, live in homes built into the ground
- cold climate
- where the hero is from
Ubetron
- a planet in the Petrogeous galaxy
- natives are humanoid with blue skin, their hair ranging from gold to dark brown
Schedar
- known as the pleasure planet
- home of ipsum, a naturally-grown drug that helps people to relax and reduces their inhibitions
- also home of the Suavitas, those who practice the art of sensual massage
- natives have golden brown skin
- population numbers vary, as over half the people on the planet at any time are tourists
- where the heroine is from
Tenebrae
- a planet containing only a prison colony
- often used as a threat to misbehaving children
Earth
- the planet we live on, but in the future when governments are trying to make trade deals with other planets rather than other countries.

Review of Beyond Reach by Jessica Subject

I love the creative stories of “fight for love” that Jessica creates. And then just when you think everything is settled, she throws a surprise wrench in the works.

In Beyond Reach Prince Mekai doesn’t want to marry the woman his parents have chosen for him. So he contrives a situation which results in his friend (who is more than willing to marry her) to marry her instead.
This allows Mekai to travel to a pleasure planet to recover. And there he meets the woman of his dreams, Nixie, and lots of hot spicy sex pursues.

Some would have ended it here, but there is much more to happen. Betrayals, surprises, pain and sorrow and finally a happy ending.  Yep, just a typical Jessica Subject book.  I give it a fabulous five stars. 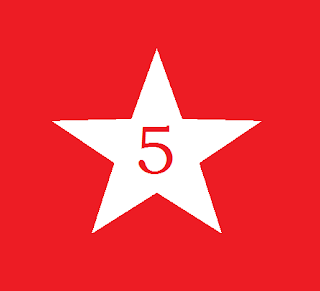 ABOUT THE AUTHOR:
Jessica E. Subject is the author of science fiction romance, mostly alien romances, ranging from sweet to super hot. Sometimes she dabbles in paranormal and contemporary as well, bringing to life a wide variety of characters. In her stories, you could not only meet a sexy alien or two, but also clones and androids. You may be transported to a dystopian world where rebels are fighting to live and love, or to another planet for a romantic rendezvous.
When Jessica isn't reading, writing, or doing dreaded housework, she likes to get out and walk with her giant, hairy dog her family adopted from the local animal shelter.
Jessica lives in Ontario, Canada with her husband and two energetic children. And she loves to hear from her readers.
AUTHOR LINKS:
Website/Blog | Email | Newsletter | Twitter | Facebook Page | Facebook Reader Group
Pinterest | Instagram | Google+ | Amazon Author Page | Goodreads | Authorgraph
BEYOND REACH TOUR CONTEST
In celebration of Jessica’s new release, she is hosting a contest.
What it up for grabs?
ONE winner will receive the following:
$10 e-gift to Amazon.com or Amazon.ca or AllRomanceeBooks.com
Signed print book of COSMIC DESIRES by Jessica E. Subject
E-book of Sinful Surrender by Houston Havens
E-book of Switched by Diane Burton
E-book by Kali Willows
E-book of Every Single Part of Me by London Saint James
E-book of The Hotter the Love by Lea Bronsen
E-book of Fighting For Honor by Kacey Hammell
Contest is international, except where prohibited by law. Must be 18 or older to enter. No substitutions will be made. Contest will close at the end of the day October 21, and winners will be notified by email. Good luck!
a Rafflecopter giveaway
Posted by Liza O'Connor at 12:00 AM