Liza invites Aurora Springer & the cat over, plus Liza reviews the novella. 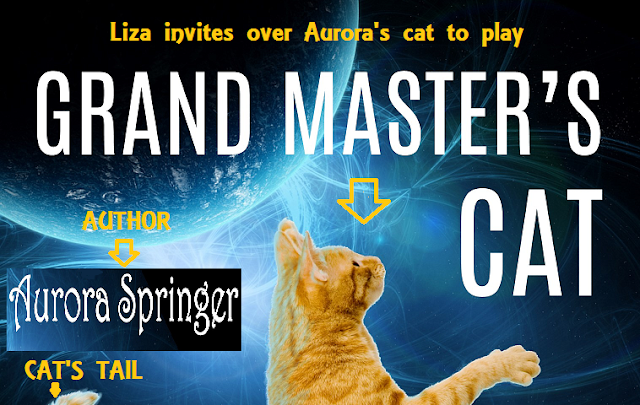 The cat required a slave to carry her, so Aurora came along too. It's not wise to piss off the Grand Master's Cat.  Below is the banner that Aurora wanted. It's very proper and professional. The cat wanted the above. Sorry Aurora, but the cat threaten to swat me.

Over the past few weeks, I have added a prequel to the Grand Master’s Trilogy, renamed the series and recovered two of the books. The new title of Grand Masters’ Galaxy will allow me to extend the series from a trilogy in future.

The short prequel, Grand Master’s Cat, introduces the Grand Master, Athanor Griffin, and tells how he acquired his friendly orange cat and caretakers of his castle. The short story ends immediately before the events of Grand Master’s Pawn. In the first full-length novel, empath Violet Hunter becomes a Pawn and after several adventures, meets her Grand Master. Their story continues over the second and third books in the original trilogy. 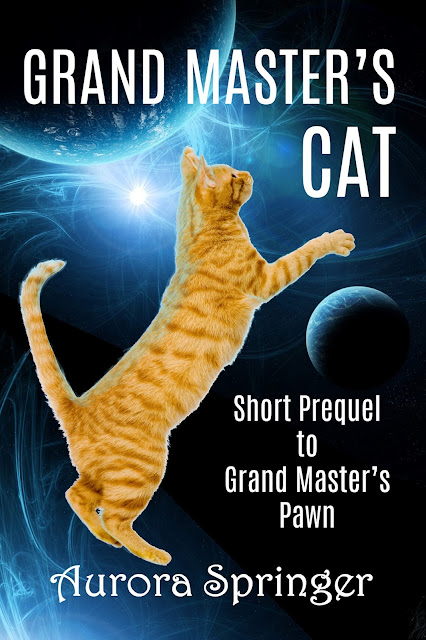 Blurb
When Grand Master Griffin investigates a wrecked spacecraft, his efforts to rescue the survivors lead to feline disruptions of his plans.

Excerpt
A hissing growl alerted the Grand Master to a new threat. He dodged aside and twisted to face his adversary, a sand-colored scorpion twice the length of his arm. The stinger missed his head, deflected by a small orange cat with its teeth fastened onto the segmented tail. The vicious creature whipped its tail from side to side, the fluffy orange animal dangling from the end. Losing its grip, the kitten dropped into the stony ground. The venomous tip stabbed at the fallen cat. The Grand Master thrust out his fist, blasting blue fire. Tottering under the psi blast, the scorpion staggered two steps and collapsed onto the desert sand.
The Grand Master chopped through its neck with a laser-sharp ray, and left his attacker. He ran to the cat, amazed that such a small animal had the courage to attack the giant scorpion. He lifted the limp kitten and ruffled its fur, searching for wounds with his psi probe. When he moved its left foreleg, the kitten whimpered. Sensing the mineral of the bones, the Griffin located a break. He sat beside the kitten and crooned to it. This simple fracture was within his ability to repair by sealing the gap in the bone.
While his psi energy bathed the tiny limb, the friendly cat rubbed its head against his hand and purred. Astonished by the cat’s lack of fear at his psychic emanations, he whispered, “Brave kitty!” The cat mewed and licked the Griffin’s fingers, apparently enjoying the tickle of psi power.
It must be the spacer’s cat. Or had he said cats?
Brushing his fingers over the soft fur, the Griffin gazed around the scene of the crash. He counted two wrecked ships, one caged black insectoid, one crushed scorpion, one dead human and this scrawny kitten. What else was in the ships? He had to check for any survivors.

What a fabulous prequel to The Grand Master’s Pawn!

I loved every moment of the story. But then The Grand Master’s series is one of my favorite Sci Fi Series.

The author’s ability to create new worlds is astounding.
And what is cooler than having a sentient tabby cat! I’d give this ten stars if I could.