Review of Pirate Nemesis by Carysa Locke
Mercy has impressive telepathic gifts, which are apt to get her killed by of all people, her grandmother. So her mother, also a telepathic, takes her child and escaped the planet before the reigning queen, and very bad grandmother can kill our heroine. Sadly, when Mercy is a young teen, her mother vanishes.
While searching for her mother with her only friend, Atrea, they are captured by a strong, sadistic, telepathic. Mercy is forced to do whatever Willem wants. In return he keeps Atrea alive until the day he decides Mercy is no longer worth the trouble.
Before he can kill Mercy, highly skilled telepathic pirates arrived and secure both women, only Willem has placed a poison in Atrea’s mind which will kill her in short order. Reaper, one of the pirates, places her into stasis so the poison cannot progress until they can determine a cure.
Mercy has been tortured, abused, and treated like a lab rat for so long, that she trusts no one. However, when the pirates take her to their ship of other telepathics and fix her injuries, her distrusting nature lessens, and the one she grows to distrust the least, is the man named Reaper, who rescued her. And overtime, an unlikely love grows between them.
However, this is NOT an easy love. Neither of them are very good at ‘trusting’. They both constantly pull up possible dark reasons why the other appears to care. But they keep working at it.
I really enjoyed this story. While there’s a bit of blowing stuff up, the novel kept me on the edge of my recliner with a mixture of telepathic intrigue, abuse, and righteous anger, mixed with tender moments of love and an adorable little cherub and her sidekick, an invisible large cat. I’m telling you without those softer moments, this story would have stressed me out. Ms. Locke did a fabulous job balancing the tender moments, the humorous moments, with the acts of horrors.
I also loved the attitude she gave Mercy.  Here’s one of my favorite lines when they try to pressure her into being a proper queen:

She couldn’t make everyone happy, so she wasn’t even going to try.
Also I appreciated she didn’t kill off a bunch of people just to make me cry. Because I hate crying.
However, there is an ominous epilogue….
So I’m expecting more hard times in a book 3
A well-earned 5 stars. 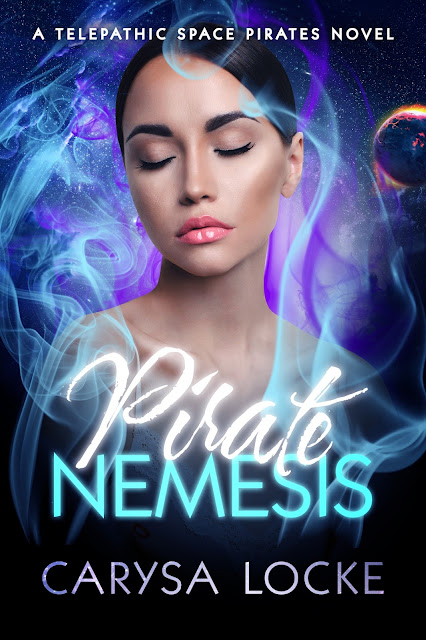 Mercy Kincaid is a fugitive from her own family. Her dangerous telepathic gifts make her a target. So is anyone she gets close to. When her best friend is captured and tortured, Mercy’s only hope is to reunite with the family that tried to murder her as a child. She trusts few among her blood relatives, but finds herself intrigued by an enigmatic and dangerous killer.

Reaper has spent a lifetime watching his people die. He's vowed to kill anyone who jeopardizes their survival. Mercy’s gifts are the biggest threat they’ve faced in eleven years, since a biological weapon nearly annihilated the pirate colonies. But Reaper realizes her talents can either destroy them, or save them. He must decide if he’s fallen victim to her power, or if he can truly trust the beautiful woman and her compelling abilities. If he makes the wrong choice, everyone dies.

“Cannon is your King now, right? He can stop this.” Mercy looked around, trying to spot him in the stands.
In the arena, Max and Kator were grappling again, each boy trying to gain purchase against the other. Max was slippery and wiry, but he wasn’t strong enough to gain and keep a hold on Kator. Their movements were odd, stilted and halting, not fluid like most fights. Each boy kept gasping like a fish, pulling in a great gulp of air at irregular intervals. She realized it had to be Talent. The boys were using telekinesis to try and kill each other.
Vashti gave a small, sad smile.
“No. He can’t. Cannon is not a queen. He can work around the deepest pieces of our culture ingrained by Lilith, but he cannot overrule them.”
“That makes no sense.” Mercy couldn’t see how that was possible.
Vashti met her eyes.
“We have had many years to test it, and have come to this conclusion: only a true queen can undo what another queen has wrought.”
Mercy stared back at her, her stomach twisting into painful knots. Realization crashed over her in a wave.
This is why you brought me here, she said to Reaper. You want me to stop it.
We have been killing each other for decades. Our population continues to dwindle each year, each day that goes by. We are violent by nature, and Lilith took that trait and made it worse.
Vashti reached over and took Mercy’s hands between her own. Her green eyes were hopeful, and pleading.
“Save my nephew,” she said. “Please, Your Majesty.”

Author Bio:
Carysa Locke is the pseudonym for writing team Carysa Locke and MaLea Holt, two best friends who have been creating imaginary worlds together for more than twenty years. Carysa is a high school English teacher, and MaLea helps support families with special needs children. You might say, they work as super heroes in their day jobs!