One disturbing point of my books is there are quite a few Pre-ordained deaths. Both Tamara and Blue are fully aware that their deaths were pre-ordained. On the positive side, neither actually 'dies'. They simply transform into a different entity rather like a powerful spirit.

I wouldn’t mind a pre-ordained death, especially if I got to help a great cause in doing so. Then, hopefully, I could get everything in order before my death. Maybe even clean the house, but that would be the last on my priorities. If I knew the exact time of my death, I could give all my stuff away and not worry about the future.  But alas, we don’t get an exact time of death. Even if you have cancer, exactly when you will go isn’t known until a short while before. Six months can be three months or nine.

I would love to know, down to the very second, so I could give away all my worldly goods in person. It would please me a great deal doing good deeds ‘til the end.

My spirit-Tamara was told by Pane, as she endured agonizing pains of death, that her demise was pre-ordained and necessary to protect her soul-bond and her husband when they go Outbound. And while she didn’t enjoy her excruciating death by poison, at least she didn’t have to blame herself for being stupid enough to stick her hand into a bag which was supposed to have apples in it only to be bitten by a deadly inland Taipan snake. That it rested in her bag of apples is most odd because it naturally lives in Australia, which was half-way around the world.

The Inland Taipan is normally non-aggressive to humans. It would prefer to get away from people. But stuck in a bag with a giant hand reaching in, it had no choice but to defend itself. And it did, killing Tamara in short order. As she died, Pane told her the good news about her transformation so she could keep Saran and Dmitri safe.

The other pre-ordained death is Blue’s, yet Pane has no idea who told him about his forthcoming death. Pane had no idea of the complexities required to save the Path of Light until a short time before the event when he dreamed a very complex solution to the problem at hand.

Do you think it possible that the dream Pane had in his sleep was like the advice he gives his sentients while they sleep? Did an even bigger God, possibly the First God, dream speak to him?

What do you think? 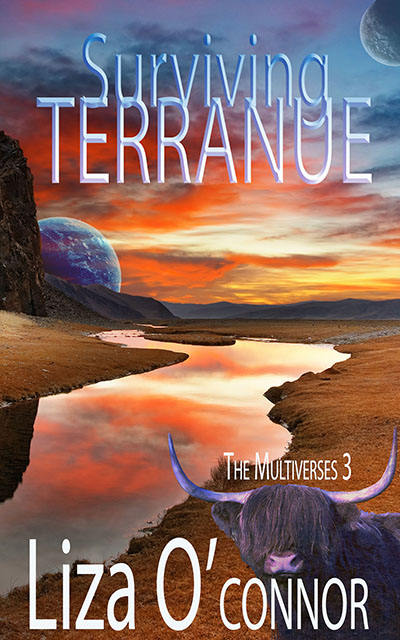 Blurb
Leading a colony of frightened people on a new world is rarely easy. The human colonists of Terranue have as their leader, Tamsarandem, the only Soul-bond of Three that has ever existed. Unfortunately, some perceive the innate kindness in the shaman’s choice of leaders as a weakness, thus, challenges begin. From the moment they arrive on the planet, self-survival instincts take hold among the colonists, putting the survival of the colony at risk.

Excerpt
Zousan worried over the twenty-six percent probability of The Path of Light succeeding in every single universe. It made no sense! The chances of the same percentage occurring was less likely than every sentient being in existence choosing the correct Zega Lottery’s seven hundred game symbols. No. This had his father’s hand written all over it. Damn Cronus! Why couldn’t he just be proud of his son’s success? Why was he driven to crush and devour his children? Was his ego so fragile?

While Zousan wasn’t crazy about most of his offspring, he certainly didn’t spend a second on conniving ways to destroy them. He just left them behind when his father allowed him his own multiverse. He happily escaped the man’s tyranny, taking his one sweet offspring, Athena, with him. While his other children were a pain in the ass, he absolutely adored his talented, brilliant daughter.

Without her, he would have failed early on, since she was the only one Cronus had ever shared the secret of creating life with. Fortunately, his father adored Athena and had showed her how to make life when she was but a little girl, long before Zousan demanded his own multiverse which he assured his father would be far superior to his.

“Pane have you found the source of trouble?” he asked his top shepherd.

About Author
Liza is a multiple-genre-author of nearly fifty novels.

All the Many Books Liza has written