Gravedigger
A Romantic Suspense
2019 Finalist in The Beverly

Hunting a killer is easy.
Learning to love is hard.

Josephine 'Jo' Rayburn has no luck with love. Between the demands of her job as a homicide detective, finding the perfect yarn for her knitting projects, and her nosy family, she doesn't have time to find her happily ever after, nor does she really believe it exists. Until she's assigned to the Gravedigger task force where she meets Rhysian 'Rhys' Harrison, the sexy Coroner's assistant.

Rhys Harrison thought he had found love with the perfect woman. But his parents' death forced him to choose between his fiancée and caring for his brother, he chose his brother. His only regret, the medical degree he abandoned to work in the Coroner's office. When the Gravedigger leaves his latest victim at the gates of a cemetery, Rhys and Jo are thrown together, her prickly personality interests him, but it's her deeply hidden romantic side that captivates him.

After one of the task force members is shot, Rhys's fears of losing Jo, like he's lost so much already, threaten to rip them apart. Can she convince him that love is worth having no matter the risk? Or will he play it safe, leaving before his heart becomes too attached? 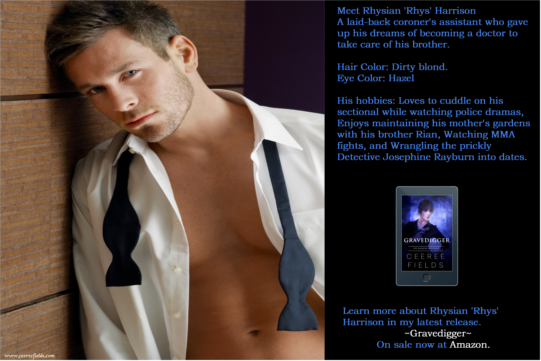 “Rayburn, Krane, my office,” the captain commanded, striding through the bullpen.
Dammit! Her morning had been great. Their LTs hadn't tossed many cases their way. Only two and the rest needed reports written.

“Sit.” He pointed to the chairs across from his desk. The cramped office held a bookcase with an attached credenza filled with various books, awards and a few trophies from their department's baseball team. On the desk was an ancient computer and pictures of the captain's wife and kids.

In some respects, the office was like any other in law enforcement. Papers, files, books, and odds and ends. In others, the space was unique in that the wine-colored leather chair, the captain sat in, was a gift from his wife. The solid credenza and desk were made from dark, expensive wood and given to him by his in-law's when he received the promotion to captain.

“Did you try to pass the Gravedigger case to Robbery?” The captain's patent scowl firmly in place.

“No,” Sullivan stated, his gaze jumping to Jo and she shifted guiltily. “Wait . . . you tried to pass our case off?”

“Maybe.” Of course she tried to pass the case off, however she'd been provoked. Dammit, Jo couldn't tell them this wasn't her fault without explaining.

The captain pinched the bridge of his nose, unsettling his glasses. “Why, Detective Rayburn?”

Shit. The captain was beyond pissed if he was using her title and last name, together. How to explain it'd just been a joke? Sullivan's gape-jawed expression would've made all of this worthwhile, except for the waves of anger rolling off Captain Walker.

If Brown and Jones would lay off the damned zombie emails, she'd not have done anything. But the damned emails were clogging her inbox no matter how many times she coded them as spam. Those crap emails buried leads and updates Jo needed. Never in this lifetime would she say that to the captain, Jo would never be a snitch.

“You know what? I don't want to know.” He jabbed a finger at her. “It's your case, period. Have you two made any progress?”

“No, sir. The clothes didn't pan out. They're older than the first body. None of the other files say anything about flowers, but they'll be on the lookout if they get any more bodies.” Jo rubbed her forehead. “Tech is looking at cleaning up Tennessee's video, but told us not to hold our breath—”

“What you're telling me is we have nothing until he digs another woman up,” the captain interrupted.
“Yes, sir.” Sullivan drew the captain's narrow-eyed gaze to himself.

“Fine, get out of here. Work on your other cases. Let me know if you get any leads.”

“Yes, sir.” Jo scrambled from the chair and darted for the office door. The meeting could've gone much worse, but maybe with the upcoming holidays the captain was giving her a break.

No sooner had she sat down than a file flopped onto her desk. She turned her frown into a yawn. Sullivan arched a brow at her, but otherwise his face was impassive. She'd been with him long enough to know he was asking if she had this. A slight tip of her chin and he sat back, allowing her to handle the two assholes.

“Heard the captain wasn't too happy with you trying to dump your case on us, Rayburn,” he stated from behind her.

Her chair released a loud squeal when she spun it to look at the smug bastard. “Nope.”

His beady eyes narrowed on her as she popped the 'p' at the end of the word. The suit he wore was clean cut and pressed within an inch of its life. She was tempted to lean forward and thump it to see if it'd shatter. But as the man that inhabited the suit didn't have much in the way of a sense of humor, she refrained. His partner however . . .

“Jo! Man, you can't be giving us shit you and Sullivan can't solve. It's bad form.” Jones wove between the other desks to join his partner.

Where Brown looked like a cross between a high school principal and a disapproving maître d', Jones was his polar opposite. Frumpy clothes that looked to have been slept in and a rounded belly from his fondness for hamburgers, and hot apple pies, Jones reminded people of their sweet uncles or best friend.

“Hey, you're part of Robbery”—she faked another yawn with a cough at the end to cover a chuckle that wanted to escape—“and technically these women were stolen—”

She arched a brow. Not intimidated in the least, she pressed into his face. “Then quit giving mine and Sullivan's emails out. Because if I get one more damned zombie survival email, I'm gonna do something a helluva lot worse than try to transfer our case to you two.”

Jo shouldn't retaliate, it would be wrong of her, and petty. Meh, like she cared. Inhaling deeply, Jo made damn sure Brown faced her before exhaling with a woosh toward him. That onion laden breakfast burrito she'd eaten this morning was made to be shared—with assholes.

“What the hell have you been eating?” Brown reeled away from her with a jerk, waving a hand in front of his nose. Then he rounded on Jones and stabbed a finger in his direction. “You! No sending them emails or signing them up for shit. I do not want that damned case!”

Jones's gaze dropped as he pretended to look contrite, but the broad grin contradicted any remorse he might have felt. “Fine.”

“Payback's a bitch and you two need to remember I have video of last year's Halloween party.”

Jones's head jerked up and his eyes rounded, the smile gone. “No, okay, no more. Swear to God, Jo.”

“Deal.” Jo held her hand out and shook Jones's, then Brown's hands in rapid succession.

“I'll spread the word,” Jones added after Brown jabbed him in the side.

“Thank you, gentlemen. Nice doing business with you.” Spinning back to her desk, she listened for their footsteps to retreat.

“What the hell kind of video do you have on them?” Sullivan asked, making Jo release a snort of laughter.
“Now, Sullivan . . . if I have something on them that'd be blackmail—”

“Yeah . . .” He motioned with his hand impatiently.
“Fine. They may or may have gotten drunk at our Halloween party then sang 'So Long, Farewell' along with the entire dance.”

“Holy shit. Like from the Sound of Music?”
Grinning, Jo nodded.

Throwing a paper clip at him, she said, “Quit saying that.”

“How? Jones, yeah, I can see if enough liquor's involved, but Brown—”

“Because I convinced them that Arabelle was there and requested it.”

Sullivan's eyes widened and then narrowed with a frown. “You used my daughter to get blackmail on our fellow officers?”

“Way to go, partner!” His frown slid into a grin as he held up his hand for a hi-five. 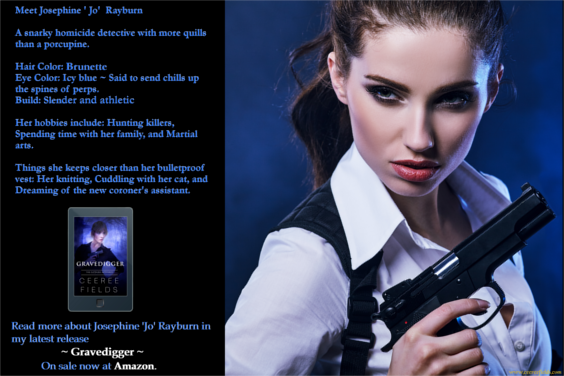 I'm a geek, a gamer, a music lover, and a voracious reader. I love Star Trek and B-grade movies like Attack of the Killer Tomatoes and Sharknado. I enjoy figuring out software and learning new things and applying them to whatever book I'm currently working on.

I write romantic adventures. Mostly, I live vicariously through my characters. I can be a knife-wielding forager who saves her family from deadly kidnappers or a slinky thief who must outmaneuver her sadistic cousin. My male characters aren't cookie cutter either. There's so much diversity in the world that one size does not fit all. It's the same for love. My male characters are diverse. I have several he-men, alpha types, but I also have nerds in glasses who can kickass when needed, whether in a board room or in a parking garage. I have characters who are blind and some who have lost a limb putting their lives on the line to save others.

The one thing they all have in common is they are people who learn to move past their hurdles and find love.