When I told buddies I was writing a story called The Cyborg’s Secret Baby, I received a variety of responses. The most common comment from non-romance readers was “I never thought you’d write a silly story like that.”

Secret Baby Romances are NOT silly stories. In my opinion, Secret Baby is the most serious, heartrending trope in Romanceland. It has an admittedly silly name but I suspect that’s designed to take some of the edge off the dark premise.

Secret Baby is very similar to the Second Chance At Love trope. A couple (or more) is parted for some reason. Two or three years later (on average), the couple is reunited. They’re given a second chance to make their relationship work.

The difference is when the Secret Baby couple parts, the female is pregnant. She might or might not know it but she’s carrying the male’s child. She doesn’t tell the male about the pregnancy. He doesn’t know his son/daughter exists until he sees his former love interest again.

Keeping knowledge of a child from a parent is one of the most terrible things anyone can do to another being. The heroine is depriving a father of his son/daughter and her son/daughter of his/her father.

There has to be a super serious reason for doing this. The couple didn’t part because of a trivial spat or a minor difference of opinion. There was a life-changing, perhaps life-ending reason for splitting up. The reason is never happy or light or ‘silly.’

For that (and other reasons), The Cyborg’s Secret Baby is perhaps the most emotional story I’ve ever written. It is my awesome editor’s favorite story of mine, the type of story that stays with a reader.

I’m proud of writing a Secret Baby Romance. It is my first story using that trope and I don’t know if I’ll ever write another one because they’re THAT challenging to write. The result was worth it, however.

What do you love about the Secret Baby trope? 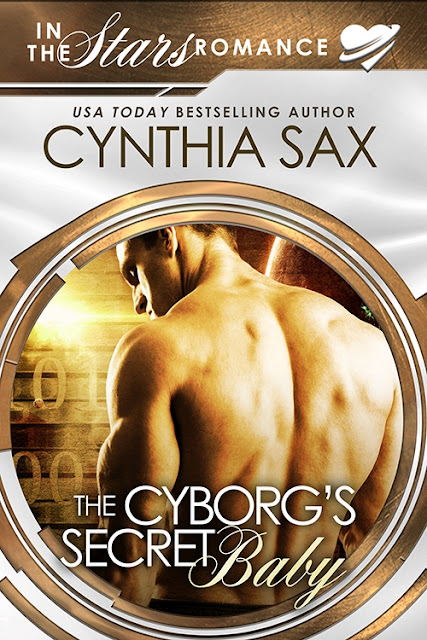 A fierce cyborg warrior and his curvy human female share a no-longer-so-little secret.

Stealth, a K Model cyborg, knows his passion for Zebrina, the commander’s human daughter, is forbidden, yet he can’t resist the curvy female. He craves her touch, cherishes her sounds of pleasure, would do anything to keep her safe.

When he’s faced with the choice of protecting his fragile human or living to see the next sunrise, he chooses her, always her, sending Zebrina halfway across the universe to safety. He doesn’t realize their stolen moments had consequences neither of them believed possible.

After hearing her warrior died in battle, Zebrina focuses on the last gift he gave her. Doing what is right for their child is her sole priority. She will put their son’s happiness first, even if that means choosing another male over the love of her life.

The Cyborg’s Secret Baby is a STAND-ALONE story loosely connected to the Cyborg Sizzle series.

It is also a Second Chance Cyborg SciFi Romance set in a dark, gritty, often-violent universe.

Sign up for her dirty-joke-filled release day newsletter and visit her on the web at www.CynthiaSax.com