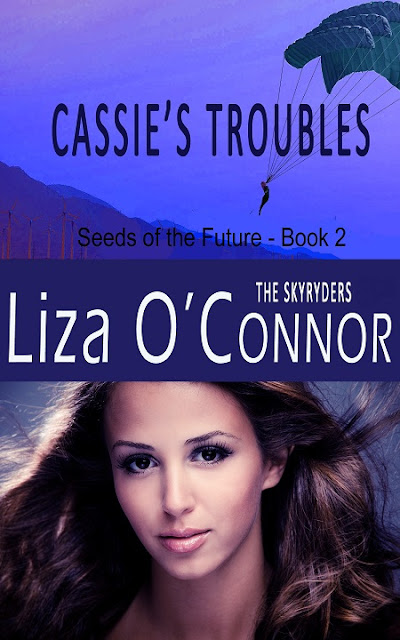 The SkyRyders are no longer the best-skilled fliers in the sky, and MAC is determined to rectify the situation by breeding better fliers. However, the introduction of an exceptional flier into the project brings an underlying cancer to light. Convinced the Corp removed a maneuver so a female could pass the flight exam, the male cadets in the Academy revolt. Sensing chaos and mutiny at the Fort, the enemy cartel gathers a force to annihilate the entire West Coast forces.

The general laughed softly. “Everyone feels that way at first. Come back in six months and if you still hate it, I’ll get you transferred into a regular Corp unit.”
“Six months?”
“A cadet as determined as you—you can survive anything for six months, can’t you?”
“Yes, sir.”
“You’re not still a virgin, correct?”
Cassie felt her cheeks warm. “No, sir.”
“Generally speaking, did you enjoy your sexual experiences?”
Cassie was certain she was now beet red. “Yes, sir, they were okay.”
“Well, I hope you will find them better than okay during your six months. After all you should get some reward for sticking it out. You were explained the rules of engagement?”
“Yes, sir.”
“Could you tell me what they are, so I can be certain you’ve understood them all?”
“There are to be twenty-four men on my list. I am to couple with no less than two a day until the medic certifies I’m pregnant. No one can force me or take me if I’m not properly stimulated. However, I must allow the men the right to touch me so that I can be stimulated. I think that was all.” Cassie finished through clenched teeth.
“You seem angry now,” he observed.
“I am. I get angry every time I think about this ‘job.’ You know, back before the Terror Wars, women had equal rights. Now, we’ve fallen back to medieval ways. I joined the Corp, so I wouldn’t be sold into a marriage with a man I didn’t even know so I could breed him children. And yet the Corp expects me to do the same damn thing, except now I’ll have twenty-four damn men to please!”
“Now you see, there is a difference. The Corp doesn’t expect you to please twenty-four men. It expects twenty-four men to please you. You have the upper hand, Cadet Brown. You get to select the twenty-four men you want on your list. You get to decide when and where you want your pleasure. You are the one in control, because you are part of the Corp’s most important project.”
Cassie stared at him in disbelief.
“I can see you don’t believe me yet, but I give you my word, if you sincerely try to do this job, then in six months, you can have a transfer if you want out.”
“In six months, I could be pregnant,” she muttered.
“If you are, once the child is carried to term, you will receive a promotion of one rank and a transfer.”
Cassie was shocked. A promotion—that would be worth six months of torture in itself. “I’ll try it for six months, sir.”
“I hope that means you’ll try with the same dedication you’ve applied to flying.”
“Yes, sir.” She stood up, tugging down her skirt.
“Then, let me help you get off on the right foot before your commanding officer comes in. Underwear is not part of your uniform.”
Cassie blinked in confusion. “Are you saying I’m not allowed to wear underwear, sir?”
“No bra beneath the jacket and no panties beneath the skirt. Both impede the objectives of the program,” he explained. “You might want to get rid of them quickly, or you’ll start your new career off with a hundred demerits when Arial sees you.”
D2D
Links for many booksellers

About the Author
Liza O’Connor lives in Denville, NJ with her dog Jess. They hike in fabulous woods every day, rain or shine, sleet or snow. Having an adventurous nature, she learned to fly small Cessnas in NJ, hang-glide in New Zealand, kayak in Pennsylvania, ski in New York, scuba dive with great white sharks in Australia, dig up dinosaur bones in Montana, skydive in Indiana, and raft a class four river in Tasmania. She’s an avid gardener, amateur photographer, and dabbler in watercolors and graphic arts. Yet, through her entire life, her first love has and always will be writing novels.