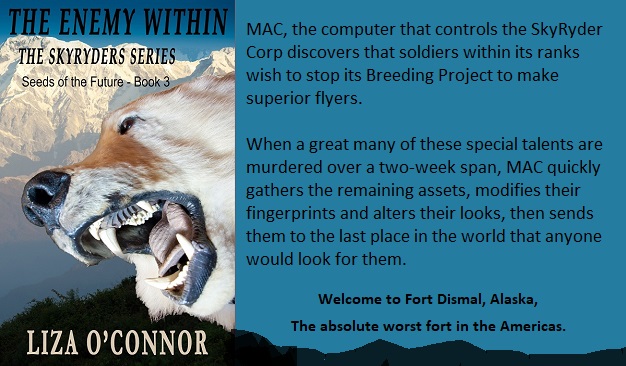 THE ENEMY WITHIN
By Liza O’Connor
Book3

BLURB
MAC, the computer that controls the SkyRyder Corp discovers that soldiers within its ranks wish to stop its Breeding Project to make superior flyers. When a great many of these special talents are murdered over a two-week span, MAC quickly gathers the remaining assets, modifies their fingerprints and alters their looks, then sends them to the last place in the world that anyone would look for them.

Welcome to Fort Dismal, Alaska,
The absolute worst fort in the Americas.

EXCERPT
A month later, the doctors declared Eliza fit to leave. Eliza was so pleased she wanted to leap from the bed and run out the door, but she feared that would only change their mind.

They lectured Colonel Polanski on a thousand things she was not ready to do yet. She stopped listening after they ran through every possible sex act. Clearly, the doctors were not happy men and did not wish anyone else to be happy either.

When he handed her a fly suit with the zipper in the back, she looked up at him. “Will I be riding on your back.”

“Very good.” He smiled. “What else can you deduce from your suit?”

She studied the fabric intensely. It felt odd…almost metallic. She petted the fabric across his groin and pulled her hand away before he could remove it. “I don’t think I’ll be saying good-bye to anyone.” Angie and she would never get to say good-bye.

“I’m sorry, but you won’t. The doctors have cleared you to leave tomorrow morning, but we’ll be leaving now. How did you know?”

“The suits…I think they must be the ones that turn invisible.”

“Right again,” he said. “Anything else?”

“This face mask has oxygen feeds. So, we must be going somewhere far away, and we’ll be flying the high winds to get there in a single flight.”
He kissed her on her lips. “That is an impressive brain hiding behind that beautiful face.”

“Not so beautiful anymore,” she complained. The doctors had reconstructed her face, but it was a very different face than she previously had. She did not mind the dark skin, but she preferred her prior perky nose and round eyes to her current narrow eyes and wide flat nose.

He gently caressed her cheek with his massive hand. “You’ll never stop being beautiful to me.”

She laughed and petted his eyes closed. “Poor Colonel, you truly must be besotted then.”

He nipped her hand playfully. “I am completely besotted with you, but fortunately that played to my favor. It meant MAC chose me to protect you.”

“I expect it was all those badges that impressed MAC, not your capitulation under torture.”

Eliza smiled. “I have a gift for you.”

His brows furrowed. “Is it small?”

“Then bring it with you. We have to leave now.”

Eliza sighed, disappointed she could not present it first, but she did as he commanded. However, her suit had no pockets in the front, so she had nowhere to put it. She handed it to him. “Will you hold it for me?”

He took the small package and studied it. “May I peek at it now?”

She shook her head, not wanting the opening of the present to be rushed.

Tucking it into his pocket, he handed her gloves and a facemask. He helped her put on her mask, taking great effort not to hurt her tender nose in the process.

With her hand securely in his, he disappeared right before her eyes. She reached out and touched him, laughing because her hand was as invisible as his arm.

“No more giggles,” he warned her. “You must remain completely quiet.” He then opened the door and led her out in the darkened halls. It was past midnight and there was no one around except for the security guard at the desk.

The colonel slowly nudged a pen off the edge of the desk and when the security guard leaned over to retrieve it, the colonel pushed a button on the panel. He then led her to the door and waited…and waited.

Eliza worried they’d stand here all night. Finally, the guard rose and locked down his board. He then walked down the hall on his nightly rounds.

Colonel Polanski triggered the door to open and the invisible colonel tugged her through the opening. Once outside, he caressed her body, and while his friskiness surprised her, she liked it. A moment later, he lifted her into his arms. Determining the location of his neck, she wrapped her arms around him and held on tight as he jogged across the field with her in his arms. When he almost tripped, she whispered in his ear, “I could ride on your back or run on my own.”

He stopped and guided her to his back and then continued to run. She was glad she had suggested the change. He would have killed them both if his hands had not been free when he leapt across the ravine. Even so, she thought it the eeriest experience in her life, to fly across the ravine on the colonel’s invisible back.

She could hear his breath only faintly when they finally arrived at the edge of the woods. He lowered her to the ground. Suddenly a snap of a twig alerted her they weren’t alone.

“Sloppy approach,” he chided someone.

Someone touched her shoulder. “Well, I’ve found the package, but where are you?” the voice complained.

She felt the colonel move away from her. Next, she heard the clanking of gear. She suspected by the shuffling noise, that the colonel was putting on his flight gear.

Someone touched her breast, then worked his way to her arm. Upon realizing the person was trying to assist her into her own gear, she helped as much as she could. Still, she found it very hard to attach her halter without being able to see it. Frustrated, she muttered soft curses. Soon someone with warm calloused hands took over the job.

Eliza liked the feel of invisible hands running over her chest, verifying all the straps lay flat and the belt properly buckled. It was only when the person helped her onto the colonel’s back and clipped her in, that she realized the hands had not belonged to the colonel. Finally, the invisible person located her right ear and placed an earpiece inside the canal. Then an oxygen mask covered her face.

Someone whispered in her ear, asking if she could breathe.

She started to nod but realized no one could see her. Amused at her own silliness, she replied verbally that she could breathe.
Finally, someone declared her good, and a second later, she rose into the sky.

D2D
Links for many booksellers

Social Networks
FOR MORE INFORMATION ABOUT
LIZA O'CONNOR
Investigate these sites:
Liza’s Multiverse Blog
Liza's Blog and Website   Facebook   Twitter
All the Many Books Liza has written
There is over sixty now.