Aliens on Earth ~ Where they might be...
by Paisley Brown

It was a picture of a glass igloo from the Kakslautannen Arctic Resort in Finland that inspired my new release, Sexy Suitors from Space. With the resort being that far north (above the Arctic Circle), I imagined aliens easily adapting to society up there without drawing any attention to their landing or integration.

And there are other places on Earth where that could happen. Or maybe it already has...

1. Hydrothermal vents in the ocean floor
Although the depths of the oceans are too cold for many organisms (that we know of) to exist, these geothermal vents located near the bottom of volcanoes allow hot magma to heat up the ocean to over 700°F. When scientists explored the vents around the Galapagos Islands, they found organisms they’d never seen before. Who’s to say there isn’t alien life down there, extraterrestrials that thrive in hot water and high levels of sulfur?
BBC Video

2. Dry Valleys in Antarctica
The largest ice-free region in Antarctica, the Dry Valleys is an anomaly. Instead of a thick layer of ice, the valleys contain mostly dirt and rocks. But, a few frozen lakes give way to small streams during the astral summer. Many compare the atmosphere here to that of Mars. If these valleys are already home to organisms who enjoy the extremes in climate, who knows if there aren’t aliens there who also enjoy the freezing cold?
Discover Magazine Video

3. Valley of the Moon in Brazil
First of all, the oldest rock formation on Earth can be found here. The large rocks that contain quartz have craters in them which form interesting formations for water to travel around, and for beings to hide. It’s something you really have to see through pictures. Though miners exploited the area long ago, it would be an excellent place for aliens to live today.

4. Stone Forrest in Kunming, China
This first wonder of the world exists in a consistently warm climate. (Great for aliens who cannot handle the extremes.) Stones stick out from the ground resembling a forest. The strange and steep landscape creates all kinds of labyrinths.
Video

5. Cave of Crystals in Mexico
One word – Superman. Yes, in a remote part of Mexico, there is the Cave of Crystals which resembles the Fortress of Solitude. The largest crystals in the world are found in a place with extreme conditions. At a constant temperature of 136°F and high humidity levels, this is a dangerous environment for any person without proper equipment. But maybe there are aliens who can handle this environment.
National Geographic Video

Now that my muse is running wild, I’d like to know what places on Earth you think extraterrestrials might exist.

To incite you imagination, here's my current book: 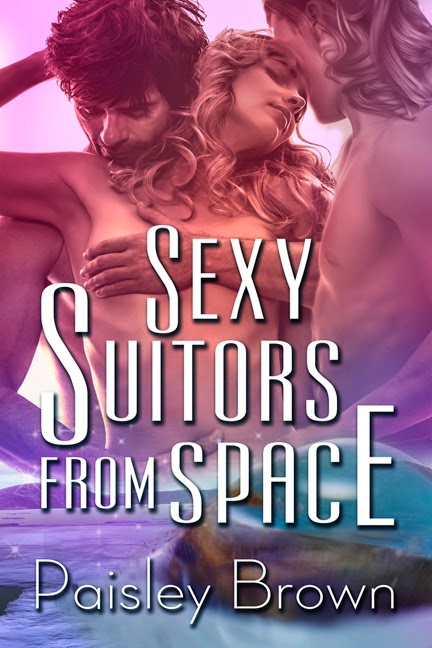 A vacation to the far North...

Heather is gifted a week away at a resort in the Arctic Circle by her grandmother, a chance to finally move on after finding her fiancé in bed with another woman.

With two Nordic hunks to keep her company...

The two sexy studs make it easy to get over her failed relationship. That is, until they tell her their secret.

Are the two men really extraterrestrials or just a fantasy created by her lonely soul?

PG-Excerpt
Some vacation. Nothing but snow for miles. I might as well have been visiting the North Pole with all the layers of clothing I had on. And, somehow, the cold wind still managed to find the small amount of face I didn’t have covered, stinging the skin around my eyes.

“Are we almost there?” I could barely see five feet in front of me, only the mountain of a man directly ahead. If he slowed down for one second, I’d grab his coat with one hand and cover the rest of my face with my free arm. But if I didn’t keep up, I’d get lost in the blizzard. “Seriously, is the place I’m staying anywhere nearby?” Every other hotel I’d stayed at had the check-in desk within the building. Apparently not this one.
The man didn’t respond, kept walking, guiding me, hopefully, to the glass igloo where my grandmother held a timeshare.

“Get away for a few days, Heather,” she’d said, handing me the plane ticket to Finland and shoving me out the door. “You’ll have a lot of fun and forget about your scum of a cheating fiancé. It’s been a year since you kicked him out. Time to move on. Show off your new curves.”

Sure, curves that I’d gained from spending a week eating nothing but ice cream. Not only had I gained ten pounds, but I’d started crying Ben & Jerry’s. It still hadn’t helped my pain. I’d loved Todd and wanted to spend the rest of my life with him. Unfortunately, my love hadn’t been returned. But, a trip wouldn’t make me forget what I’d walked in on two days before Christmas.

I’d tried to return the tickets. “Snow and cold really aren’t my thing, Grandma.” Give me a tropical beach somewhere with tanned, muscled men, and I’d at least try to get over Todd.

Refusing to take them back, she’d only patted my hands. “You’ll be surprised how much fun it is in Lapland. I would go, but I’m getting too old to enjoy the...amenities. It’s your turn now.” She winked and shut the door behind her.

And there I was, trekking through the knee-deep snow north of the Arctic Circle, dreading the blanket of white

I’m happily married with a naughty imagination. Sometimes all it takes is a whispered word or a sexy picture to inspire my next tale. My erotica stories may be contemporary, sci-fi, or paranormal, but all of them will leave you wet and panting for more. I also write science fiction romance as Jessica E. Subject.
Blog | Facebook | Twitter | Goodreads | Amazon