Today, Sci Fi and Reality come together as we watch a short, but superbly done, film on what is actually happening as a vehicle travels on the ground at 1000 mph.

In preparation for a World Speed Record in 2016, the 'car's' body shaped has been modified 12 times thus far. 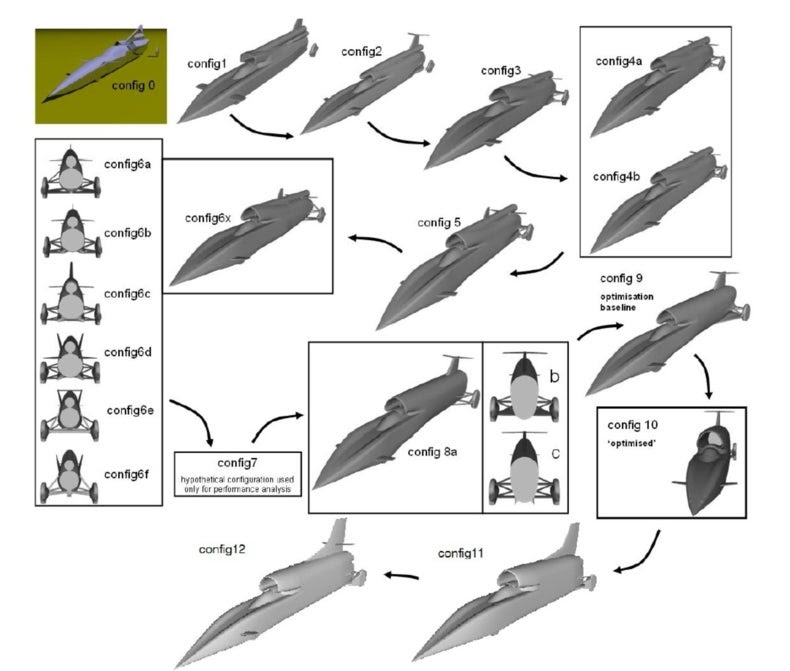 With the advent of supercomputers, the aerodynamics are now performed on a computer rather than by trail and error. (Improves longevity of drivers and car.)

To my surprise, the problem was not trying to keep the nose of the car from hydroplaning, but keeping the shock waves from lifting the back end.

After a 6 month optimization study, they created the Delta Fairing design which protects the base and belly of the car from the high pressure cushion that develops on the rear wheels when it breaks the sound barrier. This was a worthwhile exercise because otherwise at mach .09 it would lift off the ground and crash into a fiery ball.

Now the same people have create this new car, called BloodHound, which plans to break that record in 2016 by going 1000mph.

I find the name of the car a bit worrisome. Bloodhounds are not particularly fast, and while they do travel with their nose to the ground, as we've already learned, it's the rearend we need to worry about.

For the actual, more detailed, with a guy dying in on one video, Visit Scientific American