Baby it's Cold in Space, 8 Sci-Fi Roms, Liza goofs up 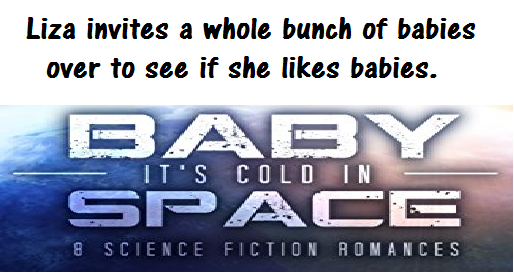 Okay, it's not the first time I've goofed up. These aren't the 'oh aren't they cute little things' babies. These are the 'OH BABY!' types of babies.
(I am so happy I was wrong!)
And there is 8 of them.
I cannot wait. 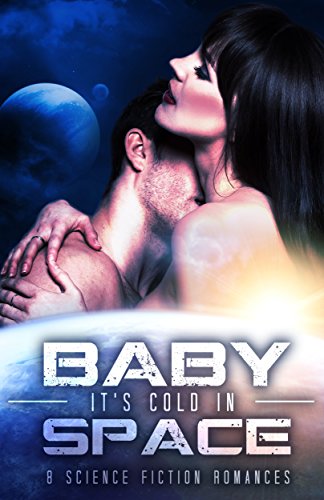 Travel off-planet for the holidays. Set thrusters to max with these steamy science fiction romance stories by eight exciting authors. Each SFR novella in this anthology delivers the perfect holiday gift—love—to warm readers during the coldest season of the year.

Included in Baby, it's Cold in Space:

I'LL BE ON NEW LONDON FOR CHRISTMAS by MARGO BOND COLLINS
When Gabi Esser joined the Galactic Coalition Fleet Marines, she dreamed of seeing the universe. Instead, she's sent to New London--the most backward planet in the Coalition--to protect one of its silly nobles during the holiday season. Now the duke she's guarding wants her to pretend to be his date at several Christmas parties, and she's more intrigued by him than she wants to admit. They can carry this off without falling in love ... but only in their dreams.

THECLIMATE OF LOVE: THE UTUQUQ CHRONICLES; BOOK 1 by BLAIRE EDENS
Sent on a research mission to Utuquq, a planet that's avoided the pitfalls of climate change, Lauren Hascamp has a year to learn everything she can to help scientists save Earth. Pukak, the Keeper of History for The Siku, the tribe inhabiting Utuquq, is drawn to Lauren and her stories of a world with no winter. Interest turns to passion, but when the priest who expressly forbade it discovers their affair, the couple is forced into the Unknown, a land of brutal cold and limited resources. Trapped in a dwelling made of ice, Pukak and Lauren must overcome the brutal cold, the lack of resources and the murderous intent of the Siku Priests if they have any chance at surviving.

SATURDAY NIGHT IN DEVILS HOLLER: A Contemporary Science Fiction Romance by DONNA S. FRELICK
Agents of the Interstellar Council of Abolition and Rescue tracked a slave-trading criminal across the galaxy to his latest location--Earth, where the pickings are easy and profits are guaranteed. Mingo County Deputy Sheriff Jace McCoy has a stack of cold cases on his desk--dozens of lost souls who have gone missing from his rural West Virginia jurisdiction. There's a kidnapper stalking the wintry mountain hollers, a killer with someone close to Jace's heart next on his list.To save her, Jace will need Rescue's help, and a whole new way of thinking about the stars.

STILL LIFE by JAYNE FURY
His future is her next target. Astrobiologist Ewan Stewarts won the chance of a lifetime: terraforming paradise from a cold lifeless planet. Sexy ninja freedom fighter Captain Jodeen Benson's mission is on a collision course with his dream. If she succeeds, she'll save millions of lives but destroy one: his.

THE SOLAR EXPRESS: An Alien Stepbrother Christmas Romance by ERIN HAYES
Kear'yl is a proud Vzekian space ranger who has fought great battles, defeated many warriors and traveled the universe, but there's one man she's always avoided: her human stepbrother Houston. But she can't deny that Houston's good looks and strong body set her three hearts on fire. When her stepmother plans a family Christmas on Wixilia VIII, and Kear'yl is tasked with picking up Houston from Earth to join their family, her spaceship breaks down in deep space, trapping them together. Kear'yl finds that her growing attraction to Houston may be the best Christmas present ever.

ANGELO 13 by ROSALIE REDD
Forbidden to express emotions, clone Angelo Thirteen longs to experience one feeling above all others--love. When a tenacious, young, female Altonian retrieves him from his drifting space pod, he may just get his chance.

STARGAZERS by DIANA RIVIS
She's traveled the multiverse on dangerous missions before, but this time her heart is on the line. Special Agent Kendra Voray of the Inter-Galactic Alliance is forced to work with Valon, historian and second born son of one of the ruling families of the planet, to determine how a Calivan artifact ended up on Earth hundreds of years before inter-dimensional space travel. Kendra doesn't have room in her life for relationships, but Valon makes her feel things she never expected.

LIGHT UP THE DARK: A StarDaemon Novella by SELENE GRACE SILVER
Twenty-something girls just want to have fun. How can Nadiah explore her sensual side when her overprotective father is a powerful telepath who reads and controls the mind of any potential mate? An impulsive joy ride to Jagron's sex palaces is her first opportunity to take a lover, but instead, she wakes up to find herself trapped in a space cell with a huge, mute alien. By the time they escape their kidnappers, she'll have more than a solo trip dirtside to explain to Daddy.

About the Authors
MARGO BOND COLLINS is a New York Times and USA Today Bestselling author of paranormal romance, contemporary romance, and science fiction romance. Her website is http://margobondcollins.net.

JAYNE FURY has worn the hats of personal chef, coffee roaster, copy editor, corporate drone, and Vegas cocktail waitress. She writes science fiction pulpy romance full of high-action, booty-kicking women and the men who fall head over heels for them. Her website is http://jaynefury.com.

ERIN HAYES is the New York Times bestselling author of the Harker Trilogy. Her website is http://erinhayesbooks.com.

ROSALIE REDD pens paranormal, science fiction, and fantasy romance in her office cave located in Oregon, where rain is just another excuse to keep writing. Her website is http://rosalieredd.com.

DIANA RIVIS writes science fiction romance and her novella, Star Gazer, was a finalist in the RWA FF&P 2016 On the Far Side competition in the category Hard Sci-Fi/SciFi/Futuristic fiction.

Angelo is from Earth
Earth people have removed all emotions.
And clones of non-emotional humans are common.
If an emotion develops, the clones will be reprogrammed.

When Angelo is rescued by Elle, he begins to have feelings for her.
Eventually, he wins her trust, and she wins his heart.
But when her negotiations with a vile, untrustworthy partner goes bad, he offers himself to save her, her ship, and her brother.

Will love be his demise or the salvation of them all?

This is a short, eventful, densely packed love story with just the right amounts of danger, cleverness, betrayal, and success.  But most of all a fabulous HEA.

A fabulous tale! Loved it!