We all know the quote from Arthur C. Clarke:
“Any sufficiently advanced technology is indistinguishable from magic."

But what happens when advanced technology comes up against what looks like actual magic?

I love both Science Fiction and Fantasy novels, and in my mind I’ve been playing with how those tropes would work together, how they could fit, but still stay true to their genres.

I wrote other novels, worked on other projects, but for five years I kept a notebook full of ideas. Eventually, I had an interstellar coalition, a lost colony planet, a splinter religion that rejected technology and generation ships. No matter how I prodded it, the background held up as a place to start telling stories.

After all that, what sort of story did I want to tell?  At heart, I’m a romantic.  How could I resist a romance between a soldier of science, and a healer from a world that turned it’s back on technology? 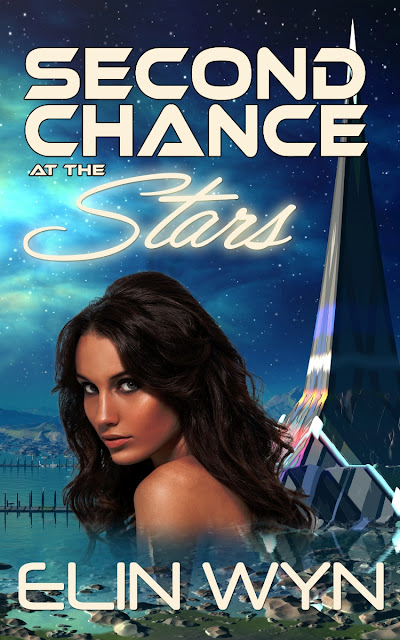 Here’s an excerpt from Second Chance at the Stars, the first book in a new series,- enjoy!

***
Demons. They really were demons. First the ghost pale one with the empty eyes, and now… Adena couldn’t drag her eyes away from the face of the man holding her. Taller, broader than any man she’d seen. And no one wore the midnight skin and golden eyes of her captor. She dared look a little more closely. Lady! His ears came to points through the close cropped black hair. She shut her eyes, frozen with terror, unable to handle any more.

He stopped, growled something unintelligible. A soft light glowed through her eyelids and he stepped through into the light.

A fresh surge of panic unlocked her body. Adena struggled to free her arms from the tangle of the cloak, to fight, to kick, anything. His arms just held her more firmly, pressing her face against the dark fabric of his vest.

Gasping, she breathed in his scent deeply. Warm, spicy, strange and faraway.

He stopped once more, and her eyes flew open. A long corridor stretched to either side of them. He growled again and the wall glowed, split open before her. She froze again in terror as he carried her through into the dimly lit chamber.

In three swift steps he crossed the room, and set her down. Adena gasped as she recognized the surface. A bed. She scrambled away, off the bed, away from him. Her breath came in wracking sobs. No. No. No.

Adena tensed, ready for him to spring forward, come at her. But he just stood there. Watching, waiting.

The demon raised a hand, and she flinched back, found the wall at her back.

And he gave what sounded almost like a sigh, and ran his hand through his hair.  “You are not a complication I welcome.”

He turned away from the bed and growled, unintelligible once more. Her heartbeat pulsed in her ears, but he only walked towards the wall, paused for it to open, and left.

Adena sagged to the ground as if the strings holding her taut had been cut. Now what do I do?

Frustrated, she undid the clasp at her neck, letting the fabric of the cloak puddle around her.

I’ve got to get out of here.

She stood, walked over to the wall the demon had walked through. She ran her hands over the surface. It looked like some sort of light wood, but was smooth and cool to the touch. And no matter how she pushed, the wall did not glow, never opened. And where would I go? She remembered the room she had entered with Beric, glossy deepest black, empty and vast. As if the room was unending. How would she find her way out again?

She turned to face the room. Maybe there’s something else in here I can use, or a switch, some kind of handle? Inventory. What do I have?

Before her was: One large, rectangular room. The dark, smooth floor was warm. One very large bed. At least, that’s what she assumed the padded surface she’d been deposited on was. Covered in a layer of fabric softer than anything she’d ever touched, it was easily twice the size of the one she’d shared with Matilde.  She turned her back to the bed, uncomfortable with what the bed suggested. One table, set against the third wall, with an equally over-sized chair.  On the table was her bag. When had he brought it in? Had he carried it in with me?

She ran to it, knowing there was nothing in the bag of any use, just clothing, an old sketch of her parents, a pressed flower from a picnic she and Matilde had taken one summer, long ago. She clutched the top of the bag, willing for there to be something she’d forgotten, something unexpected at the bottom, but there was nothing.

She tried to take a deep breath, but it was ragged, tight in her chest. What can I do? Nothing.

The panic turned to lead in her belly. There was nothing to do but accept it. She’d been given to the star men, the demons, as a plaything.

Adena bit her lip. No point in crying. This was the bargain she’d made.  She slid back down to the floor and clasped her knees to her chest. And then jerked back as the wall glowed again, but instead of the demon, a perfectly normal looking long haired black and white cat entered.

It circled, and sat, and proceeded to groom itself.

Then fixed Adena with bright golden eyes and asked, “Are you quite done with your fit?”

The book begins with bad news all around. Our heroine, Adena, must leave her cousin Matilda and go to the ship of alien devils. Her uncle Beric has tired of her resistance to ‘obey as he wishes’, so he ‘gives her to the alien devils and warns them she needs a firm handling.

Our hero, Nic, the commander of the ‘alien devils’ has been informed they are considering court martial for him and his brothers based on their last disastrous mission. He desperately needs this mission to be a success.

At first, Adena is terrified of the alien devils so different from her people. But when they prove to respect and even value her skills, they become her friends and Nic becomes something more, although getting past all the misunderstandings takes up half the book.  I’m not complaining. I absolutely loved every twist and turn. I loved how they were both able to look beyond the differences and see the fabulous people within.

And Adena proved to be as equally brave as the alien catlike creatures. (They don’t deserve being called devils. They seem to be the best men on the planet.)

This is the first book is a series, so there isn’t solid wrap-up at the end, but it’s enough to make me want to read more.  I loved the quiet gentleness of these giant aliens, and Adrena. I loved their protectiveness over Adrena; something she’s never had before. I love their integrity.

If you enjoy the world of the Garrison, I have a contest running at my site for designing a badge for the guys - please visit for more information:
http://elinwynbooks.com/garrison-banner-contest/

Or to individual shops:
https://www.amazon.com/dp/B01KNCYEHO