Empath Violet embarks on a new and desperate mission to find her missing lover.

Violet’s happy family is shattered when Athanor Griffin vanishes. The formidable Grand Master might have teleported anywhere in the galaxy. Violet strives to find her psychic partner, while looking after their baby and fulfilling his duties on the Council. Her frantic search uncovers a new threat to galactic civilization along with resurgence of the infamous Ixioth slavers. The Council dithers in response to her call for action, and even her former allies believe the Griffin is dead. She must risk her son, her psi-powers, and her life to rescue her beloved mate in the hope they can unite to fight the menace.

Even galaxy-trotting heroines need babysitters:
For most of the book, however, Violet hops from planet to planet in search of Athanor. 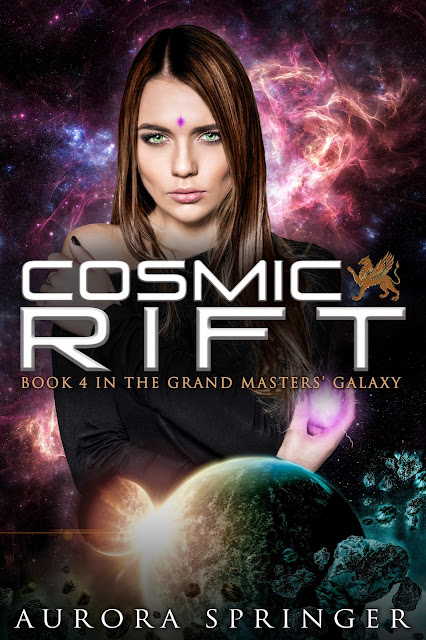 Excerpt
Violet grasped the Meilai’s hand and seized the thread of direction from Flatipus. The two women tapped their enhancers in concert. They flipped into the vortexes, crossing swiftly to the Southern Ocean.
They emerged on a beach of tawny sand. Fragments of shell littered the shore from the tideline above the lapping waves to the base of the craggy cliffs further inland. A line of people trudged toward a spaceship, poised ready for blastoff. Six-legged aliens with glossy black carapaces scuttled alongside the line of thin, hunched figures, the blue-hued inhabitants of the islands.
Shielding quickly, Violet flung a cloak of invisibility over herself and Ravaleen. Her swift action worked as far as she could tell. No one looked at them or raised an alarm. A small figure caught her attention by the dazed torment of her mind and wobbly legs. The scrawny girl stumbled and fell. The nearest alien lashed an energy whip at the cringing child. Whimpering, the girl scrambled back into the line. Her pain and misery seared into Violet, hardening her resolve to save them.
“What are they?” Ravaleen whispered, tilting her dainty chin at the slave masters. The aliens had a humped carapace like a beetle, six red eyes, and vicious claws on their forelimbs.
“Voids!” Violet swore. “I’ve seen their hellish kin in Athanor’s memories. They’re Ixioth slavers.”
Her tone rising in fury, Ravaleen hissed, “Kill them!”
“Wait,” Violet urged. “We must stop the spaceship. The holds are full of miserable slaves. Your people snatched from your domain. If we kill the slavers, the ship’s crew will take alarm and lift off with their wretched cargo.”
“You cripple the ship. My power is inadequate for such a task.”
“I’ll try. You stall those guards.” Shutting her eyes, Violet probed inside the ship. She veered away from the steel cold minds of the Ixioths and searched for the ship’s propulsion system. If only she had Athanor’s skill at detecting metals, sensing inanimate objects was not her forte. Swinging her mental probe from the raised prow to the base of the ship, she located a pulsing source of energy. Nearby, two Ixioths were intent on stoking the drive.
“Flatipus,” she called, “I need your help to smash the foe.”
The huge sea creature offered, “Flatipus can rock the island.”
“No. You will hurt the innocent as well as the guilty. I wish to harness your power for a delicate operation.”
“What?”
“Funnel your psi energy to me. I’ll focus our combined beam on the ship’s drive.” The tremendous power of the gigantic creature surged into her. Engorged with psi energy, Violet staggered a step backward. Gathering her amplified power into a psi weapon, she speared into the drive. She raised a barricade around the roiling fuel and expelled the heat into the ocean. The ship shuddered on its base, but did not topple.
“Ease your output,” she sent to Flatipus. The excess energy withdrew, leaving her weaker and tired.
Opening her eyes, she told Ravaleen, “The ship is stranded. Let’s free the slaves.”

What a delightful journey!
I was hoping that the Grand Masters would be better behaved now that Athanor was in charge of the group of sentient plants, animals, and other creatures. But the moment he gets abducted, it’s back to bad behavior, leaving Violet to not only care for their son, but to figure out what happened to her husband.  And I’ve got to say, it looks hopeless for a long while.

Aurora Springer is one of the most creative and imaginative authors of sci-fi that I know. Her books are unique, intelligent, romantic, and always satisfying.

And in my opinion, The Grand Masters series is her finest work. 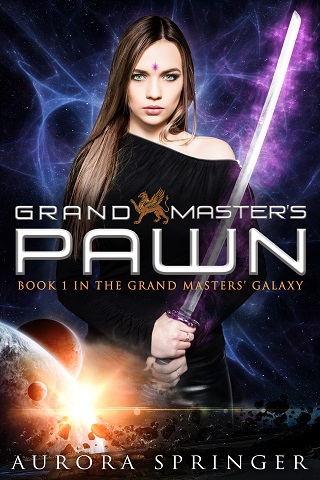 You can start the series with Book 1, Grand Master’s Pawn, for only 99c this month at Amazon  iBooks  Kobo  B&N

Author Bio
Aurora Springer is a scientist morphing into a novelist. She has a PhD in molecular biophysics and discovers science facts in her day job. She has invented adventures in weird worlds for as long as she can remember. In 2014, Aurora achieved her life-long ambition to publish her stories. Her works are character-driven adventures and romances set in weird worlds and described with a sprinkle of humor. Some of the stories were composed thirty years ago. She was born in the UK and lives in Atlanta with her husband, a dog and two cats to sit on the keyboard. Her hobbies, besides reading and writing, include outdoor activities like gardening, watching wildlife, hiking and canoeing.