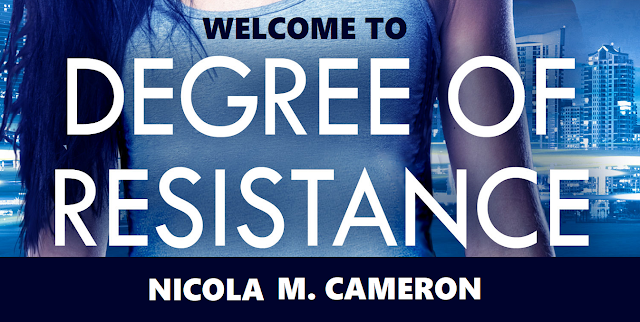 Big Money’s Going Into Space — But Fiction Is Already There

If you’re on Twitter regularly, chances are you’ve seen the promoted tweet from Goldman Sachs about how corporate money is looking to space for the next big influx of wealth. From petroleum products on Saturn’s moon Titan to the ability to harvest water, metal, and valuable minerals from asteroids, the potential wealth that’s out there is something that the forward-thinking investor should be looking into, according to the investment company.

Of course, science fiction has been mining the Moon, raising food on Mars and harnessing asteroids for decades. From the early days of the Golden Age of SF to Alien: Covenant, SF writers have always been fascinated with the idea of staking a claim on some lonely planet somewhere. One of the best recent examples is book and TV series The Expanse, which looks at the concept of a settled Solar system and the struggles of a small group to unravel a conspiracy that threatens peace in the system and the survival of humanity.

So the idea that Big Money wants to go into space, now that SpaceX is a reality and humankind is poised on the brink of a realistic and practical commercial exploration of our solar system, shouldn’t come as a surprise to anyone. What it should be making us wonder, however, is what the long-term plans are of such organizations that are looking spaceward with an eye to commercialization and colonization. I will admit to some bias on this line of thought; I’m working on a dystopian SF romance series that involves a society trying to save its wealthiest and most powerful citizens from a meteor that will sterilize the Earth by constructing a space station/ark that will orbit the Earth until it can be reinhabited. This is fiction, admittedly, but lately Real Life™ keeps gazumping me and turning what’s supposed to be an entertaining SF romance into somewhat alarming fact (travel bans, ICE deporting citizens, an administration spinning out of control). When I see tweets like this and think about the current US administration’s bizarrely dismissive attitude towards climate change, the writer part of my brain ponders, “Okay, do they really think there’s a Planet B? And if so, how the hell are they going to get there?”

At the moment, I don’t think the 1% have space arks. I don’t think. But I have to admit, Goldman Sachs does make me wonder. 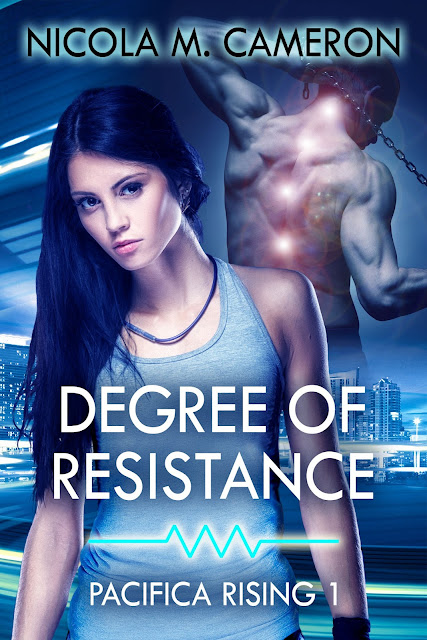 A perfect society hiding a terrible secret. An innocent man condemned to cyborg slavery. A brilliant woman determined to set him free.

Freelance tech Evie Contreras belongs to the Employee class of the Pacifica Protectorate, the “perfect society” that rose from the ruins of the West Coast. But Evie knows about Pacifica’s festering core and the secrets that keep it in power. And when she discovers that Pacifica has turned her fiancé Ben into a cyborg soldier/slave, she will risk everything to rescue him.

Saving Ben is the first step in a deadly game between Pacifica and a shadowy resistance group known as Rubicon. In return for Rubicon’s help, Evie must retrieve a hidden artificial intelligence that may hold the key to protecting Earth from a deadly new disaster.

Evie opened the control box wired to the pressure tank that took water from the Burgess well. A set of dusty but functional solar cells sat on a pole fastened to the tank, and insulated wiring led from the cells to the control box. “Okay, the well is definitely not dry and the battery is pulling juice from the cells, so it’s got to be a failure in the pump,” she said, rooting around in the bag of borrowed tools next to her.

Ben crouched down next to her, making sure he was in between her and any potential restart of the McBride/Burgess water war. “Think you can fix it?”

She gave him an “are you kidding” glance, then returned her attention to the dusty innards of the control box. She leaned closer, nose wrinkling. “Ew.”

Grimacing, she reached into the box and pulled out a small, stiff body. “I think it’s a deep-fried lizard. Can they chew on wires?”

He gingerly accepted the small corpse. The arid air had done a fine job of natural mummification on it. “Not as much. It might’ve peed on something, though.”

“Yay.” She peered deeper into the box. “Yeah, I think you’re right—looks like a contact got corroded. I can fix that.”

As she got to work, Ben kept an ear cocked to the radio clipped to his jacket pocket. After giving them a royal chewing out for taking an unauthorized beer break, J.C. was overseeing the repair of the War Wagon while a chastised Vince and company drove the bartered food and the wounded security officer back to the base in the Bandit. Rob had volunteered to stay behind as backup, and Evie’s presence had been requested at J.C.’s side once she was finished with the well pump.

He watched her frown in concentration at the control box. “There, that should work. I already primed the pump so—” She flipped a switch and the pressure tank rumbled before settling down to a satisfied gurgling. “Damn, I’m good.”

She squinted at him, patches of color blooming in her cheeks. He didn’t think it was because of the blustery wind. “Thanks. We better get back to the War Wagon.”

He got up and gave her a hand, hanging onto it once she was on her feet. She didn’t try to pull away, which was reassuring. “I’m sorry about punching the wall in your office,” he said. “I shouldn’t have done that.”

The corner of her mouth quirked. “I think you were justified.”

“I don’t, but thanks for that.” He stared at the hollows between the hills of her knuckles, the elegant strength of the hand. He never wanted to let it go. “I just hate the thought of you going back to Pacifica without me.”

The wind drove strands of dark hair across her face, curtaining it. “I know, but I don’t have a choice. Ballardie and I are the only ones who know how to shut down Lilith’s server. He can’t go so it has to be me. But I’m going to have Mark, Rob, and Lisa backing me up, and they’re all armed and extremely psycho. I’ll be fine.”

Ben wanted to smile at her description of the security officers. “Baby, you could head in there with a cyborg army at your back and I’d still worry.”

She snorted. “Is there anything I could say that would make you feel better?”

“Not really.” He brushed the hair away from her face. “I guess … I’m feeling useless right now because I can’t protect you, and I’m scared I’m going to lose you again, and if that happens…” He didn’t want to think about the yawning abyss that would become the brief remainder of his life in that case.

Those lovely russet eyes softened. “I understand about being scared,” she said, cupping his cheek. “That’s how I felt every time you went on deployment. I never knew if you were going to be in danger or not. All I could do was wait and pray that you came home.”

“Shit.” He pressed into the warmth of her hand, memorizing how she felt against his skin. “If this is how you felt, I’m sorry.”

“There’s nothing to be sorry about. It’s part of loving a soldier. I knew that going in.” Her thumb stroked his cheekbone. “But I also knew if there was any way for you to come back, you’d take it. And you proved me right. You survived twelve years under Camden, and you came back to me. So I’m telling you right now that I’m coming back to you, and I’m bringing Ally with me.”

He leaned down, pressing his forehead against hers. “You better. I don’t think I can live without you.”

“Same here. Twelve years was long enough.” Her lips quirked. “And as for you being useless, may I remind you that you just walked into a strange town alone, convinced an armed man to let you into his bar, singlehandedly negotiated a ceasefire between two crazy people, rescued a bunch of our guys in the process, and you didn’t fire a single shot or spill a drop of blood doing it. You’re about as far from useless as it’s physically possible to be.”

He considered what she’d said. Viewed in that light, it was kind of impressive. “I was just doing my job,” he said, self-conscious.

Her smile was blinding. “Well, you’ve always been my hero.”

Christ, he loved her. He pulled her into his arms, resting his cheek on top of her head. “I don’t know what I did to deserve you,” he murmured, “but damn, I’m glad I did it.”

“So am I.” She leaned back and kissed him, her lips cool and soft. “And I know this is kind of pointless to say to a hero, but try not to worry about me. The thing is—”

She shifted, her hands moving. He suddenly found himself on the cold ground, right arm straight up behind him with his hand flexed in a wrist lock and her foot braced under his shoulder blade. “—I’m not exactly what you’d call helpless.”

He huffed out a rueful laugh. He could break the lock with his augmented strength, but not without hurting her. And if he was honest with himself he was damned impressed that she’d put him on the ground so neatly. “Someone’s been practicing.”

“Yup. Rob’s pretty damn good at hand-to-hand, and I still remember everything you and Tio Christo taught me.” Her voice dropped. “I’m coming back, Ben. And I’m bringing our daughter with me. You’re not going to lose either of us ever again.”

The grip around his wrist disappeared. He rolled onto his back, staring up at the most beautiful mouth in the world. Upside down, he wasn’t sure if she was smiling or frowning.

She planted her hands on her hips. “You believe me, right?”

He grinned. “My momma didn’t raise stupid children, ma’am. I believe you.”


Bio:
Nicola Cameron is a married woman of a certain age who really likes writing about science fiction, fantasy, and sex. When not writing about those things, she likes to make Stuff™. And she may be rather fond of absinthe.
While possessing a healthy interest in sex since puberty, it wasn’t until 2012 that she decided to write about it. The skills picked up during her SF writing career transferred quite nicely to speculative romance. Her To Be Written work queue currently stands at around nineteen books, and her mojito-sodden Muse swans in from Bali every so often to add to the list, cackling to herself all the while.
Nicola plans to continue writing until she drops dead over her keyboard or makes enough money to buy a private island and hire Rory McCann as her personal trainer/masseur, whichever comes first.
Social Media links:
•       •    Website: http://www.nicolacameronwrites.com
•       •    Blog: http://www.nicolacameronwrites.com/blog
•       •    Facebook: https://www.facebook.com/nicola.cameron.1460
•       •    Facebook Reader Group: http://www.facebook.com/nicolacameronwrites
•       •    Twitter: https://twitter.com/YesItsNicolaC
•       •    Goodreads: http://www.goodreads.com/author/show/6623791.Nicola_Cameron