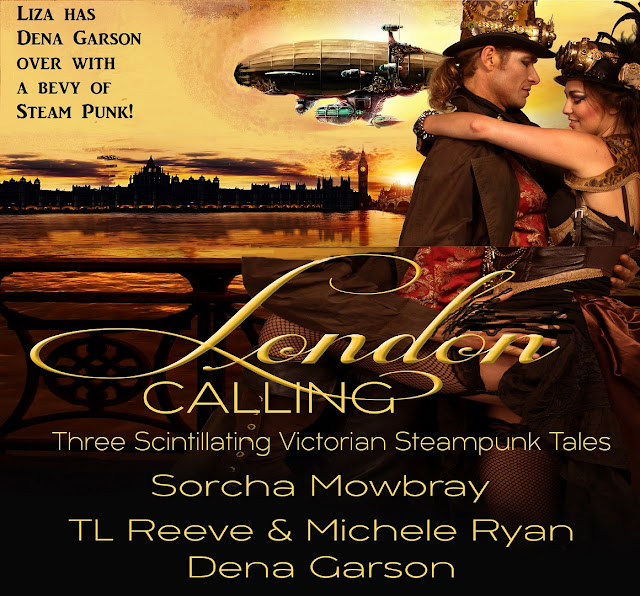 Hi, Liza!  Thanks so much for hosting me today.

I’m thrilled to be able to share news of the London Calling anthology with you and your readers. It was exciting to be included in this set.

The Victorian era has always been one of my favorite time periods. It was the topic of my senior paper in high school. I have always been fascinated by their fashions, manners, and general way of life. And when you add in the touch of whimsy that the steampunk culture brings and wow! I’m hooked.

Every con I go to I look for steampunk clothing or accessories. My plan is to put together several outfits since I can’t settle on any one look – the quirky adventurer, the spunky inventor, or the librarian with more secrets than she knows what to do with. If you have never looked, you can find corsets in every color of the rainbow. And each one has a different style. There are intricately designed leather goods for almost anything you can think of. And all of the gadgets and gizmos make my head swim.

Alas, my budget usually only allows me to buy one or two items at a time. But that’s okay. I can live vicariously through the characters I write about.

Be assured that they’ll dress spectacularly! 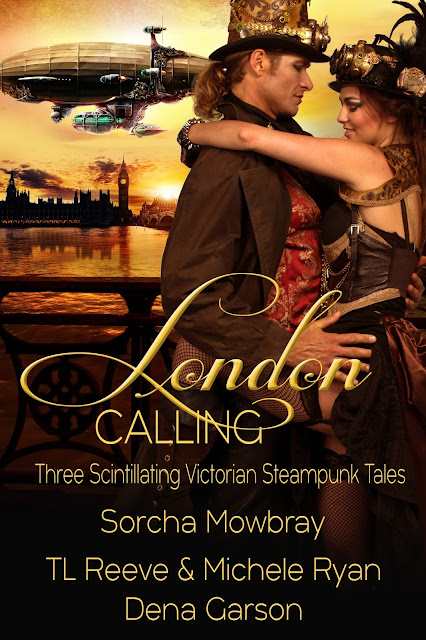 Take a journey to Victorian London where an assassin meets her match, zombies invade, and top scientists go missing.

Seducing the Assassin (The Ladies League) by Sorcha Mowbray
Josephine Stanton, Madame and assassin, has another assignment to eliminate an enemy of the Queen. Too bad John Griffin, The Earl of Melton, has no intention of dying. Neither of the pair expects the heat that steams them up between the sheets and ultimately sets New Victorian London on its ear.

Darkness Rises by TL Reeve and Michele Ryan
A zombie horde has invaded London, England. Jonah McRae and his band of ghoulish Dreadfuls are London’s only hope. However, when Annabelle Craig threatens his mission he doesn’t know whether to kill her or claim her as his. Can the hunter and the huntee team together to take down the horde? Or will London be lost forever?

Her Clockwork Heart by Dena Garson
During her search for her missing brother, Trixie is reunited with Nathaniel, the man she never stopped loving. Sensing that Trixie might be in danger, Nathaniel lends his skills as an investigator to her efforts. Their love is rekindled as they race across the country looking for clues to more than one mystery. 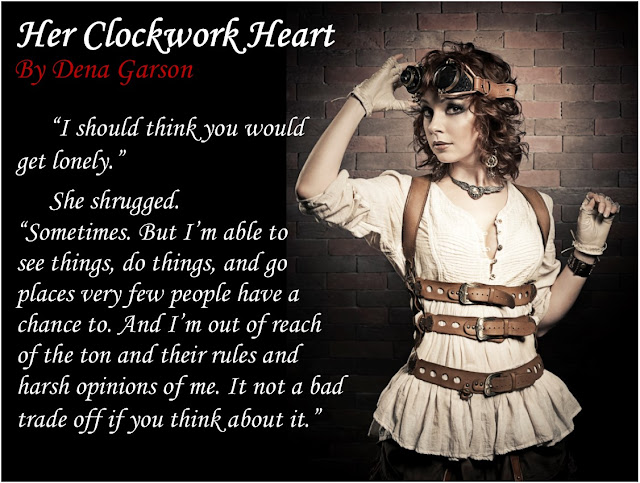 Excerpt From Her Clockwork Heart
by Dena Garson:

With a sigh, Nathaniel straightened his mess and tucked his notebook away in the breast pocket of his coat. He reached for the lamp to douse the light but paused when something banged against the wall of the records room.
Most of the RIO staff had left for the evening. By now he should have the offices to himself, with the exception of the security officer who patrolled through the night. But he would have sworn he recently heard the officer’s footsteps echoing down the hallway.
As silently as possible he exited the file room. At the door to the records room, he paused and listened. There were shuffling sounds, like boxes being moved about, as well as odd clicks and whirls. Almost like a clock with a gear out of alignment.
“No, not that one,” someone whispered on the other side of the door.
Was that a woman’s voice?
“Hurry. We don’t have much time.”
Again, no response to the whisper, but the clicking sounds multiplied.
Nathaniel checked the lock on the door. It had been opened. The intruder either had a key or a considerable talent with locks. The locks used at the RIO were unusual and gave even the most experienced lock picks trouble.
He pulled his derringer from his pocket then as quietly as possible turned the door handle. The last click of the latch set off a flurry of activity inside the room.
So much for a stealthy entry.
He positioned himself against the wall, yanked the door open, and leveled his gun on whatever he found inside the room.
Some kind of insect jumped off one of the file cabinets onto Nathaniel’s outstretched hand and pinched him.
“Ouch!” He shook his hand and tried to dislodge the bug, but it moved too fast. “What the bloody hell?” He bellowed when the bug ran across his arm then down his chest and leg to the floor.
“Don’t hurt her. She won’t hurt you,” a woman called out from the other side of the cabinet. “Nid, get over here.” Papers were shuffled and more clicks came from that side of the room.
Her voice was familiar. Nathaniel lowered his gun but kept it at the ready as he made his way to the other side. As he crept forward he looked left and right for more bugs. “Who is that and what are you doing in here?”
More shuffling of papers. A drawer slammed shut. The woman whispered, “Squeaks. Hopper. Get in.”
Nathaniel stepped around the end of the cabinets and leveled his gun at the person crouched next to the cabinet. He blinked in surprise at the woman who looked up at him. “Trixie?”
Beatrix Wadeworth froze with her hand extended to two small creatures that resembled a toy mouse and small rabbit. “Nathaniel?” She started to stand, then paused and scooped up the toys and slipped them into her pocket. “I uh…” She glanced behind him toward the door.
He took two steps forward and grabbed her by the arm. “Don’t even think about it.”
“Wh… what are you doing here?” she asked breathlessly.
“I work for the Royal Intelligence Office so I’m allowed to be here but you’re not.” He tightened his grip on her arm. “What are you doing here?”
Two of the bugs ran up his arm. He tried to brush them off, but only managed hit one of them.
“Nid, it’s okay.” She nabbed the one shaped like a spider. “Come here.”
“What are those?” They looked like bugs, but the whirling noise and clicks gave away the fact that they weren’t.
“They’re my, well…” She shrugged and dropped the one she’d taken off his arm into the pouch at her waist. “They’re my friends.”
“Friends?” One of her other toys scratched at his pant leg as it tried to climb it.
“Oh, sorry.” She reached for the creature but stopped when her face drew too close to an area of his anatomy that no proper young woman should be near.
“I’ll get it.” He released her arm, slid his pistol back into its holster, then plucked the tiny mechanical insect from his thigh. He examined it for a moment then dropped it into her open palm. The strange assortment of metal gears and parts were shaped to resemble a scorpion.
“Thank you,” she murmured.
“How many more of those do you have?”
“I only brought five of them with me.”
He opened his mouth to say something then shook his head. “You can’t be here.”
“What the deuce is going on in here?”
Trixie’s eyes widened with alarm. Nathaniel groaned. Great, the security officer had found them.

Dena Garson is an award-winning author of contemporary, paranormal, fantasy, and sci-fi romance. She holds a BBA and a MBA in Business and works in the wacky world of quality and process improvement. Making up her own reality on paper is what keeps her sane.
She is the mother of two rowdy boys, two rambunctious cats (AKA the fuzzy jerks), and a loving Labrador. When she isn't writing you can find her at her at the sewing machine or stringing beads. She is also a devoted Whovian and Dallas Cowboys fan.