FREELANCE EXORCISTS
A group of teenagers must work together to banish evil spirits
according to their own religious traditions.

This seven-book series will explore the truth and beauty that can be found in each faith.

Beneath all our perceived differences, our commonalities reveal deep truths about our existence. Beneath it all, we each hunger for a taste of the mystical.

Thrilling action, charming characters, wit, and wisdom combine in a story that will leave you wishing it were real...
...and thanking God it’s not. 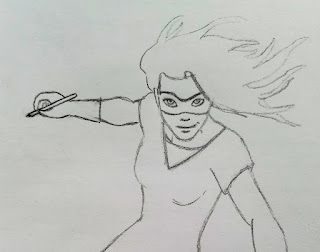 About the Author:
Janie St. Clair has lived most of her life lost in another world. She was frequently trapped in a faraway galaxy, a parallel dimension, or an ancient civilization lost to time. From an early age, she has been trying to entertain and inspire others, whether through acting, singing, dancing, painting, or writing. She has also lived with a fervent passion for studying the religions of the world and discovering the common beliefs that connect us all. Her current project, Freelance Exorcists, seeks to marry her two passions into one thrilling tale.

Book one of the series, Peter Hunter and the Minions of Mara, follows a boy on his journey through the wisdom and self-mastery of Buddhism. 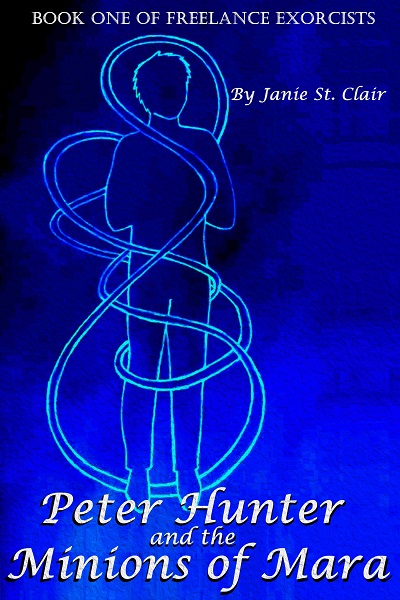 In the fall of his eighth grade year, Peter’s karate teacher told him that their town was overrun by evil spirits called asuras – the minions of the devil, Mara – and he wanted Peter to become his apprentice exorcist.

Peter thought he had enough on his plate with the normal stresses of teenage life: dealing with parents, fitting in, making good grades, and getting the girl. How could he possibly be expected to add “battling evil spirits” to the list?

Excerpt from Peter Hunter:
“Do you believe in spirits?” Peter’s karate teacher asked.
Peter felt a shiver run up his spine. “Like ghosts and stuff?” he asked.
“Almost every world religion has some belief of spirits either good or bad, who interfere with our lives. Even in Buddhism, there’s Mara and his minions, called the asuras. According to the Buddha, they tempt men and women to make choices that distract them from the way of enlightenment. Do you believe any of this?”
“I’m open to the possibility,” Peter answered. “Why?”
Sensei Rob took a breath. “When I was younger, I took a year to study in India. While I was there, I met this guy. A Tibetan shaman or guru, like a spiritual doctor. I witnessed him perform a ritual and save someone’s life. Afterwards, he told me that the spirits don’t just tempt people. Sometimes they take over their body.”
A fresh wave of goosebumps prickled Peter’s skin. “Are you talking like demonic possession?”
Rob nodded. “The guru, Yeshe was his name, said he could cast the dark spirits, the asuras, out of people and exorcise them.”
“And you,” Peter paused and raised an eyebrow, “believed him?”
“I wouldn’t have, if I hadn’t seen it for myself. When a dark spirit takes over a person, you can tell. I mean, weird stuff happens, but it’s more than just that. You know it’s evil. It reverberates within you, freezes you to the core. You can’t really say what it is, you just feel the evil. I saw Yeshe expel the evil from the guy and he went back to normal like it had never happened. But then, the strangest thing happened.”
“Stranger than everything else?” Peter asked dryly.
“Yeshe told me that I had been chosen to be his successor.”
Peter felt another chill up his spine.
“He said if I accepted the mission, I’d be able to save people from the asuras, too. So I decided to let him train me to be an exorcist. And that was about fifteen years ago.”
Rob paused. Peter waited for him to say something.
“Ok,” Peter bluffed a calm and disbelieving attitude. “Assuming this is true, why are you telling me?”
“Because you’re next.” 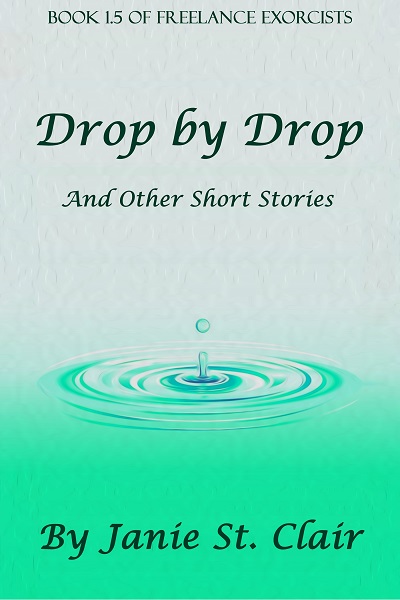 Book 1.5 of the series, Drop by Drop, is a compilation of short stories based on the characters from
Peter Hunter and the Minions of Mara.

Excerpt from Drop by Drop:
“And you’ve given yourself over to me,” the spirit finished the accusations. “Once a soldier for the kingdom of darkness, always a soldier. You are trapped. You are my slave.”
Rob wanted to cry. He wanted to be free, but the spirit was right. He didn’t know how he could possibly be free from this prison. At the thought, he felt his heart slipping into despair.
“Hello!” greeted a friendly voice.
Rob and the spirit both looked up at the Indian man, dressed in jeans, sandals, and a blue and white-striped button down shirt, standing just a few feet away. He had to have been in his forties or fifties, and he didn’t look very different from anyone else in the crowd. He smiled pleasantly as he held onto the strap of his messenger bag.
The spirit snarled at him, but the man merely chuckled in return. Rob wanted to tell him to run. The man’s eyes were filled with a friendly, innocent kind of warmth. Rob didn’t want this man to be hurt, and there was no telling what the evil spirit would do to him.
The man’s smile deepened. “I’ll not argue or bargain with you,” he spoke in Hindi. “And this is not a warning. It’s time for you to leave.”
Rob was terrified. Somehow, the spirit had gained too much notice, and now Rob was being kicked out of the market. Or maybe he would be arrested.
Then the spirit in Rob cackled wildly. “He invited me in!” it answered in the same language. “I am welcome here.”
“I would not be here unless your welcome had expired,” the man returned.
The spirit gnarled and lurched forward, but then it stopped. Rob’s feet were stuck. He looked down and saw blocks of ice somehow cementing his feet to the hot pavement. The ice was strangely unaffected by the Indian summer sun that baked the road underneath. Instead, even as he looked on, frost spiraled in tendrils up his legs.
As he marveled at the sight, a blizzard began swirling all around him. A tornado of ice and sleet blasted him from all sides, blocking out all other sights and sounds. The icy storm should have hurt him, but there were no cuts on his skin and Rob felt no pain or cold.
The spirit, however, howled and thrashed, rending Rob’s shirt. It cried out like a wild animal in the throes of death. But then, suddenly, it was gone. It was just gone.
Rob felt as if he were coming up for air after being held under water for too long. He looked at his hands, now under his control. He moved his fingers, then his arms to test them. He turned his head from side to side.
As the ice and snow faded, as quickly as they had come, Rob felt a rush of relief and exhilaration. Like waking up healed after an injury or sickness, he felt immensely grateful for the normal state of things. He wanted to sing, to dance, to shout and leap for joy.
Suddenly, however, he fell to his knees, acutely feeling the accumulated effect of the walking, fasting, and sleep deprivation. His stomach growled, loud enough for the whole block to hear.
The man in front of him laughed wholeheartedly. Rob watched him and noted how different his laugh was from the spirit’s. The spirit had laughed with contempt and malice. This man laughed with joy, compassion, and patience.
He held out a hand to Rob. “Come with me,” he said, “and we’ll find you some food.” 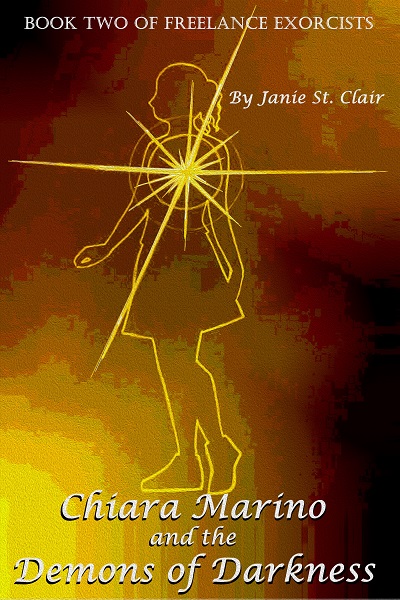 Book 2 of the series, Chiara Marino and the Demons of Darkness, follows one girl’s journey through the rich traditions and devotions of Catholicism as she rediscovers the beauty and strength found within her Faith.

Chiara Marino was a typical high school girl. Except that she was incurably nerdy. And she was a devout Catholic. Oh, and she could see diabolical entities that threatened to drag humans into the miseries of sin and death. But other than that, she was normal.

Then her life changed when a new student arrived at school. He seemed normal, too. Except that he had manners. And he saved her from a fatal accident caused by a vindictive demon. Oh, and she happened to see him glowing blue as he battled with a man possessed by an evil spirit. But other than that, he seemed normal.

Excerpt from Chiara Marino
The morning sun cascaded through the windows of the suburban home as Chiara Marino studied herself in the mirror. Her dark, curly hair was impossibly frizzy, her hazel eyes were too small, and her smile showed too much of her large front teeth.
I look like a mouse, she thought. A boring, plain mouse.
She finished with a sigh and pulled her hair into her signature style of a messy twist held in place with a pen. Simple and practical.
“It’s okay to admit defeat sometimes,” her older brother’s voice sounded from behind her. “Especially when something is a lost cause.”
He was standing in her doorway with his arms folded casually and his dark hair smoothed back with gel. His appearance was tall and dominating – muscular from years of athletics.
She fixed him with a scowl. “What do you want, Adrian?”
Then she nearly jumped when she saw a dark billowing cloud of smoke appear on his shoulder. As she tried not to watch, the cloud shifted in and out of a lizard-like appearance, digging its claws into her oblivious brother. It looked like a zombie iguana, with molting scales and rotting flesh hanging off skeletal features. It was the stuff of her personal nightmares.
This nebulous reptilian parasite was almost like another sibling to her. It had lived in their home for years, leaping from shoulder to shoulder and bringing out the worst in her family. It fed off their negativity.
She had been able to see these creatures for years and yet they still filled her with fear. She felt a chill in the air and the pressure of predatory eyes focused intently on her.
“Just here to remind you about the rules,” Adrian continued, unaware of his diabolical accessory.
Chiara held her breath as he strutted closer. “Right, right,” she agreed quickly and counted on her fingers: “No talking to you; no talking about you; and no telling anyone we’re related.”
“Good,” he pinched her nose tightly, knowing that she hated it. “Just follow the rules and I won’t have to punish you.” He slapped her cheek with a playful air, but the act had left a sting. “Have a good first day, dork.”
She sighed as she watched him leave. The exchange had gone surprisingly well.

Peter Hunter and the Minions of Mara and Drop by Drop
are already available on Amazon for download or paperback.

Chiara Marino and the Minions of Mara will debut this month.
Make sure to stay connected so you don’t miss the release: