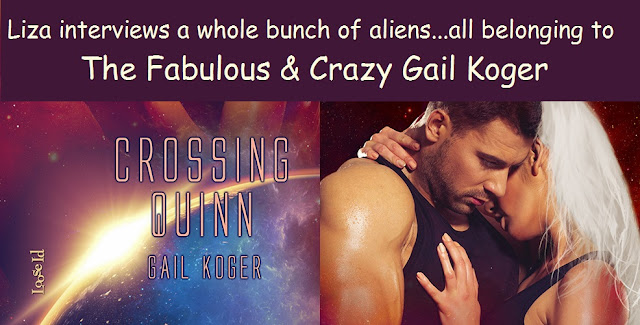 Today, I have invited Gail Koger over to share the crazy mob of aliens in her latest book.

Liza: Gail, I have long ago determined you write the funniest Sci-Fi novels since Douglas Adams died and thus had to stop writing. Is it possible that the soul of Douglas Adam has embedded in your brain and the two brilliant brains are what has created your latest book, Crossing Quinn? Seriously, this is the funniest Sci Fi Book I’ve ever read.

Gail: Thank you so much. It’s all those little voices in my head. They never shut up. Who knows? Douglas Adams might be in there too. Oh crap! All my characters in Crossing Quinn want to meet you. I mean every, single one. This is not good. Not good at all. How fast can you run? The var bugs are speedy varmints and once they latch on, it’s dinner time baby. They also leave all those nasty, oozing sores. And the rattling clicks they make, rivals the sound of a thousand angry rattlesnakes. Ugh.

Let’s not forget the Tai-Kok who are always ravenous, then again, so is little Clio, the baby Katanic shapeshifter.  So, we’ll need food. Lots and lots of food and a laser pistol or two to keep the monstrous Tai-Kok from trying to eat us. Which brings us to Dolon, Xenia’s backstabbing uncle. He will try to pull something underhanded and he’ll need zapping too.

Liza: Food is doable, but laser pistols? Fresh out.

Gail: Oh crap! The Coletti warlords will want to check you for any psychic abilities. Deny. Deny. Deny.  You are just a normal human. Got it?

Liza: But, I’m not psychic.

Liza: Really. I am not psychic.

Gail: Of course not. The next thing we will need is a first aid kit or a doctor for Xenia’s mother. She tends to faint. A lot. Her husband, Lysis is a Berserker and has a bit of a temper. No sudden moves. Do not pick up a weapon of any kind. Lysis has the tendency to shoot first and verify later.

Stay far, far away from Zarek, the powerful Coletti Overlord. If he finds out you have any psychic abilities, it’s wham-bam, you’re mated to a Coletti warrior. You do know their man parts are unique, right?
Liza: How unique?

Gail: They come equipped with tentacles. Yep, you heard me. Tentacles. Under no circumstances when you see them, should you shriek and run. The Coletti warriors love a good chase.

Liza: Hold on, this is a blog, not War and Peace Sci Fi style! I’ll let in five, but that’s my limit.

Gail: Okay, but you get to tell them. You do remember that Colettis warlords are very good at mind control?

Liza:  What the hell. Let’s invite them all.

Liza: I’ll start with Xenia. What is your fav part in this book?

Xenia: When baby Clio puked all over Quinn. The expression on his face was priceless. My second favorite part was when I got to kick Quinn’s arrogant ass. Coletti warriors don’t think they can be defeated by a mere female. Quinn didn’t know about my berserker abilities and he forgot to search my mother. Big mistake. My mother shot him with a tranquiller dart.  We chained Quinn up and locked him in a holding cell. Naturally, he found my warrior skills very appealing and fell in love with me.

Liza:  Okay, I wasn’t expecting any puking and my sources say you kinda cheated when you took Quinn down.

Liza:  Right. So, tell about your mother.

Xenia: She’s a brilliant archeologist, she’s highly intelligent, but doesn’t have a lick of common sense. She’s emotional, easily frightened, and she doesn’t follow orders. My mother has fainting down to an art form, and her singing is so bad it scares off the monstrous Tai-Kok!

Liza: Seriously, she scares the Tai-Kok? The bogymen of the galaxy?

Xenia: She does. They turn tail and run.

Liza: What about your father, Lysis?

Xenia: He’s the best father in the world and he’s the “Berserker”. Not even the Overlord is able to defeat him. I am proud to say, I have his berserker genes, which is why Quinn is...oops, I should say WAS tied up. Quinn, come meet Liza, she wants to know all about you. The warlord practically bristles with weapons.

Quinn: With Xenia and her mother on my ship, I plan on being armed at all times. Does the Overlord know Liza has psychic abilities?

Liza: Me? Nope. Not a bit. Moving along, let’s get to know more about that precious little princess in your arms, Xenia.

Xenia: This is Clio. She’s a baby Katanic shapeshifter. She’s extremely intelligent and can assume any forms. The Ta-Kok ate her mother and I got the pleasure of blowing the hell out of their base.  Clio is now part of my family.  We are sisters of the heart. The only problem is keeping her fed. Katanics have the appetite of a velociraptor.

Liza: Clio, you are such a pretty princess. I can’t imagine you eating anyone!

Clio: Me hungry. You taste good? She morphs into a silky black creature with massive tentacles.  A mouth with serrated teeth appears in her body.

Xenia: Huh?  I guess the interview is over.

Quinn: Too bad. There is a rumor going around that you’ve never been kissed?
Xenia: I haven’t. 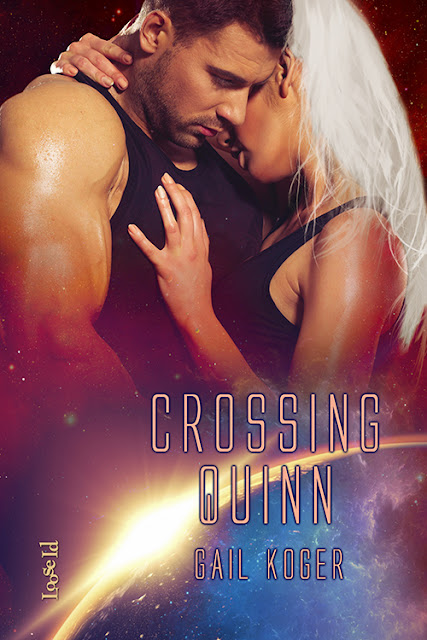 Quinn Jones is a formidable Coletti warlord. His mission is to capture Xenia and bring her back to Tanith to be mated with a warrior the Overlord has chosen. Problem is, Quinn finds himself falling for the beautiful Farin. Her unusual “psychic powers, combat training and berserker abilities” make her the perfect mate for him. How does he convince Xenia and the Overlord that she’s meant to be his?

Xenia and her parents are relic hunters who just discovered the fabled home world of the Nabateans. She isn’t about to leave the greatest find of the century to hook up with some Coletti. Not happening. Ever. No matter how many threats the Overlord makes or that he’s sending his best hunter to apprehend her. Okay, she’ll admit she’s drawn to the handsome warlord and she loves the way Quinn’s heavily muscled body fills out his black battle suit, but the egotistical jerk is about to get his ass handed to him.

When the galaxy is threatened with annihilation, Xenia and Quinn join forces to stop the murderous Tai-Kok. Fate has brought them together and nothing will stand in the way of their victory or their love.

“Find out how the Coletti is able to bypass my security programs,” my father instructed.

“Yes, Papa.” I waited until Dolon’s attention was on my mother before backing into the command center. I closed the door and turned to face the warrior. The direct approach was usually the best option when dealing with Coletti warlords. I took one look at the Coletti’s arrogant expression and decided to have some fun. “What did you say your name was again? Troublesome?” I shook my head. “No. That wasn’t it. Sorry, I’m not good at remembering the names of Zarek’s servants.”

“My name is Quinn Jones. I am Zarek’s hunter and I hold warlord status,” he responded with a dangerous glint in his eyes.

“Whatever.” I hid a smile. The egotistical ass really didn’t like my dismissive attitude. He had expected me to be in awe of his amazing good looks and the fact he held the prestigious rank of warlord. “My father wishes to know how you managed to circumvent our security protocols.”

Quinn shrugged. “I have my ways. Give me your coordinates, and I can help with your guests.”

“Four warriors against one? Not good odds.”

“You haven’t met my father, and it’s not your problem.” I severed the link.

The screen popped back on. “It is my problem if you’re injured or killed.”

“Let me set you straight. One. Papa is quite capable of dealing with our guests. Two. I might look harmless, but I’m not. Three. I. Am. Not. Going. To Tanith. Go start a war or steal some other female.”

“I will find you, and I will take you to Tanith,” Quinn promised in a quiet, scary voice.

Gak! Typical stubborn male. “Do you always do what the Overlord tells you?”

“Yes, and I never disappoint Detja.”

A smart male never did. “My father says Coletti warriors mindlessly follow orders and are ball-less. Is he right?”

Quinn raised an inquiring eyebrow. “Curious about a warrior’s body, are you, darlin’?”

I blinked in surprise. I had expected more threats, not for him to start flirting with me.

He grinned, pure devilry in his eyes. “Want a peek at my goods?”

For a brief second, I was tempted. His black battle suit displayed his heavily muscled form to perfection, but Papa hadn’t raised a fool. I plastered a love-stricken expression on my face and gushed, “Oh, I know exactly what you look like, lovey.” I projected the image of a wrinkled, hairy body with sagging male breasts and thick clumps of fibrous warts obscuring the groin. “Dead on, right?”

Why was he being so charming? Was it a delaying tactic? Did Quinn have a way to track my transmission? “A word of warning. No one messes with my father. Not even the Overlord.”

“Zarek’s eager to add a fire-starter and illusionist to the Coletti gene pool. What the Overlord wants, the Overlord gets. We can do this the easy way or the hard way,” Quinn stated, dropping his flirtatious manner.

Quinn had finally revealed his true self. A relentless hunter with a bit of a temper.

Gail Koger shows a true talent for Comedic Sci-Fi
I loved this book from the constantly fainting mother, to the sassy comebacks of the heroine. She fears absolutely nothing. Blowing stuff up to right wrongs is just a typical day for her.  While working on a planet with critters far worse than ticks & chiggers combined, her mother created a repellant so she could continue her archeological digs in peace. While it seems like such an inconsequential matter, it turns out to save their lives several times. Especially, when they discover the creatures love the blood of the worst group of aliens in the entire galaxy: The Ta-Kok.

In my opinion, the second most evil is the heroine’s uncle.

The third worst thing in the universe is a crappy fellow that runs the cleaning of crap in the tunnels of a planet...can’t recall which one, maybe Tanith. There are lots of planets in space if you haven’t noticed. This cretin ensured our heroine had a horrible time cleaning crap....not that anyone would ever want the job.

And these are just a few of the never-ending moments of near death, but very funny bits in this delightful story.

There is also explicit sex scenes with Xenia and Quinn near the end. Since Quinn is a Coletti and has different hardware than a human male, Xenia has a bit more fun than mere earthlings normally have. But hey, we can dream can’t we?


About the Author:
I was a 9-1-1 dispatcher for thirty-one years and to keep insanity at bay, I took up writing. Not to worry. The insanity isn’t catching – much. Other than the addiction to chocolate and the twitch in my left eye, I’m good. Next up in the Coletti Warlord series is Shenanigans.