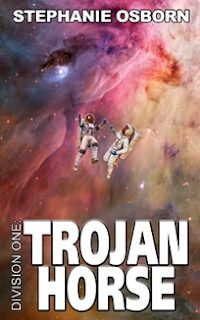 Now available: Book 5 in the Division One series, Trojan Horse!
After returning the healer Doron to his homeworld of Edeptis, Echo takes Omega on a training run to make her a Pan-Galactic Coalition-certified starship pilot—celestial navigation, extra-vehicular activity, emergency repair, planetary surveys, you name it. And he secretly delights in seeing Omega’s joy at finally fulfilling a childhood dream.

But when the Cortians show on the scene, intending to take Alpha One into custody for crimes against the Cortian Amalgam, the resulting space dogfight severely damages the Trojan Horse, causing it to crash on a primitive protoplanet. Both Echo and Omega are badly injured, and it will take both of them working together to survive in the wreckage, while more Cortian vessels search for them overhead, and Fox and the rest of Alpha Line try to fight their way through to rescue their friends and colleagues.

Award-winning author Osborn is a 20+-year space program veteran, with multiple STEM degrees. She has authored, co-authored, or contributed to more than 30 books. In addition to the Division One series, she currently writes the critically-acclaimed Displaced Detective Series, described as “Sherlock Holmes meets The X-Files,” and the Gentleman Aegis Series, whose first book was a Silver Falchion winner. She “pays it forward” through numerous media including radio, podcasting and public speaking, and working with SIGMA, the science-fiction think tank. Osborn’s website is http://www.stephanie-osborn.com.

Division One series book five, Trojan Horse, will be released in ebook formats on 9 January 2018, and in trade paperback format on 23 January. Additional installments in the ongoing series are anticipated later this year.