Calan is a smart, sexy psion with a talent for making people see things his way. Parlor tricks, he calls them.

Ajha Lann, a dawning psion grew up under the wing of an older girl. Together they scrounged for food and avoided capture by the gangers in the ruins of Farringay. Left on her own when Mikki is captured by gangers, the voices in her head seemed to get louder but one presence is stronger than the others. It gives her hope of something better for her future.

Calan Narcaza’s mother, the former Michelle Marlow was born in the ruins Farringay outside the Starport Compound. Little had changed since his father went to Earth to find Chelle and claim her as his mate. Calan knows the dangers, but he has felt Ajha Lann reaching out to him for several years. He knew that for her to reach him over such interstellar distance could only mean that she was his psion mate.

His brother Jamerin brings Calan to Earth in his starship, though he is skeptical about leaving his baby brother on his own. Then they find a cyborg in stasis at the industrial complex that Calan bought to give refuge to the people struggling to survive in the city ruins. They wake him.

Calan and cyborg Rax Ven become allies building the Refuge together and facing off with the Overlords and gangers in a final showdown. 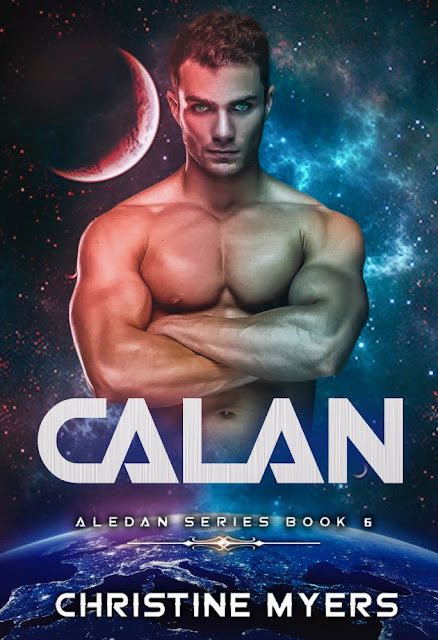 “I see your female has arrived,” Rax said as Calan shuffled into Unit Five of the first six flats.

“Your one true mate,” Rax replied. “We cyborgs call her our female.”

“Yes, in that sense, she is my female. We are psion mates.”

“You’re a minder?” Rax said with a touch of awe.

“Some people call us that. I am a multifaceted psion. I read minds, can send thought, and am a psionic healer as well as a physician,” he said. “Is that a problem?”

“No, I just knew there was something different about you and your brother and his mate. Cyborgs have something similar through our cybernetics,” he explained. “But we can’t move things with our minds.”

“But you have other useful skills,” Calan said.

“They called us killing machines in the news archives. I spent some time catching up on what’s happened in the world since I was created,” Rax said.

“We have a lot more in common than you think,” Calan told him. “I was conceived in vitro as part of a research project my father was doing. I would have been grown in a nurturing tank like a cyborg, but my mother wouldn’t hear of it.”
“What did she do?”

“She made him put me into her body so I would grow inside her the same way my brother and sister did,” Calan said. “To this day, they use a modern version of the nurturing tanks they used to grow cyborgs to grow embryos outside a mother’s womb. But we don’t accelerate them like they did cyborgs. They come out as babies.”

“I had a virtual childhood,” Rax said. “It seemed real to me. They sent me to virtual military school.”

“But your subroutine has been revised for the security of a large facility.”

“I also downloaded protocols for maintenance of a facility such as this,” Rax said. “So far there is not much to secure.”

“That may change as we start filling this place. There’s bound to be conflict,” Calan said. “You should probably research negotiation practices for future reference.”

“For when we start filling this place up.” Rax finished attaching the last waterline. “Can you read me?”

“I can,” Calan whispered the thought into his mind.

“I just have my flat left to hook up to water and power. The bots are cleaning the rest of this wing of the building including the rooms that are sectioned off.”

“We’re making progress. I’m guessing some of the rooms were offices and the others were special departments. I have the schematics of this building from when the cyborgs worked from here.”

“I reviewed them,” said Rax. “They didn’t make many changes.”

“Where there are rooms sectioned off, we will convert them into living space. We will put my clinic in the second apartment and an infirmary in the west wing.” Calan continued. “When you finish your quarters, we can start on the rooms in the front section---getting water and power to them.”
“Yes, Calan.”

“But there is no rush on it. As we get people to join our community, we will teach them how to pitch in and help.”

“How are you going to get them to come?”

“I’m going to open my mind and send out an invitation.”

Calan grinned at the cyborg and walked back to his flat. Ajha was still asleep, but he sensed she was restless and she wanted him to come to her. As he felt her distress, he jogged the rest of the way back to his flat and went into her room.

“Mikki! Mikki, no!” she murmured and cried in her sleep.

Calan picked her up off the bed then sat down with her in his arms. “Ajha, you’re dreaming sweetheart,” he murmured, holding her cuddled in his arms.

“Calan?” Her eyes fluttered open, and she looked up at him, searching his face anxiously. “You’re real! I did find you.”

“Yes, you did,” he said, savoring the feel of her in his arms. “If you hadn’t I would be looking for you right now.”

“Those bastards took Mikki,” she sniffled. “And I don’t know where she is.”

“Do you know who took her?”

“I don’t. They were probably going to use her in one of the overlord’s sex houses. Redmyn Berke controls most of them,” she told him. “But I don’t dare go near the place, or they’d grab me too.”

“Redmyn Berke. Who would have thought he’d still be that powerful after all these years?”

“My mother did before she met my father. She tried to leave him, and he sent three guys after her. Berke let them have her for the night.”

“And she told you this?”

“Mom and Dad didn’t want me to come here because it’s so dangerous. When Dad came to get her, Berke had one of his henchmen shoot my father. Mom barely found him in time to save him. She is a healer like me.”

“But you came anyway,” she said.

“Because I felt you reaching out to me just like you did just now,” Calan said. “That’s how I convinced them that I had to come back to Earth.”

Ajha smiled faintly at him, wishing he would kiss her. He smiled back and lowered his lips to hers in a tender caress. At least it started that way, but desire quickly flared between them, a passion that had been simmering for a few years since their minds first touched.

She opened her mouth and tentatively probed his lips with her tongue. He opened and swirled his tongue around hers, deepening the kiss.

Ajha wound her arms around his neck and caressed his head and neck. She moaned softly as she felt the love emanating from his mind---not in words but pure emotion rippling through her mind. Combined with their growing arousal, Calan knew he could not wait to claim her as he planned.

Her physical need to couple with him was thoroughly entwined with her emotional need. They helped each other off with their clothes then lay back in the bed together and went back to kissing as they pressed their naked bodies together.