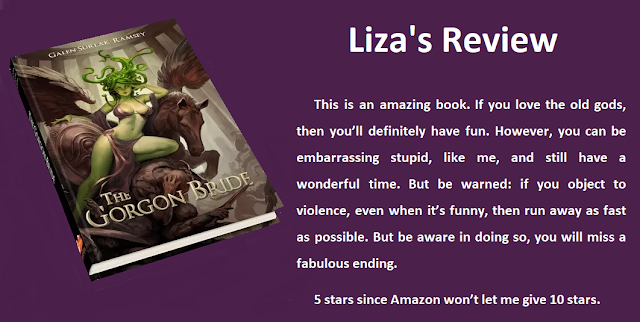 Before we get to the fun questions, can you summarize your book, The Gorgon Bride, quickly?
The Gorgon Bride is about a guy named Alexander Weiss who discovers that the Greek gods are real—but not before he manages to insult Athena, Goddess of Wisdom. Partly out of punishment, partly for her own amusement, Athena gets him sent to a forgotten island that happens to be the home of Euryale, a gorgon, and Medusa’s sister. Like her sister, Euryale turns people to stone and has a nasty temper that plays a role in the book.
Without giving too much away, plot wise, shenanigans quickly ensue due to all sorts of Olympian politics and bickering that Alex finds himself in the middle of that involve both him and Euryale. If Alex is going to survive not only the wrath of a few gods and goddesses, but a number of insane quests and ravenous monsters, he’s going to have to become a hero of legend as well as make some personal growth.
It’s a very fun, wild romp through Greek mythology. Think Christopher Moore, not George R.R. Martin in terms of tone.

Where did you get the idea for the plot?
The idea started off with me wondering what it would be like if the Greeks had it right, and everyone from modern time who died—without the proper coin being buried with them, obviously—suddenly found themselves stuck on the River Acheron where the ferryman only takes you to the land of the dead if you have money. That’s the second scene in the book, and I thought it was really funny.
So after I had that scene written, I wrote the first scene (how did Alex get there?) and then kept asking questions. Why did this happen? What is this god doing? What is that goddess doing? And get trying to get it all to weave together to make a good story.

What did you edit out of this book?
Oh geez, so much. The first attempt was a disaster. I ended up having to rewrite probably the last third completely as well as go back and actually make the characters likeable. The second attempt, while a lot better, was met with one reader (Nicky Drayden, author of THE PREY OF GODS, who eventually gave the blub) a long time ago who loved the first half, but then said the back half didn’t work because XYZ.
So I rewrote probably 2/3rds of it to finally get to the plot that’s mostly there now. Then it took a few more rounds of minor edits and buffing out weak points. So, all said and done, I bet as much didn’t make it on the page as what finally did.

How many unpublished and half-finished books do you have?
As I’m writing this, too many. I can think of two separate series with four books total that are getting there (one series is a dark, gaslamp fantasy; the other is basically Doctor Who meets Indiana Jones set a thousand years in the future).
Then there are three different novellas that will hopefully be done this year which are also in the pile (guy abducted by aliens and stuck into all sorts of weird places for their amusement). Finally, there’s a stand alone sci-fi novel that has series potential, and pieces of two other novels as well. So what’s that, 7 novels and 3 novellas?  Oh yeah, there’s one I’m almost done with too that’s a fun sci-fi. So 8 and 3.
Hopefully that will change “soon.” So if you like The Gorgon Bride or my first book, Little Computer People, I’ve got more on the way.

Do you Google yourself?
I have, but not regularly. I’m afraid I’m boring online—but only because I grew up before the internet really took off. I shudder to think what trouble I’d be in if my teen years were caught be the interwebz.

Would you rather be a tree or have to live in a tree for the rest of your life?
Live in a tree for sure. I could totally do that. Always loved the Swiss Family Robinson house at Disney. Do I get monkey butlers, too?

Would you rather be completely invisible for one day or be able to fly for one day?
That’s a no brainer for me. I’d totally want to fly. I’ve got a little over 600 something skydives under my belt, and even was an instructor for a few years teaching others to fall out of an airplane and live so they could do it again. Being able to fly is right up my alley. And honestly, I’m not sure what I’d do with invisibility as I’ve no intense desire to sneak around.
But if I woke up one day and could only turn invisible, that would be pretty fun, too.

Anything else you want to add? 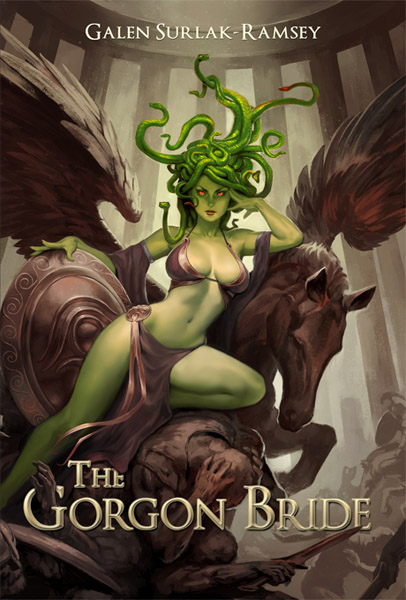 Sure! Just some shameless plugging. The Gorgon Bride will be on sale July 10, 2018. You can find it on Amazon (https://www.amazon.com/Gorgon-Bride-Galen-Surlak-Ramsey/dp/1946501093/), B&N, and pretty much anywhere else. If you order it directly from Tiny Fox Press, I’ll even sign it for you (http://tinyfoxpress.com/product/the-gorgon-bride/).
Also, drop by my website and shoot me an email if you like: http://galensurlak.com/ There’s also a newsletter sign up there for people who like free stuff, contests, and whatnot.
Twitter: @GSurlak
Thanks for having me!

Here is Liza's full review of the Gorgon Bride.

Review of the Gorgon Bride by Galen Surlak-Ramsey
Alex’s life took a dramatic change when a full-grown orca landed on his head.

After that, matters get truly strange. Mind boggling strange as Alex, a mere half-dead human, joins the Gods of our past. Turns out they are, in my opinion, please don’t throw whales or lions at me, an ill-tempered, unreliable, vindictive, sorry bunch of spoiled brats who like to torture everyone, if I do say so myself.

Never has a human been so tortured, eaten, and abused as much as Alex. And yet somehow, in the midst of all his troubles, he falls in love with a Gorgon. You know, the creature with snakes rather than hair, who can turn you into stone by a single glance. Yep, that’s what Alex fell in love with. On the positive side, being mostly dead, but not entirely so, Alex can’t be turned into stone, so he is probably the only person the Gorgon,  Euryale, could safely fall in love with.

And thus begins, the most demented love story ever. The troubles are not with the happy couple, they get along just fine. Only all the gods, semi-gods, spoiled brats, and resentful thugs get involved and keep telling poor Alex of challenges he must take before the two can be together. Sadly, he listens to them. They even drag in his old girlfriend to cause more trouble.

Would taking a class on Ancient Gods improve your fun reading this? Possibly, but I had a ball, well giant stone boulders that some cretin was tossing at Alex. I can’t remember the cretin’s name, but that didn’t reduce his danger nor my fun one bit.

This is an amazing book. If you love the old gods, then you’ll definitely have fun. However, you can be embarrassing stupid, like me, and still have a wonderful time. But be warned: if you object to violence, even when it’s funny, then run away as fast as possible. But be aware in doing so, you will miss a fabulous ending.

5 stars
only because Amazon
won’t let me give it 10 stars.