Today, I am interrogating S.L. Dunn about his book, Anthem's Fall.

Liza: Yes, there is. SL is giving away a $50 Amazon or BN Gift Card to one lucky person who enters the rafflecopter.

But first let's get to the interrogation, but be warned: I’m in a bit of a mood, so don't expect me to behave.

Liza: What's the best piece of advice anyone has ever offered you about writing?

Liza: I hope you had a séance, because I advise against digging people up to get their advice. However, he did give you good advice. You put the heart into your book during the first draft, but make it readable during the rewrites. So tell me, what part of your book took you most out of your comfort zone?

SL: Anthem’s Fall definitely leans more toward action-adventure than romance, but there’s a bit of romance in there. For me, the hardest scenes to write were the romantic ones. It’s a fine line between sappy and cold, and delineating that line was no small feat.

Liza: Totally agree with you. I just let my characters say and do what they feel like, because they can find the line better than me. How'd you come up with this story?

SL: The idea for Anthem’s Fall came to me as I was driving on a highway in Vermont. There I was, totally spacing out, when the veiled forms of three characters presented themselves to me all at once: the genius, the dreamer, and the leader—and between them all a technology of inconceivable power. It was like my muse hit me upside the head!

Liza: For the safety of a Vermont drivers, I will have to let the state troopers know you are driving while intoxicated with ideas from your characters. So let’s pick up the pace. They could arrest you any moment. Describe the hero in five words.

Liza: And the heroine.

Liza: Oh I like the attributes you gave the heroine. Who's your favorite character in the book?

SL: Kristen Jordan, my heroine. Anthem’s Fall reads like a superhero novel at times, but Kristen’s point of view anchors the story in a way that is unique to the genre.

Liza: I’ve got to read this. What's your favorite line in the story?

SL: Collateral damage is an unfortunate byproduct of any revolution, social or scientific.

Liza: That sounds like capitulation of responsibility to me. But before we sink into a philosophical quagmire, let me move on to a lighter question. How does the reality of being a writer compare to that of TV author, Castle.

SL: I would say it’s significantly less interesting. Writing involves a lot of sitting and staring at the wall or a blank screen. My imagination might be far away, immersed in cities falling to ruin and people thundering across continents, but in reality I’m just sitting on a squeaking chair and staring at a Microsoft Word document.

Liza: I’m so with you there. I’ll think a few minutes about a potential scene and the next thing I know, it’s midnight. Here’s another comparison, but this one is at least real. How is your life different from Stephen King’s?

SL: For starters, the royalty checks might look a little different. Praise and fortunes aside, Stephen’s writing process and mine are very different. I know this because his book, On Writing, is one of my favorite works related to the craft. It might sound crazy, but Stephen rationalizes the writing process by thinking of it as plumbing—he gets up every morning and he goes to work. He doesn’t get caught up in his own head or allow himself to get melodramatic about the process. I’m getting there, but my process has more highs and lows, (and probably looks at first glance more like his younger, more tumultuous writing years).

Liza: I bought his writing book myself. I especially enjoyed the section where he shared being run over. That was very real life creepy. Now I have the creeps. Tell me a good joke to chase the creeps away.

SL: This is a David Foster Wallace quote. Not a joke really, but I like it anyway:
Two young fish are swimming down a river. An older fish swims by the other direction. The older fish turns around and calls out, “Water’s nice today, eh?”
The two young fish look at each other, bewildered. Then one says to the other, “What’s water?”

*Crickets chirp as Liza tries to find the humor*

SL:  In seventh or eighth grade my friends and I tried to recreate scenes from the new television series “Jackass” and went around doing dumb things around the house.
I intentionally rolled head over heels down a flight of stairs. It was shocking how much momentum one little stairway can create, and it was nothing short of a sheer miracle that I didn’t knock over the Christmas tree at the base of the stairs. The video footage must still be out there somewhere…

Liza: Final question: If you had to live on a deserted island with one author, who would it be?

SL: Bear Grylls. He must have some sort of autobiography out there, right?

Liza: You might regret that choice. Bear will make you eat slugs and drink your own piss. He’s one crazy dude.

Space Rep: The book sounds good, can we get to that now?

Liza: Yes, we can. SL Dunn has been interrogated enough. Let's check out the book. 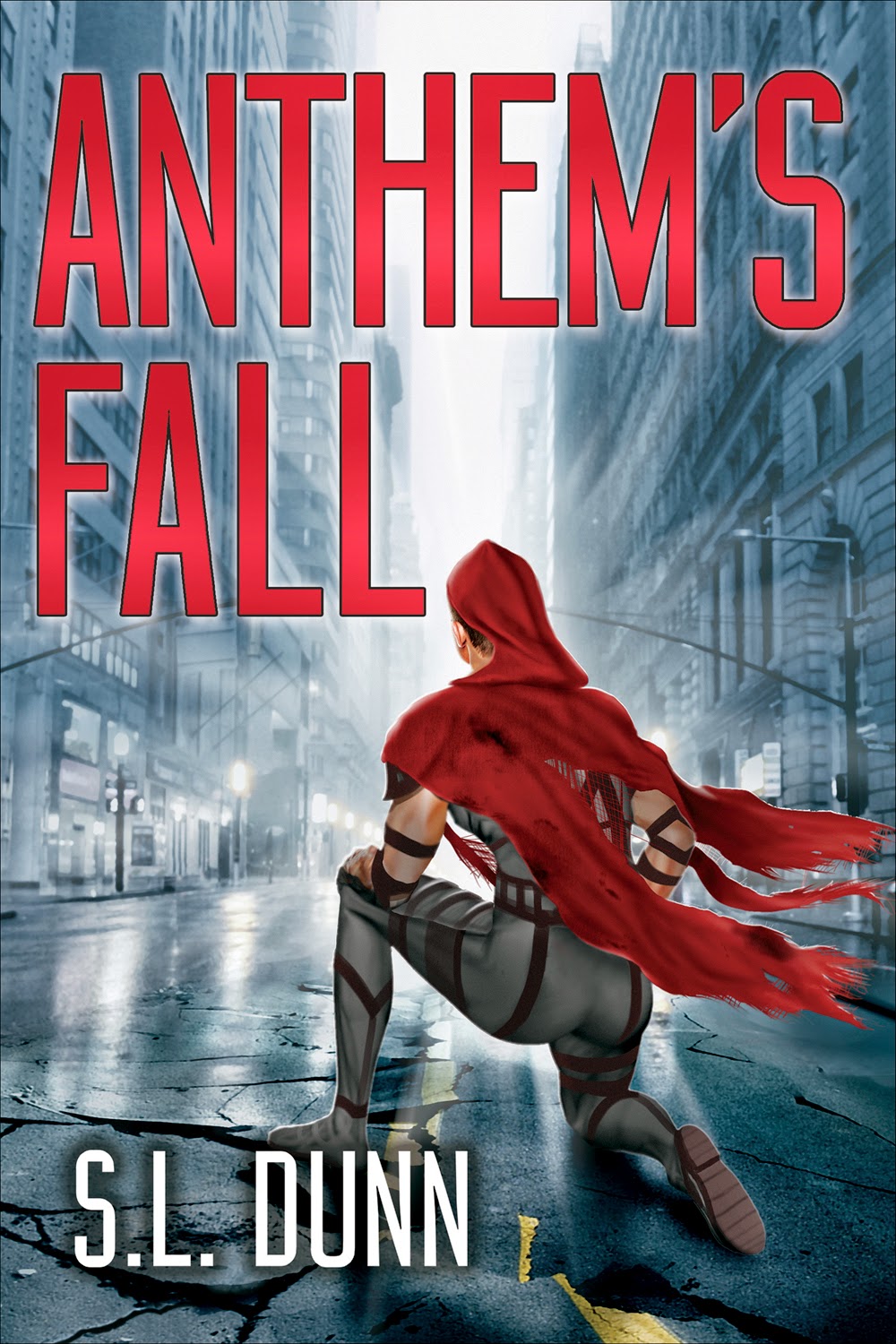 Above a horrified New York City, genetics and ethics collide as the fallen emperor and a banished exile of the same herculean race ignite into battle over the city’s rooftops. In the streets below, a brilliant young scientist has discovered a technology that can defeat them both, yet might be more terrible than either.

Set both in modern New York City and in the technologically sophisticated yet politically savage world of Anthem, Anthem’s Fall unfurls into a plot where larger than life characters born with the prowess of gods are pitted against the shrewd brilliance of a familiar and unlikely heroine.

“Yes, Lord Vengelis!” the boy called, but suddenly froze with fear. The boy began trembling, his chest convulsing in terror. Vengelis slowly turned and looked in all directions. Hysteria was rampant; men, women, and children were running every direction, many horribly wounded. None of them were soldiers. The fire was blazing out of control, and the entire block was immersed in raging flames.

A woman standing nearby, just below a broad tilted awning, remained unscathed. Her appearance contrasted strangely with the mayhem around them. She was thin and average sized, of Royal appearance, with blonde hair and bright blue eyes. Tattered ribbons of the awning and bits of orange cinders and ash blew all about her. She was smiling at Vengelis, her teeth white and perfect. Vengelis was taken aback.

Vengelis squinted through the billowing ash and felt an eerie sense of disquiet surface within him. Her eyes were not quite right. There was a glowing property to her stare, as though her eyes were emitting a strange blue radiance. She was beautiful, but the serene way she was smiling in the midst of the madness was peculiarly horrifying.

“State your name and rank!” Vengelis called out.

The boy stifled a small cry as the woman’s smile broadened. Vengelis glared and turned his attention from her to the boy. In a corner of his mind he already knew he was speaking to one of the Felixes. She moved her unsettling gaze from Vengelis to the boy. The boy let out a terrible sob and released the soldier he had been dragging. The woman took a step closer to the child.

There was no longer any doubt in Vengelis’s mind.

The woman whirled into motion, dashing toward the boy and reaching for his throat. The boy flinched and locked his eyes shut, expecting instant death. But it did not come. He peered through his trembling eyelids after a moment passed. The woman was still reaching for his throat, though now just in front of him. Vengelis had closed the distance and grabbed her wrist with his left hand, stopping the strike in its tracks. Her fingernails were reaching out longingly, inches from the boy’s neck. The woman turned to Vengelis, her expression vacant.

“Huge . . . mistake,” Vengelis growled through gritted teeth, his knuckles white from the vice grip on her wrist. “Get out of here, kid.”

S.L. Dunn is the debut author of Anthem’s Fall, a novel he wrote amid the wanderings of his mid twenties. He has written while living intermittently in St. John USVI, Boston, Maine and Seattle. Raised on big screen superheroes and pop science fiction, he sought to create a novel that bridged a near-sci-fi thriller with a grand new fantasy. He currently resides in Seattle with his girlfriend Liz and their dog Lucy, and is hard at work completing the next book of the Anthem’s Fall series. Get in touch at www.sldunn.com.

Follow the other tour stops to increase your chances of winning the $50 gift card.