Remember on Star Trek when anything you wanted would suddenly appear in the microwave like thingy.

Well, dish the microwave and go for a giant printer and the future is here.

One of the first things printed was a gun. Naturally, I want to talk about better uses.

Recently both a house and a car have been printed...well mostly printed.

The car is very cute. Not everything was printed. They used a standard unprinted battery, suspension system, wheels, and other mechanical devices. So in the end the car body/frame & exterior is printed, and a lot of guts are still purchased and assembled. 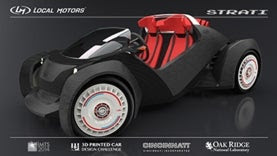 This car would be perfect for Nederlands where the roads are terribly narrow. Except they would definitely need a roof. (It rains a lot there.)

Still, I wouldn't mind having one for the NJ roads. It wouldn't be good for rainy days, but I never drive if its raining. When I do drive, it's mostly to go hiking and that means back country roads on a sunny day.

And even on those few occasions I get on the deady NJ main roads with 4 million other drivers, surely, no one would hit such an adorable cutie.
Except, I might get a ticket. It may not qualify to get upon a major highway, since it does not pass all the safety requirements and it's maximum speed is 40 mph. Also I'll distract the other drivers with my tiny hot wheels.

It's considered to be a neighborhood vehicle, where you drive less than 50 miles to your destination (since the battery will only take you 100 miles and you will want to come home, without your car being towed.)

This only took about 44 hours to make.  I'd be willing to wait 2 days for my car to print.  Local Motors plans to get it down to 10 hours, the same as major manufacturers who assemble rather than print.

Hopefully, they will be able to get the price down as well, since initial pricing will be from $18K to $30K.


Go here for video and pictures

And while you are being supercool & advanced, print yourself a new home as well!

This is the part of the future that I love. Not all the bad stuff, but the stuff that makes me proud to be human!