Today I’m interviewing a very special person – Tompa Lee, the protagonist of The Triumph of Tompa Lee by Ed Hoornaert, the final volume of The Trilogy of Tompa Lee.

Liza: Welcome, Tompa, and thanks in advance for responding to my questions.

Tompa: You're welcome in advance then.

Liza: Can you tell us a little about yourself?

Tompa: Why do you want to know? Is this a maggoty damned trick? If it is, I—

(Ahem. Sorry for this interruption. My author, the guy who writes me, just told me to cool it with the attitude and answer politely. If I don’t, he’ll invent even more disasters for me. But I warn you in advance, ‘polite’ is a foreign language I don’t speak well.)

Thank you so very, very, very much for asking, kindest, gentlest sirs and madams and alien sentients. My name is Tompa Lee, and I’m a ravishingly gorgeous twenty-four-year-old seductress who—

(Ahem. My author again. He says to answer truthfully, as well as politely, and without sarcasm. The man is never satisfied.)

Truthfully? I’m okay-looking, if you like short, flat-chested orphans with great survival instincts. I escaped the worst ghetto on Earth by diligence, hard work, and larceny—mostly larceny—and clawed my way into Earth’s Space Navy. When I got to planet Zee Shode, the intelligent natives first tried to kill me, then proclaimed me a goddess. Stupid of them, right?
But one of the natives, an old, working-class guy named Awmit, became my friend.
I never had a friend before.
Never.

Liza: I can't imagine why not. What is your role in the story?

Tompa: I’m the title character, so obviously I’m the heroine. Let me clue you in on something: you do NOT want to be the title character of a science fiction adventure novel. Problems, problems, endless, life-threatening problems.

The bit about becoming a goddess happened in another book—I’ve endured three novels’ worth of disasters—but since each book is a separate disaster adventure, you can start with the latest. That’s The Triumph of Tompa Lee. I adore the title but abhor the problems I’m expected to triumph over.

Liza: Now that I understand. What is your favorite hobby?

Tompa: You’re kidding me, right?
I know the word hobby, of course. I’m very smart, even though my schooling ended when the orphanage was destroyed when I was twelve. Someone like you probably sneers at someone like me, self-educated and without a degree. Well, screw you with a cactus, Jack.
Hobbies are the stuff that gordos (rich fat cats) do to keep themselves from getting bored. Told you I knew the word. Thing is, I’ve never had the luxury of spare time.
I guess you could say my hobby is staying alive.

Liza: Other than staying in live, what is the challenge you’re trying to overcome during the story?

Tompa: Because I’m a so-called goddess (hah!) the most powerful organization in the Galaxy is determined to squash me. Yep, the Galactic Trading Council. They think I’m getting uppity and threatening their monopolies.

The book opens when an alien from the Council projects himself into my bedroom—while I’m getting dressed, the pervert!—and orders me to commit ‘honorable’ suicide. After I refuse—of course I refuse!—they hire a bounty hunter who kidnaps Awmit and Ming. (Ming is a brave, handsome, talented Space Navy undercover agent who wants to marry me. Him I don’t refuse.)

So now I have to search the ruins of an alien city, alone, and rescue Awmit and Ming before the bounty hunter kills them. Or me.
I told you—problems, problems.

Liza: Don't envy you. If you could make one wish, what would it be?

Tompa: Peace and quiet on a cute little terraformed moon I’ve been told about. And no more cockroachy disasters and sequels!


Liza: Yeah, I wouldn't count on that happening. There may be no ends to your sequels. Now let's find out about the book. 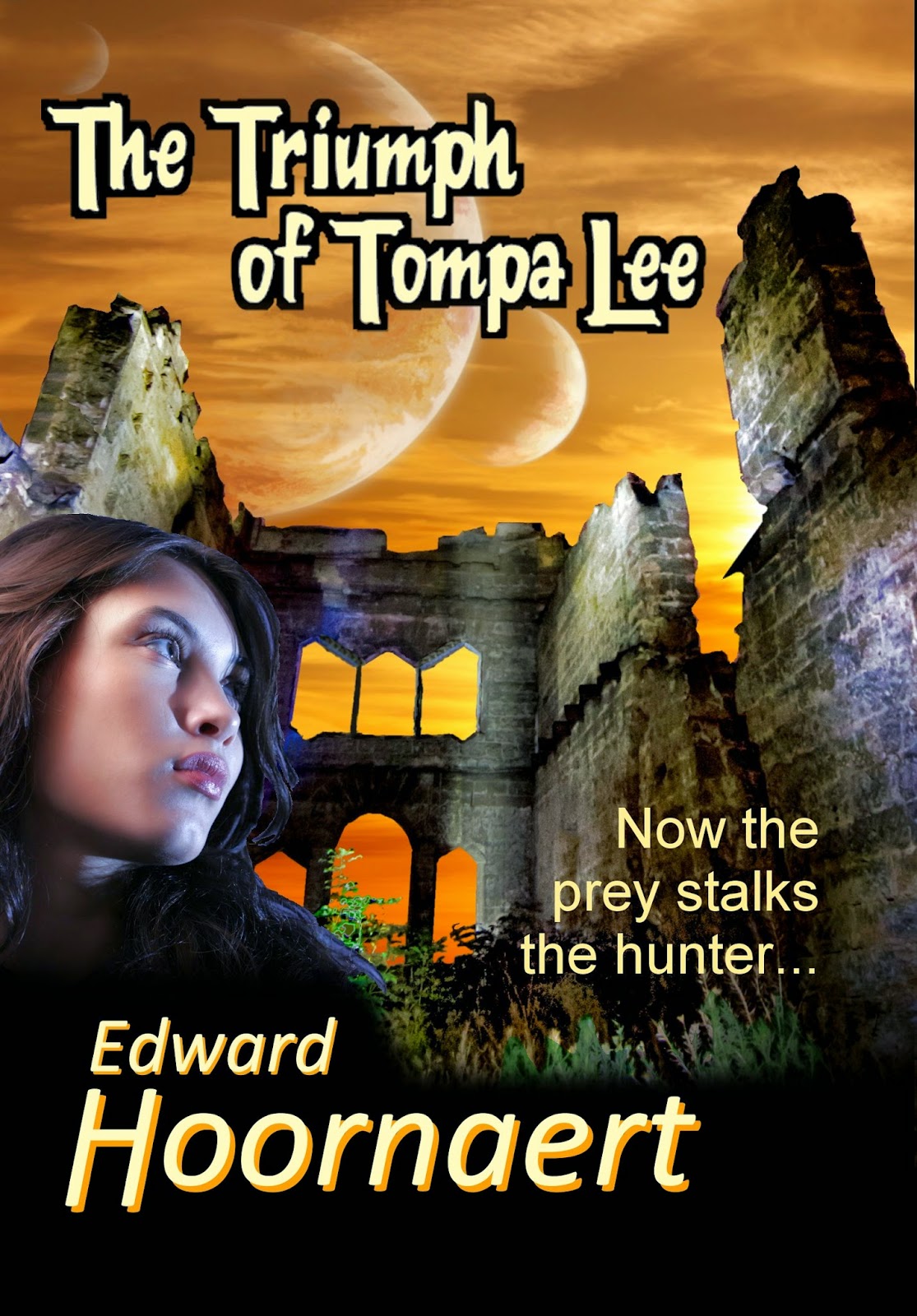 Tompa Lee—orphan, anti-social loner, and homeless street meat—has clawed her way up to the stars. There, on planet Zee Shode, she finds the galaxy’s greatest treasures: friendship and love.

Happily ever after? Not if the Galactic Trading Council has its way. The Council rules by divide and conquer, and Tompa commits the unforgivable crime of forging an alliance between humans, Shons, and Klicks.

The Council hires Lily Kilsing, earth’s most feared bounty hunter, to deal with her. Kilsing lures Tompa to a deserted alien city by kidnapping her fiancé and her best friend.

Aided only by the voices of dead people, can Tompa outsmart the huntress, or will she be forced to sacrifice her own life to save her loved ones—and the future of the Shon race?