Space Rep: I think you are saying that wrong. I'm pretty sure the book is called Return to Emerald City and we aren't going anywhere.

Space Rep: Okay, we can return to Emerald city if you want. Is that where I'll find the prize?

Liza: Or you can enter her Rafflecopter for the $10 Amazon Gift Card.

Space Rep: I'll do that.

Liza: Thank you. Now let's check out the novellas. 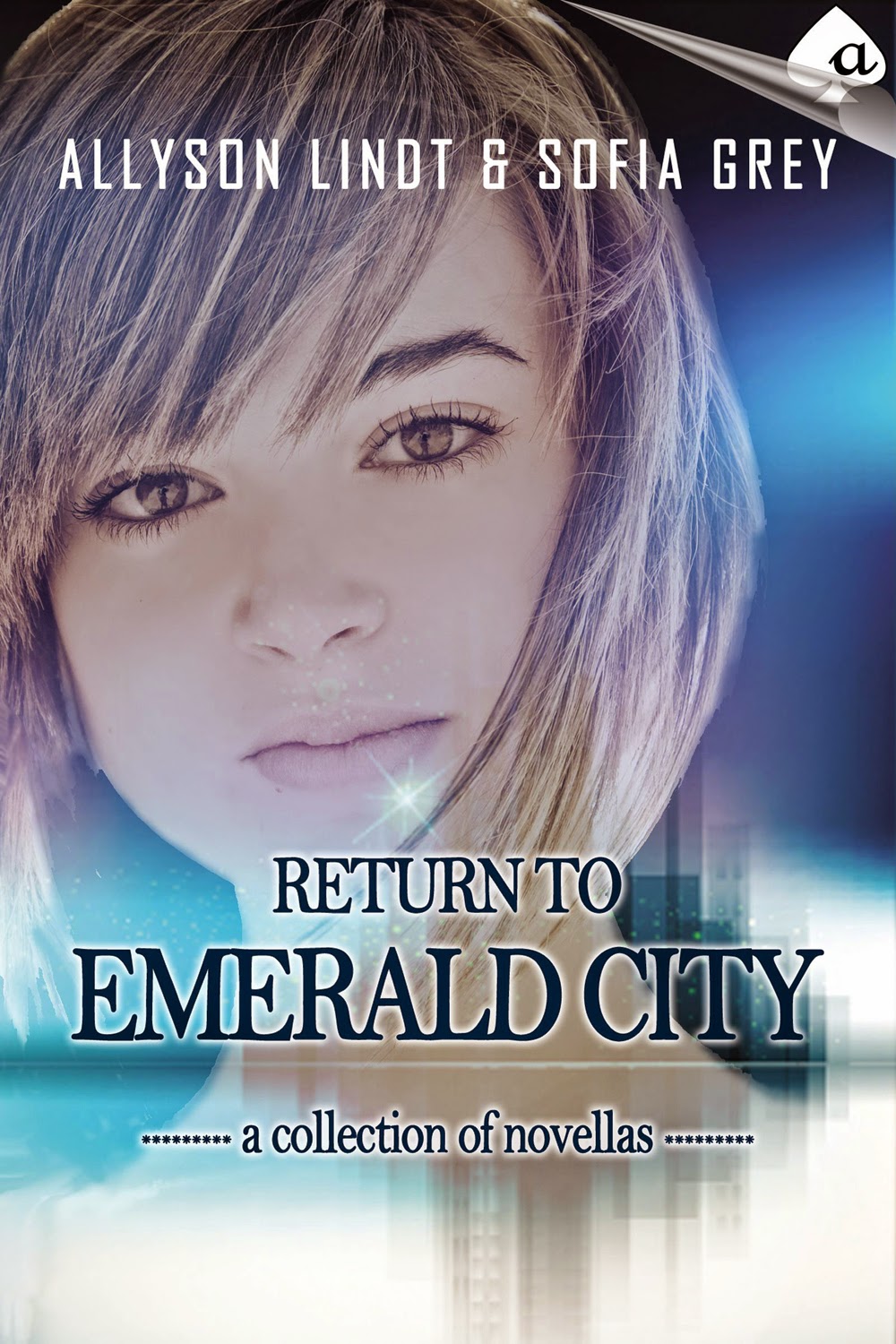 There’s no place like home… Dorothy is already feeling homesick for Emerald City, and wonders if taking a job halfway around the world was a mistake. When her love life crumbles–again–will she run for home?

If he only had the nerve… Ten years ago, Quinn made the best choice of his life, and the biggest mistake. It’s true, his band, Lionheart, is one of the biggest in the world, but how much does it mean if he can’t tell the woman he loves how he feels?

If only he had a brain… Scott woke up with his head spinning and not much else going on up there. Now he’s a suspect in a terrorist plot, and on the run. One woman insists she's the key to his past and his freedom. Too bad he doesn't remember her.

If he only had a heart.... Cam is as much machine as man. There are days he loathes the CyGes implants that saved his life but couldn't do the same for his family. They replaced his limbs, but now he needs someone to mend his heart.

I craned my neck to see the driver, but he was obscured behind a partition. I looked instead at Adele. Really looked at her. My girlfriend? Why didn’t I know her? Her blonde hair was tied back in a loose ponytail. Long strands drifted onto her face, and I reached up to touch them. The softness of the cut reminded me of something—or someone. A different girl with blonde hair falling onto her forehead. Like a kaleidoscope, the image in my head shattered and faded to black.

“What’s going on?” Feeling helpless and out of control was alien to me; I knew that instinctively. I was used to being in charge.

She sighed, and then took my hand. “The police were coming to arrest you.” Her gaze skittered away and focused on her shoes.

“They think you’re a terrorist.”

“What?” I’d never heard anything so ludicrous. Or had I? My head thumped again, when the Mag-Car took a corner at speed, and I struggled to speak clearly. “Why would they think that?”

“You were seen setting a bomb on the Mag-Line.”

Two authors join forces to bring the Wizard of Oz tales into the future. Four stories, two from each author. There are certain features, such as the mag-line and Emerald City that remain consistent within all stories. Some characters show up in the other stories.

Also, if you look carefully, there is a Dorothy, a modern lion, a scarecrow, and a tin man. Otherwise, it’s just four well written futuristic romance stories about people with issues that need to be solved and are, but not always in the manner you expect.

While the stories are cohesive there are differences in the writing styles, which, for me, made it hard to jump from one author to the other back to the first. I would have preferred to read both of Sofia Grey’s, then Allyson Lyndt’s or the reverse. However, I could not tell you which author I preferred, so just be glad they are both excellent authors and enjoy the ride.

Romance author Sofia Grey spends her days managing projects in the corporate world and her nights hanging out with wolf shifters and alpha males. She devours pretty much anything in the fiction line, but she prefers her romances to be hot, and her heroes to have hidden depths. When writing, she enjoys peeling back the layers to expose her characters’ flaws and always makes them work hard for their happy endings.

Allyson Lindt is a full-time geek and a fuller-time contemporary romance author. She prefers that her geeky heroes come with the alpha expansion pack and adores a heroine who can hold her own in a boardroom. She loves a sexy happily-ever-after and helping deserving cubicle dwellers find their futures together.

For more chances to win the giftcard, visit the other sites