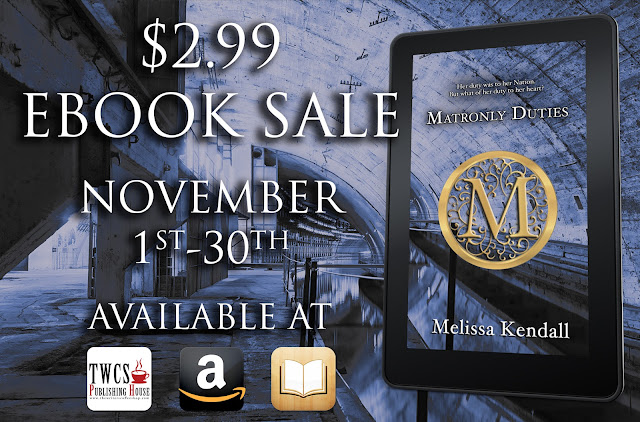 Today, we have the very talented Melissa Kendall and her remarkable novel, Matronly Duties.

EBook available from: Amazon and ITunes 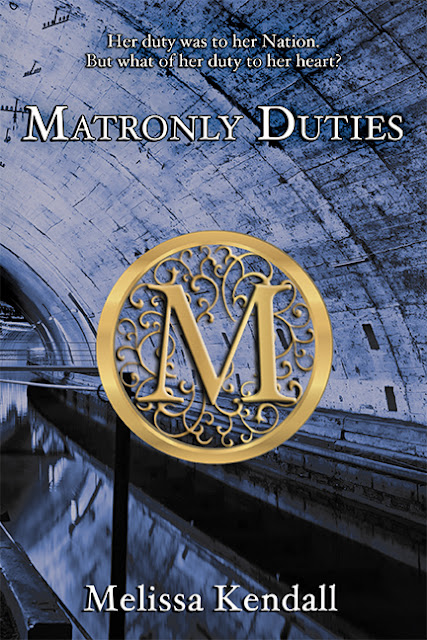 Hundreds of years after an asteroid slammed into Earth and sent it into a new ice age, what remains of the human race lives on in underground sanctuaries. Now, as the bicentennial anniversary of the impact approaches, a new leader prepares to take her place at the head of the government. At least, that’s what she thinks.

Bethanie Greene’s life has been planned out for her since the age of thirteen. Beautiful and intelligent, she’s spent the last twelve years training to become the next Matron of the underground nation of Oceania. But when Bethanie is kidnapped by rogue extremists just six weeks shy of taking office, her world is turned upside down by the handsome stranger who rescues her.

Howard James’ life has been the polar opposite of Bethanie’s. Struggling to survive in a world where those in power wished he didn’t exist, he harbors a deep-seated resentment of the government and all its representatives. Together with his unconventional family, he shows Bethanie a life she never knew was possible, while at the same time, opening her eyes to the injustices of the government she is meant to lead.

But can she trust a stranger? And can a few days change everything she believes and desires? Against all odds, Bethanie must decide if her heart and her duties can coexist.

A yawn creeps up my throat and I suddenly feel like I haven’t slept in weeks. The temptation to curl up and go to sleep is strong, but my body is telling me I need a trip to the bathroom first.

I head down the hall to the door at the end. It’s ajar, so I push the door open—and freeze. The bathroom is not empty.

Howard stands at the sink, naked from the waist up, cleaning his teeth. Without clothing, his shoulders look twice as wide as before and every curve and dip in his muscles is clearly visible. Down the middle of his back is what looks like a big, black T. I have this crazy inclination to trace it to see how it feels.

Howard clears his throat and my gaze shoots up to find him watching me in the mirror. “Do you mind?”

He winks at me.

“Sorry.” I pull the door shut. I’m mortified to have been caught staring. I also have butterflies in my stomach again, stronger than ever, and my heart is pounding. I fan my face with my hands in an attempt to calm myself down.

Before I can get everything under control, the door opens and a still-shirtless Howard walks out.

I mentally slap myself for such an inept reply, but the view of him from the front is even better than the back. He has one of those washboard stomachs I’ve heard Gail talk about. I never understood what she meant, but now I can see how apt the description is. Once again, I find myself unable to stop staring.

“Howard? What’s the T on your back?” I ask, curiosity getting the better of me.

He stops and half turns towards me. “It’s a tattoo, and it isn’t a T, it’s a crucifix.”

“Yeah, it’s the cross Christ was nailed to. It is a symbol of the weight I bare in the name of justice.”

“Thanks,” he says, “but I better get to bed if I’m going to be up early to take you to the post office.”

“Sweet dreams,” he calls back.
I smile. They might just be.

EBook available from: Amazon and ITunes

Melissa Kendall is an almost forty-year-old mother of two from Perth, Western Australia, the second-most isolated capital city in the world. Predominantly a stay-at-home mum, she works a few hours a week as a software support consultant. She has always loved to read and write, and spent most of her teens writing poetry and short stories. Over the years, daily life got in the way and she lost the passion for it, but after the birth of her first child, Melissa discovered e-books and her interest in writing rekindled. She is now the author of two published short stories. Matronly Duties is her first full-length novel.

~~CONNECT WITH THE AUTHOR~~