Back in 1954, I am most fortunate to have a hunky alien over. I know my verb tense is a bit confusing, but this alien arrived on earth in 1954, so when you entered my blog today, Melisse transported you back to 1954. And if you decide to remain in the past, I highly recommend you buy some Berkshire Hathaway stock 1955. You won't regret it.

For those who don't wish to hang about an entire year working some odd job to be able to buy stock and eventually become a billionaire (wealth is over-rated) then we'll try something more rewarding:

An ebook of Alien Invasion will be given to one lucky commentor who leaves their email address.

AND THE WINNER IS: VANESSA N. CONGRATS!

Yeah! That's much better! Let me ungag Melisse and let her tell you a bit about how this strange book came to be.

I started reading sci-fi in the sixties, because I was a precocious reader with a generous teenaged brother. He had(still has) a huge paperback library of classic sci-fi. Heinlein and Murray Leinster, Poul Anderson, Andre Norton...and many of those pulpy two short novel per paperback book. Books about planets with giant insects, strange, telepathic children, advanced alien portals stumbled on by ordinary folk. Exciting adventures.

Hubby and I have watched many old sci-fi movies, too.

So I had this idea to write a story set in the fifties, with a non-kick ass heroine. Someone a little like my very ladylike well dressed mother, with hair just so and a handbag that matched her pumps. So Debbie Sue was born.

I live in a city in Wyoming bordered by a huge hogback mountain to the south. The vision of a silver space ship coming over the mountain was inspiring, too. I set this book in the city of Casper(my home) in 1954, and the areas surrounding it. Since I normally write space opera in the distant future, this was pretty fun. I did quite a bit of research on cars and office equipment of the fifties! 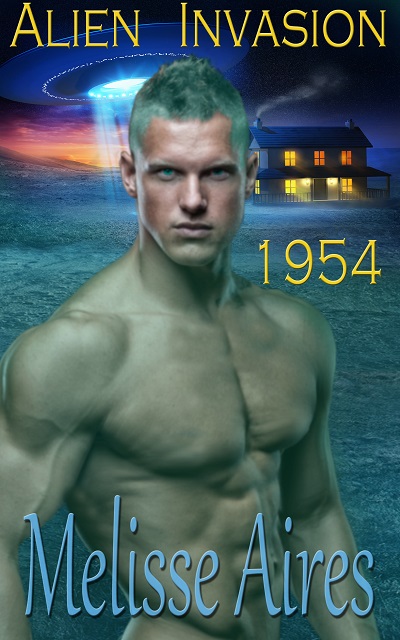 The next evening when Akarak came for supper she noticed he had a slight limp.
“Did you hurt your foot?”
“Akarak drop heavy tool.”
“Ouch.” There was no ice. “The stream is cold, maybe you should soak your foot.”
“Debbie Sue and Bobbee come to ssstream?”
“Sure, it will be fun.”
It was fun. Bobby didn’t care for the cold water but there was a small sandy bank and he discovered digging with a rock. She sat next to him and watched as Akarak soaked his foot in the cold water. The sun was low in the west and when he turned the scales, more prominent on his back, glittered.
“Akakak pitty.” Bobby made baby grabby hands at Akarak’s scales.
Akarak looked at Bobby. “He learn sspeach.”
“Yes. He thinks your scales are pretty. They shine in the sun.”
“Baby learn much?”
“He will but he will be a child for many years, with many things to learn.”
“Children alone in Denverrr. Vinshal take food. Need big ooman.”
“You know where some children are?”
“Yass.”
“Maybe we can find people in town, help them.”
“Yass. People fear Vinshal.”
“They do.”
“Does Debbie Sue fear Vinshal? Fear Akarak?”
“No. I don’t fear you.”
The sky was darker now and a chill was coming on. “I’d better get Bobby ready for bed.”
They walked to the house, the dogs running around, Bobby slumped over her shoulder, half asleep. Debbie Sue made a decision.
“Bobby will fall asleep as soon as he hits the bed. He won't wake. If- if you'd like you can stay downstairs while I put him to bed, then I will bring you up to a bedroom.” Her mouth was dry as she spoke. “We could start, er, an affair.”
“Affairrr?”
Of course he wouldn’t know that word. “Sex,” she blurted out.

Don't forget to leave a comment and email address if you want to be in the drawing for a free Alien Invasion.
Posted by Liza O'Connor at 12:00 AM