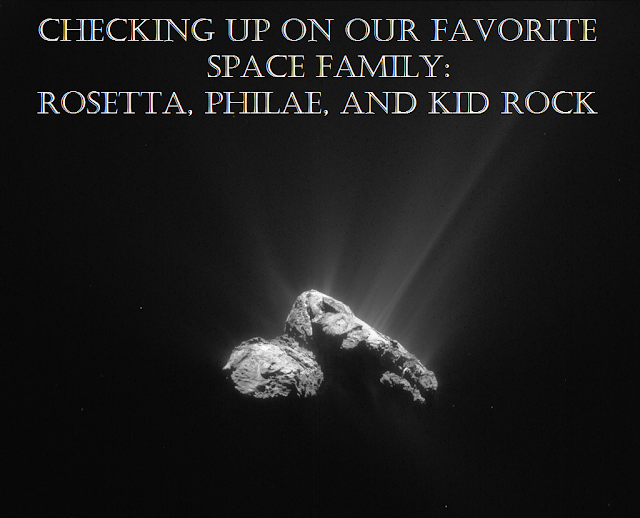 Today, I'm talking about my favorite robots and the BIG Kid Rock: 67P/Churyumov–Gerasimenko. 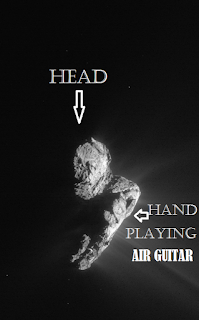 As you recall, Rosetta and Kid Rock had a baby robot called Philae. According to Kid Rock, the baby looked nothing like him and he moved on. (Asteroids tend to do that. I've no idea why Rosetta thought he'd stick.)

Instead of realizing her mistake and finding a nice scientist to settle down with, Rosetta grabs Philae and runs off after Kid Rock. It took her forever to track him down, but she did. She then sends her son, Philae down to Kid Rock and tells him she's tired and he needs to care for Philae. 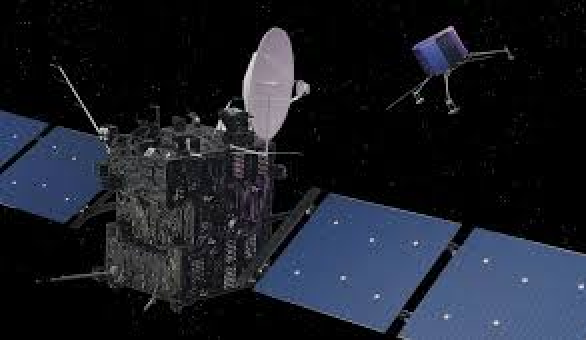 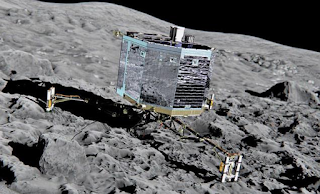 You know this had to be traumatic for Philae. First, his dad wants nothing to do with him and runs off. Then his mom grabs Philae and chases after him. Then just dumps him on the rock. Nor does Kid Rock want him, which Philae discovered when he attempted to attach himself to the surface. "NO WAY! You aren't mine and you don't look a thing like me!"  He then shouted at Rosetta hanging above them filming it all. "You can ask for alimony 'til your gold turns to lead, but I'm  not giving you anything!"

Needless to say, Philae goes wandering off to cry in a dark dip, not realizing until it was too late, that the shade was not his friend. 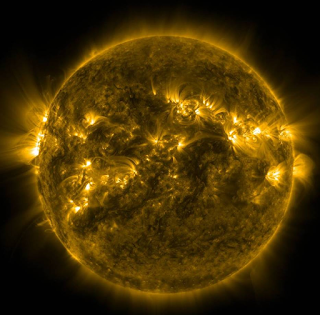 When Kid Rock moved closer to the Sun, Philae woke from his long sleep and called back to the humans on Earth. We were all so happy to hear from him. I even cried with happiness that against all odds, he was back. But not one earth person offered to fly out and rescue him, so soon he grew despondant and went silent again. He was tired of giving out data but never getting any in return.

And what was Rosetta doing all this time? Sniffing about Kid Rock, try to determine what he's made of. Seriously, Rosetta, you should have inquired about his composition when you first met him. Not after you've had baby Philae, chased your rock star down, and dumped the poor Philae in his lap. Kid Rock was getting ready to go on his Round the Sun tour. Tours are the life blood of rock bands! You know that!

But like gum on a shoe, Kid Rock cannot get rid of Rosetta...or Philae for that matter.  If he even tried to invite some pretty rockett over to his space after a concert, Rosetta would be all over her in seconds, reporting everything back to Earth.  The paparazzis would have a field day!

So what is to become of our dysfunctional space family? Well, the Earthlings have decided they are going to get the family back together. Sounds sweet. We all love a happy ending....

The earthlings have given Rosetta permission to CRASH into Kid Rock. During her descent she will measure and send back everything she can about the jerk. While she didn't know a great deal  when they made Philae, she does now. For example, he has a great deal of sweet smelling oxygen around him. The question she wants to know is: does his composition make him smell so sweet or is it the scent from some hussy rock that rubbed up against him some time before Rosetta caught up with her rock star.

While the humans want her to CRASH softly, don't count on it.  Like any female who has been abandoned and ignored, she's going to end matters with a vengence. 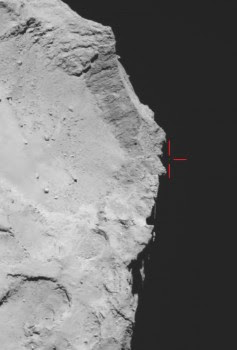 And what about Philae? Most earthings think he is truly dead now. The red marker shows where they think he is. But he's not talking.

And here is a close up:

Poor Philae probably starved to death from a lack of nurturing from either of his parents. Seriously, some robots and rocks shouldn't be allowed to care for a field mouse. 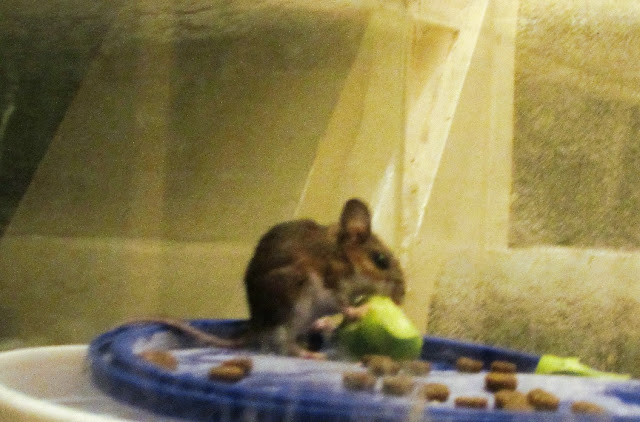 Thanks for reading all the way to the bottom. For more humorous science, try my Multiverse series.