Specters in the Storm by Pauline Baird Jones

Specters, Automatons & Evil, oh my!
Today we have Pauline Baird Jones over with her very, very strange Novella.
Specters in the Storm was supposed to be a completely different book. But Life Happens. Opportunity knocks. I opened the door and let it in. It was a good decision, though I wasn’t sure at first. I like what resulted much better than the novel I had planned (a novel that kept getting pushed down my production schedule, btw.)
Strange things happen when I unleash my imagination and jettison all previous expectations; when I leap into the fictional void and take a risk with a new-to-me genre. Of course, that’s also when I have the most fun as a writer. This little novella surprised me on many levels.
I had to get a bit, um, bloody with the original idea, however.
What/who survived mostly intact? Two characters. Ernest and Lord Henry. And automatons, airships, and the Great Storm of 1900 (though it is actually part of the back story in this version).
Ernest, oh that Ernest. He didn’t want to change and hasn’t since I first “met” him on the page, so I was a bit worried how he’d feel about the plot changes. And yet…he had possibilities in both drafts. He was capable of growth or I’d have had to kick him to the curb. I’ve learned to be ruthless with my characters. I let them push me around IF they will attempt to change and grow through the story. Otherwise, off with their fictional heads! (Yes, I’m a mix of kindly patron and the Red Queen.)
Lord Henry? He started creepy and stayed creepy. Dude gave me nightmares. Thankfully I didn’t need him to change.
Prudence’s name stayed the same, but who she was and where she came from changed completely. She got shifted from living in the early 1900’s (a setting that clearly chaffed her independence), into a multi-dimensional time traveler from the 50’s.
The setting had to change but it showed no signs of minding. I thought I might mind, but for a novella, I needed a single location. I will say, I enjoyed drilling down to a single location because I finally got to use my love and fascination with lighthouses.
I had no idea how many really cool lighthouses there are all over the world. So browsing them and figuring out which one would best serve my story was almost as fun as writing the novella. (I’m still struggling with an overwhelming desire to tour them all.)
I also got to indulge in my love of time travel, though the inter-dimensional time travel was a first for me. I usually try to avoid it because my single dimension time travel plots almost make my head explode. (Head didn’t explode this time but it was a near thing.)
And there are the ghosts, my specters of the title. I’ve dabbled in ghosts, but haven’t ever ventured into the fringes of a horror story. And there’s a dragon, but because this is me writing this, it a dragon with a twist. And I added an octopus. It was a bit like making soup. I kind of threw him in, but then I really fell for Octavius. We all need an Octavius in our lives.
An Amazon reviewer (from when it was in a boxed set) called it an “awesome paranormal detective story.” I loved that, but Specters also has elements of science fiction and there’s a romance, too.
Am I crazy to mix so many genres into my quirky little novella?
Probably.
But that’s how I roll.
How do you “roll” in your reading and/or writing? Do you like to mix it up or focus, focus, focus?
Liza replies: I like to surprise myself.

So let's find out more about the book. It sounds very good!: 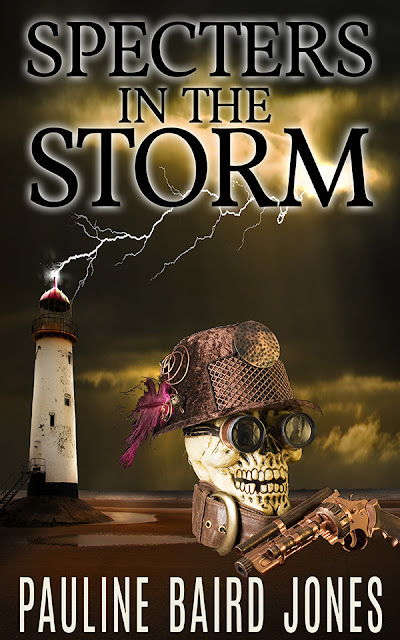 Spectors in the Storm
by
Pauline Baird Jones

Specters, Automatons & Evil, oh my!
Dr. Ernest Warren is done with love. Losing his wife in the Great Storm of 1901 left him with questions only science and interstellar travel can answer. When disturbing storms begin to brew again, he to reluctantly turns his airship back to where he lost his love in hopes of finding answers.
Prudence Pinkerton has been following Ernest's multi-dimensional career from the future and knows she has to meet him.
When he reluctantly accepts her help, Prudence doesn't waste time. She knows time is running out and the world is on the cusp of life-altering change.
Prudence must overcome his distrust of her if they are to save Earth from the evil hiding in the heart of the storm.

Pauline Baird Jones’ is known for writing  smart, quirky, funny fiction. Check out her venture into a time-bending paranormal detective story with Specters in the Storm.

One link to all vendors: http://www.paulinebjones.com/BlogWP/book/specters-in-the-storm

Bio: Pauline never liked reality, so she writes books. Seventeen of them, actually. She likes to wander among the genres, rampaging like Godzilla, because she does love peril mixed in her romance. You can find out more about her books (and get free stuff for subscribing to her newsletter) at: paulinebjones.com