I haven't interviewed a book in a really long time.  But I had so many questions with this book that I desperately need to interview it.

Space Rep: If you don't know, Liza is a book whisperer. She can talk to books and yes, 5% of humans regularly talk to their books, but most of them are in psych-wards, so don't worry. The big difference with Liza is that books can understand her, even if someone has removed most of their head from the cover. It will NOT silence the book. They still can talk to Liza. 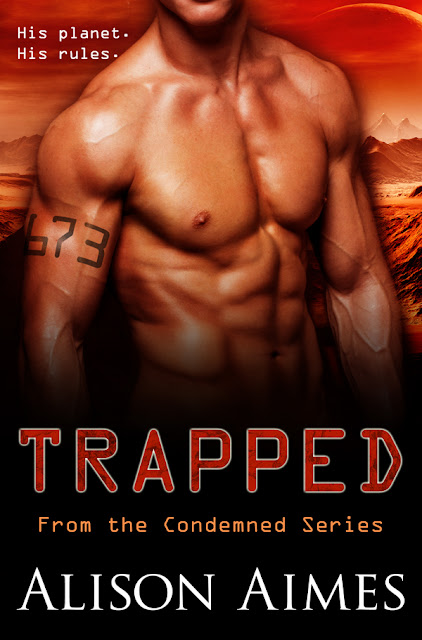 Title: Trapped
Author: Alison Aimes
Genre: Sci-Fi Romance
Release Date: March 1st 2016
HIS PLANET. HIS RULES… Trapped by Alison Aimes is an action-packed, smoldering sci-fi romance that takes you to the brink of oblivion on a planet where only the strong survive….When Bella West crash lands on prison planet Dragath25, the only thing standing between her and a mass of brutal criminals is one of their own, a ruthless loner known only as 673. But what starts out as a desperate trade based on protection and raw lust soon blossoms into a scorching need that will push them both to the edge.

A tale of unbridled desire, stunning sacrifice, and unwavering love, Trapped is the first book in The Condemned Series.  It is available for pre-order now.

LIZA INTERVIEWS TRAPPED.
Liza: First, may I call you Trap?
673: No.
Liza: No? You would rather be called by numbers that were branded on your arm for crimes you didn't commit?
673: No, but I don't like Trap either.
Liza: You're being difficult. I see how you got imprisoned and your face kicked off the cover. In fact, until you behave better, I'm going to talk to Bella.
Cadet, may I call you Bell?
Bella: Why can't you call me Bella?
Space Rep: Liza can't type more than four letters without misspelling something.
Liza: What is wrong with you two? You are clearly on a godawful dangerous planet with some seriously deranged prisoners who actually do deserve to be here and you are fighting me over what I call you?
673: If you'll call her Bella, I'll let you call me whatever you want.
Liza: And they say chivalry is dead. So Bella, tell me why you came to this godawful place.
Bella: I had one and only one objective when I joined the scientific mission to Dragath25, the notorious prison planet housing Earth’s condemned.
Liza: We know this place is danger central, but what was your reason to come here?
Bella: To earn the credits necessary to save my family from starvation.
Liza: Oh...that's really a good reason. How's it going?
Bella: How's it going? My shuttle crashed and most of the crew perished. How do you think it's going?
Liza: If I knew, I wouldn't be asking you, now would I? You two are the most aggravating book people I've ever met.  *Turning back to 673*
Okay Num--that's short for numbers--how did you get dumped here?

673: I was convicted of a crime I didn’t commit.
Space Rep: They all say that.
673: I've been on this forsaken planet for over eight years, fighting every day to survive this deadly planet and its even deadlier inhabitants. One more word out of you, and I'll throw you to the real criminals of this world.
*Space Rep disappears*
Liza: So tell me about yourself, Num.
673: The reason I'm still alive is because I'm smart, strong, and never look out for anyone but myself. I don't try to make friends, because they'll stab you in the back first chance they get.
Liza: But you like Bella...
673: Bella offered me the pleasure of her body in return for protection. Since I haven't had the pleasure of a woman in over eight years, I accepted. But I let her know it would never be anything other than an exchange of services.
Liza: That's very romantic. *rolls eyes*
673: I'm not trying to be romantic. I'm trying to survive! You've no idea how hard that is here.
Liza: And you're claiming you still feel nothing for her?
673: No. I didn't think I would, but her touch has altered me. I want to protect her. Honestly, a part of me believes that saving her may be the key to my own salvation. But caring for someone on Dragath25 may prove the greatest hazard of all.
Liza: Well, this does sound interesting. May I peek beneath your covers?
673: I have Bella. Why would I want you?
Liza: I wasn't speaking euphemistically, I was asking to read an excerpt from your book!
673: Sorry, I've never met a book whisperer before. Yes, go run amuck as you wish...
Excerpt from TRAPPED:

“Fine. Go.” Bella screamed at the spot where he’d been. “I should have known you wouldn’t keep to the deal. You’re nothing but a lowlife Dragath25 criminal. Who needs you?”
She was turning back toward the cave when the ground shook. Reeling round, her eyes went wide. Convict was steamrolling toward her, a murderous look on his face.
She’d only just begun to run when powerful arms jerked her back against hard, warm steel. Clawing, kicking, she tried to break free, but it was no use. Caged by one thick arm around her stomach and one tangled in her hair, she was trapped.
“That’s right, fighter-girl. I am nothing but a lowlife Dragath25 criminal.”
“Stop.” She shoved against his chest. It was as unmovable as the rock at her back.
“Criminals don’t stop.” He fisted her shirt, drawing her onto her tiptoes, bringing her face in line with his. His knee slid between her thighs, forcing them wide. “We take.” His hand skimmed down her body. “We violate.”
Heartbeat slamming against her ribs, she tried to fix this. “I—I shouldn’t have said what I did. I’m sorry.”
“That’s right. You shouldn’t have said it.” He wrapped his wrist tighter in her hair. “Just like you shouldn’t have ignored my direct order.”
“I understand that now.”
It was as if he didn’t hear her. “You think it’s easy to survive out here. You think this is a joke. You think I made it on this fucking hellhole this long out of sheer luck.”
“No.”
“I’ve seen things you wouldn’t believe. Done things I can barely stand to think of.” Echoes of those horrors stretched tight across his face. “But I’ve made it here eight years and I don’t intend to die now.”
Her chest grew tight. She didn’t think she could bear even another few days on this place. She couldn’t imagine surviving eight years.
“I’m sorry. You’re right.” She spoke fast, the words spilling from her, more genuine this time. “I wasn’t trying to get you killed. I was trying to help. I appreciate all you’ve done. Hiding us in the cave. Saving us from the tigos. Even the water and bandages you gave my colleagues.” She cleared her throat. “You were keeping to the deal. I was the one who screwed up.”
He didn’t acknowledge her words, but his grip loosened, the tension in his body lessening. “It’s easy to die out here.”
“But people make it.” Her voice shook. “You’ve made it. I will too.”
He shook his head, something that looked a lot like regret in his gaze. “You’re soft. Delicate.” The finger that had been so predatory against her skin now felt like a caress. “Keeping you alive will be next to impossible. Even without the added stubbornness.”
A new and astonishing idea flooded through her, a live wire of awareness to her brain. It wasn’t cold-heartedness that had promoted his departure, but the exact opposite. He didn’t want to watch her die.

***
Liza: I know this looks bad, but the book swears there is an HEA at the end. So it's safe to buy the book: 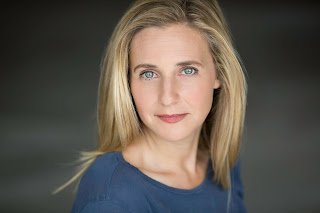 Alison Aimes is the award-winning author of the sexy sci fi Condemned series and the contemporary romance Billionaire's Revenge series.

A PhD graduate in Modern History, she's always had a love for dramatic stories and great books. Now, she's moving across eras to create sexy stories full of intrigue, action, and passion, but always with a happy ending.

She lives in Maryland with her husband, two kids, and her dog. When not in front of the computer, she can be found hanging with family and friends, hiking, trying to turn herself into a pretzel through yoga, listening to TED talks about pretty much anything, but especially space, or, last but not least, sitting on her couch imagining her characters' next great adventures.