Liza: Space Rep has been practicing his interrogation and interview techniques and wants another go at Major MacKenzie. How could I say no? It's been a year since the first interview with Vista Security's Maj. MacKenzie (see it here), so an update is in order.

SPACE REP: A lot has happened recently. Are you happy with the progress you've made, in The Vista and Cody?
Mac: Of course. It's been a long time, a lifetime for some of us. Getting out into the world has its drawbacks, but overall, it's going to be a good for us. The Vista was isolated for twenty years. The rest of the world went on. Now we're catching up.

SPACE REP: It seems that Team Three has broken up. True?
Mac: Not at all. We have jobs that have been assigned to us, and right now, that means we're in different places. I'm here in Cody, Shannon is out in Colorado, Wade is somewhere I can't disclose. Team Three is still Team Three, and in time, we'll be back together.

SPACE REP: What has surprised you the most about the new places you've been?
Mac: Nothing.

SPACE REP: Nothing has surprised you, in the past year?
Mac: All right, here's one. I was surprised at how completely Council and probably Command has lied to us about what's beyond The Vista. We should have known. The thing is, they claim they did it to protect everyone. After the past year, I understand it. I don't condone it.

SPACE REP: What do you expect in the next year?
Mac: We're digging into some of the new places, finding out who we can trust.

SPACE REP: Being an Altered, that has to be easier for you.
Mac: You'd think that, but it's not so simple. Altered humans are not welcome in places, and rumor has it, hunted in others. Now, since there is no outstanding physical evidence to identify us, we can generally keep our mouths shut and get along with everyone.

SPACE REP: Since you're out in the world, making friends and influencing possible allies, what do you expect your biggest obstacle to be?
Mac: Vista Council. They will want answers about what we did in Colorado. Command, too. It could get ugly.

SPACE REP: Now that you're the responsible adult, the person in charge of the Cody Base, how has that changed your perception?
Mac: There's always something broken, not working right, or just plain missing. I don't like being what amounts to an administrator and I don't foresee myself there for any extended amount of time.

SPACE REP: Great. Where is she?
Mac: Like I said, in Colorado.

SPACE REP: With Hunter?
Mac: Both of them are there, on separate assignments. Yes, they happen to be in the same place. No, that doesn't bother me. In the end, I don't want her to be alone. There are a lot of reasons she'd be safer and happier with Hunter, but that doesn't mean I'm out of the picture.

SPACE REP: Anything you'd like to add?
Mac: When we started this little adventure into the world outside The Vista, we were clueless. I still don't think we've done more than scratch the surface. Time will tell. 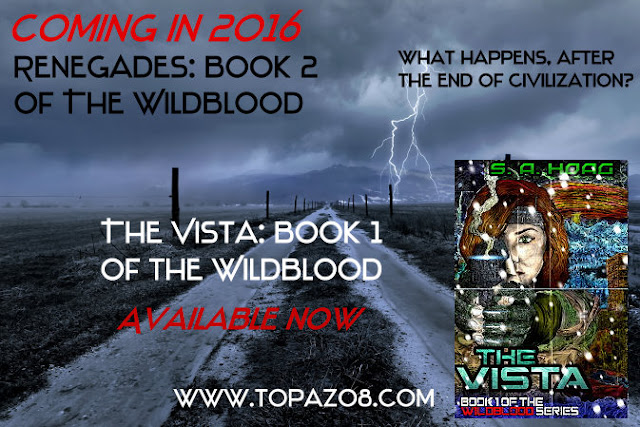 What happens, after the end of civilization?
The Vista:
Book 1 of The Wildblood by S. A. Hoag
AMAZON

New 5 Star review!
The Vista is fast paced with lots of action and suspense and covers a lot of territory in the vastness of post apocalyptic United States. S A Hoag creates characters who are not only believable and enduring but who lead and direct the narrative, carrying us along in their wake. This is dystopian fiction at its best. Looking forward to the sequel.
~ ~ ~ ~ ~
Uncontrollable. Unpredictable. Dangerous. The Wildblood.
Now, Team Three know what they are.
Renegades: Book 2 of The Wildblood - 2016