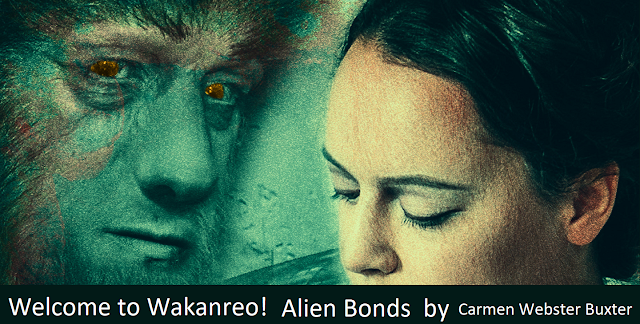 For this story, I wanted to create a culture where there was no dating, no marriage, and no divorce. Instead, people pair off only when two (or rarely more!) people meet and a purely biological reaction happens. This means there’s no choice involved, and no backing out. To do this, I created a world called Wakanreo where the dominant, intelligent species is humanoid but obviously not human.

Because biology is in charge, all Wakanrean cultures don’t equate sexual behavior with morality.  Beautiful people have no real advantage in life, and plastic surgeons have a lot less business.  No one is ever judged on who his or her partner is.

The first book in the Wakanreo trilogy is called Alien Bonds because the human protagonist finds herself tied to the world—and to one particular Wakanrean—in a way she never expected. 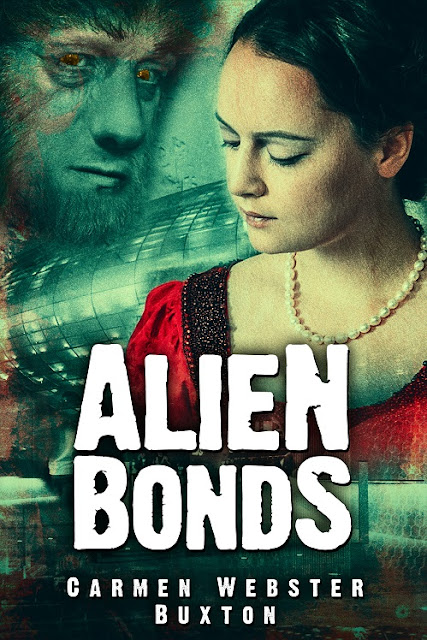 Blurb:
In Alien Bonds, two lives are changed in an instant. Industrial chemist Dina Bellaire travels all the way to the planet Wakanreo to advance her career. Her carefully planned life goes up in flames the second she meets Kuaron Du, a Wakanrean who makes his living singing ancient songs in a dead language. Both of them know they can’t go back to the way they were before they met. They just have to convince the rest of the universe that what happened to them is real.

Available as a Kindle book or a trade paperback.

Excerpt:
For a brief visit to Wakanreo, here’s an excerpt from the beginning of Alien Bonds. Dina, the protagonist, is still very new to the world, and is on a blind date.

“That’s one of her local stars she’s sucking up to,” Erik went on.
“That one is a singer, I think. God, I hope she doesn’t ask him to sing. Wakanrean music sounds like someone torturing small animals.”

“Really?” Was it just her, or was Erik rather wearing?

“I think the two in blue are wrestlers. That’s one thing I’ll give the Wakanreans. Their wrestling is superb entertainment.”

Dina had the satisfaction of seeing her date look dumbfounded. “Jared Harlingen? You know Jared?”

“Only slightly. Actually, I was wondering if he was invited tonight.”

Erik let out a breath of explosive displeasure. “Not bloody likely. The Ambassador can’t stand him.”

“He said that,” Dina said, wondering if she was being indiscreet.
“You seem pretty chummy with Jared.”

It wasn’t said as a question, but Dina detected a speculative note in Erik’s voice. “Is that bad? Is there something wrong with Jared Harlingen?”

“Nothing except he’s always beating my time.” He put down his glass and turned to face her. “Arliana said I should wait until later to ask you, but what the heck—Do you want to go to my place for a more intimate get together? I’ve got better food and booze than the Ambassador is providing, and I’m sure the two of us could have more fun alone.”

Dina felt her face flush red. She hated that she couldn’t control her tendency to blush. Ever since she had left the comfortable familiarity of her native world, she had found herself in such situations. No longer shocked, she still couldn’t stop herself from reacting as a Fantaran.

“I’m sorry.” She fought to keep disapproval out of her voice. “I have to be at work very early tomorrow morning.”

Erik’s eyes opened wide. “Oh, come on! You can’t possibly be offended. Arliana said you were married on Croyzan.”

Her mortification faded, and annoyance replaced it. “I fail to see that my life or my reactions are any business of yours.”

Dina put her glass down on a nearby table. “It seems Arliana miscalculated in thinking we would hit it off. I think I’d better go.”

He blinked. “What century do you all live in back on Fantar? Arliana isn’t a prude about sex. How was I to know you are?”

Annoyance morphed into anger. She was trying not to judge him, but he had no qualms about judging her. “Well, it looks like Arliana’s miscalculation is now a certainty. Will you say good night to her for me?”

“Certainly.” She nodded instead of offering her hand. “Have a pleasant evening. Although if that takes finding a woman who’s liberal-minded enough to go home with you after two minutes of conversation, I have my doubts. Good night.”

She turned on her heel and stalked off, not looking back until she was almost to the stairs.

By then all she could see of Erik was his retreating back. Dina felt a qualm of remorse. Obviously, his idea of polite behavior would never be acceptable on Fantar, but did she have any right to apply Fantaran standards here on Wakanreo? In any event, she had to explain her premature departure to Arliana.

She turned to survey the crowd again, looking for any sign of iridescent blue and silver. She didn’t see Arliana, but she noticed the silver-headed Wakanrean had left the Ambassador’s circle and was standing by himself in the middle of the room.

Dina wasn’t sure, but she thought he was staring at her. She took a few steps toward the stairs, and his eyes followed her so closely there was no doubt that she was the object of his scrutiny.

No, his animosity. He looked angry—furious, in fact. She had never seen a Wakanrean show so much emotion. His eyes gleamed with rage, and his nostrils flared wide. She took another step toward the stairs, and the Wakanrean began to walk rapidly toward her.

Dina fought panic. What could she have done to make him so angry? She hadn’t come close enough to any Wakanreans to offend anyone. She clasped her hands together to reassure herself that her gloves were on.

The silver-haired Wakanrean came closer still. Under his cape he wore a long, blue robe instead of the trousers and loose, tunic-style shirt favored by Wakanreans of both sexes. He was very close now. His golden facial and body fur combined with the creamy white of his crest reminded her of some Terran animal, but she couldn’t remember which one. Other than the dark blue trim on his robe and the diamond-shaped pattern that decorated his sandals, his only adornment was a piece of silver jewelry fastened at the base of his throat; she couldn’t tell if it was pinned to his robe or his chest fur.
Dina could feel herself breathing faster, her heart pounding hard. She should walk away. Why couldn’t she move her feet? She stood waiting by the mezzanine railing, as still as if she had taken root in the floor.

The Wakanrean stood in front of her. He glared down at her, his face contorted into a scowl, his amber eyes glowing with contempt.
“I beg your pardon.” Dina tried to keep the quaver out of her voice. “Do I know you?”

He was so close, she could feel the heat from his body. Either that, or the room had gotten suddenly warmer. Dina felt herself flush from head to foot.

He didn’t answer, but all at once it was as if his anger was a physical thing, an invisible mass, pushing against her. She stepped backward, stumbled, and almost fell.

She reached for the mezzanine railing behind her, and in the same instant, the Wakanrean grabbed her arm.

Dina froze, utterly baffled. The orientation had said clearly that Wakanreans would always avoid touching a Terran, and yet here was one not only touching her, but holding her firmly by the arm and helping her to stand.

The orientation had also failed to warn her that a Wakanrean’s touch was so warm it almost burned. Dina could feel a flush of heat on her arm where his hand still gripped it. She stood straighter and looked into his face. He had typical Wakanrean features—an arched nose, large round eyes, a wide mouth.

His expression changed as she watched. His anger faded to confusion. He looked almost stunned. His nostrils still flared, but from the way his eyes had opened wide, Dina knew he was surprised rather than angry.

Neither of them had taken a step since he took hold of her arm. Dina swallowed once, conscious of discreet glances and overt stares from those around them.

“I’m all right,” she said finally, wondering if she was speaking the truth. The dizziness had passed, but she still felt lightheaded. “Thank you, but you can let go now.”

He loosened his grip but didn’t release her for a few seconds. When he did, he brushed her bare arm with the back of his hand. Dina was amazed when it sent shivers of anticipation up her spine.

“This is unexpected.” His wonderfully resonant voice had a rich, warm timbre to it that made Dina’s shivers change from anticipation to yearning.

“Yes,” she said, unsure of what he meant, but afraid to give offense.
“Where do you live?”

“I have an apartment in the off-world sector,” she said, wondering why she was answering him. She fought the urge to close her eyes and just listen to that wonderful voice.

“My house is in the cliffs outside the city. Let’s go there instead.”

It took Dina a moment to realize that she had agreed to go home with him.


Carmen was born in Hawaii and experienced a childhood on the move, as her father was in the US Navy. Having raised two wonderful children, she now lives in Maryland with her husband Charlie, and a beagle named Cosmo. She writes science fiction and romance, mostly set in the far future, and the occasional fantasy.