Dr. Nikki Bell is devastated when the Watchers reappear without her alien lover. Why did he return to his home planet without even leaving a message? In search of answers, Nikki jumps at the chance to join the diplomatic team invited to visit the aliens’ home world. On Rishalt, she must contend with the intricacies of Warrish society and an undercurrent of hostility.

Kiron Arqin Ramis is summoned home by his family to the unwanted honor of a new triad and union with a high-ranked female. Unable to forget Nikki, he endures a perilous exile on a wilderness planet instead of complying with his family’s demands. But, the Triarchs have other plans for him.

Stakes are higher than the lives of two individuals. Earth leaders are desperate to acquire the alien interstellar technology, while Warrish dispute the advantage of an alliance with inferiors. Can Nikki and Kiron pierce the barriers separating them to find happiness with provoking an unequal war?

With Nikki following, Kiron dove into deeper water, and descended to the seabed. Soon he spotted a cluster of the flower-like triales and beckoned to Nikki. They landed on the sandy bottom.

“Lovely,” she mouthed, gazing at the triales swaying in the current. Each one had a long stalk topped by three oval petals in pastel hues of pale azure, rose pink, or primrose yellow. Feeder filaments wriggled in the center of the imitation flower.

Joy thrilled into him, noting her graceful figure and intent focus on the animal flowers. She was lovely. Standing behind her, he leaned over to breathe, “beautiful,” in her ear, and bent down to nuzzle her bare neck.

She giggled and swung to face him, shaking her head in mock disapproval. Her teasing smile contradicted her admonition.
Gladly yielding to temptation, he leaned in to kiss her. Her inviting expression flipped to open-mouthed terror. A shadow moved across her pupils.

Alarm instincts honed in battle kicked in. He shoved her away and ducked. Spinning to confront the menace, he pulled out his prodder. A giant tantra lunged at him, its orange and blue batwings angled back, and its tentacle-ringed mouth agape.

Its sticky tongue shot past his head, burning agony across the skin of his biceps. He fired into the maw. Dodging backward, he knocked against Nikki.

She stumbled aside, gripping the harpoon in both hands. He dove to catch her, grasping her shoulders and steadying her in place. She shot the bolt into the horrid maw. Recoil slammed her against his chest. Wrapping an arm around her trembling body, he aimed his prodder at their attacker. He didn’t fire. Her bolt had hit a vulnerable spot.

The tantra jerked vertical, its gullet pumping water from the wound. Its stinging feelers whipped from side to side, and its skinny tail churned loose sand into eddies.

“Good shot,” Kiron said, tugging Nikki away from the thrashing predator. His upper arm smarted from the stinging tongue of the tantra, and Nikki had not escaped its toxic touch. It had scored a red weal across her right ankle. He grasped her waist and hit his jets. They sped above the sea bottom. When the tantra had vanished from sight, he slowed and halted in the shelter of a reef.

Nikki clung to him, still panting in reaction.
He inflated the bubble tent and pulled her inside the air-filled shelter.

Plopping onto her butt, she cried, “What was that animal? My leg feels like I ran into a furnace.”

Stroking her fingers down his chest, she said, “They can’t penetrate this bubble. Correct?”

He breathed, “We’re safe.” Lifting his uninjured arm, he brushed her hair and caressed her soft cheek.

“Then, kiss me.” She leaned toward him, an expectant smile on her sweet face. 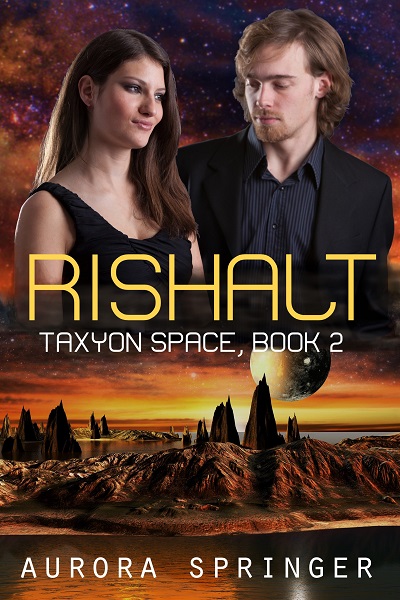 Review of Rishalt,
book two of the Taxyon Space series
by Aurora Springer.
Review by CLM

When the watchers return, there is one missing: Kiron, the sentient Nikki has fallen in love with.

(Sadly, he’s been called back to his planet, where he is expected to marry into a triad marriage. That’s a marriage between three men and three woman as is the custom of his world. Only Kiron refuses, since he only wants Nikki.)

Fortunately, Nikki is selected to be one of the six earth people allowed to go to Kiron’s home planet. Sadly, that turns out to be a very dangerous honor for her. There are sentients who want Nikki to go away!

As in all of Springer’s stories, the detail is exquisite, the creatures vivid and captivating.

I thoroughly enjoyed the various sentient animals, (at least the nice ones—many were deadly) and all the intrigue and attempted murders. Also, Nikki isn’t the only strong, can do, female in this story.

Not surprisingly, I give it five stars! 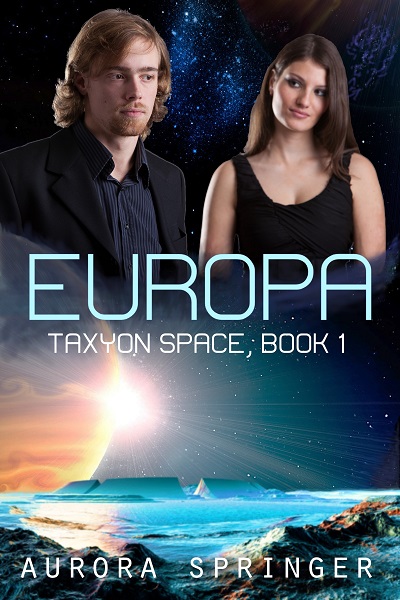