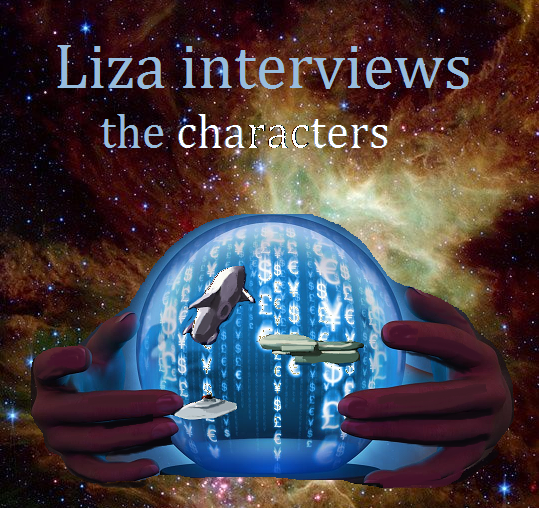 Today, I have the characters from Corrina Lawson's book Ghost Phoenix for an interview.

Space rep: ALL of them?

Liza: No, just two: Richard and Marian. No one but me would think it clever to send nine characters to be interviewed.

Space Rep: Yeah that was a space poop move.

Liza: Why don't you search Corrina's ship and see if you can find the buy links.

Space Rep: And what your planning to do?

Liza: First, I have questions for Richard.
When and why did you leave the Immortal court and your family?

Richard: I prefer not to talk about it. That is a private matter. Suffice to say, it was clear that my opinions were not valued by the members of the court. They wanted to go in a wrong-headed direction and I didn’t wish to follow them.

Liza: Do you often call old men ‘a child’ or were you just annoyed with Marian’s grandfather?

Richard: Old men who haven’t learned how to move past childish posturing, especially intimidating those they should love, are children.

Liza: Is this Mad Monk of Russia that you and Marian track down by any chance Putin?

Richard: No, not that I know of right now. Putin appears to be interested in political power, rather than other sorts. But he also strikes me as a child, always showing off, always having to prove he’s the one in charge. He may have some part to play in it.

Liza: Exactly how old are you?

Richard: Five hundred and forty two years old, as of this month. Hmm…that does seem old, does it not?

Richard: It’s harder to stay with the world if you isolate yourself from regular humans. The court does that and, as a result, they can be out of touch. But I live in California among surfers and at least keep up with them. It's impossible to keep up with everything.  Your question assumes that there is one clothing style to remember when, in reality, there are a dizzying number of modern styles. I pick one, that makes everything so much easier. Laws, I ignore unless they infringe on how I want to live. The basics of not destroying another person are similar. It astounds me how much English common law is still used these days, though such things as driver’s licenses and identification cards confound me.

Liza: You are very handsome. Do you ever seduce mortal humans? Could they have a child from you?

Richard: Thank you, though that is a very personal question. I do not seduce women; mostly, I let them seduce me. That assures me they’re absolutely interested because, as you mention, I’m not always up on modern rituals, especially courtship. Letting the woman lead the way makes it so much easier.  It also helps to ask them what they want. A trick my late brother never learned.

As for children, that is unlikely. Immortals such as myself seem to have great difficulty fathering children. It may be that our genetics degrade to such an extent over time as to make that difficult.

Liza: When was the last time you had a serious girlfriend?

Richard: Mmmn….now you make me think. It has been a very long time and she wasn’t an ordinary human, she was a member of the court, someone gifted with telekinesis. But, unfortunately, she was not gifted with  immortality. She had the kindest soul of anyone I’ve ever known and she was so determined to put what she called “God’s gift” to use. I learned so much from Elsabeth.

That was two hundred years ago. No one serious since. Next question.

Liza: What traits of Marianne annoys you and what traits do you like?

Richard: Marian doesn’t annoy me; I just wish to see her true self and I don’t have time to waste while she decides to trust me. It is clear that she is being squashed by her grandfather and has some resentment built up. I need her mind clear for our task.

Liza: What’s the best memory of your childhood?

Richard: Ah, that is asking me to think very far back, in the dim recesses of memory. Perhaps the day my father stirred enough to take us hunting. He drank too much, ate too much and was in good humor with myself and my brother the entire time. My father, Edward IV loved life, a little too much. Perhaps a day after that, when all looked lost, was when Marshal showed up to help my brother and me survive. It was the start of a new life, one filled with wonders. 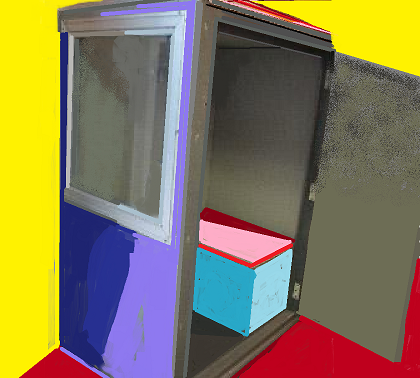 Liza: Thank you. Now if you don't mind, go sit in the soundproof booth while I question Marian.

Liza: Can you discuss your relationship with your grandfather? Richard seems to think you don’t like him.

Marian: I’m the only Doyle with the phantom ability in my generation. My grandfather wants to control that ability and therefore control me. He sees the family as his obligation and I’m just a cog in that wheel. It’s frustrating, overwhelming and difficult to have your opinions disregarded.

Liza: How did you feel when Richard shows up telling you all about yourself based on the items in your office?

Marian: It was..disconcerting. But I can’t deny he was right.

Liza: I understand you are a mortal human with a genetic anomaly that enables you to manipulate molecules so that you walk through walls. When did you realize you had this skill?

Marian: This ability is genetic, so every Doyle child is watched closely to see if it manifests, usually around adolescence. I got my period and turned intangible for the first time on the same day, which was memorable, to say the least. Luckily, my great-aunt was able to teach me how to use my ability without danger.

Liza: How have you used your gift in the past?

Marian: Mostly in the service of the firm to bring certain items in for certain collectors through back channels. No, that’s how my grandfather would put it. I’ll say it plainer: I smuggle illegal artifacts for our clients.
I’ll also admit it makes my life a lot easier if I lose my house or my car keys. J I like my ability. I’m just growing increasingly unhappy with how it’s being used.

Liza: How do you plan to use your gift for this case?

Marian: Richard wants to find an object thought long lost to time. Many times, artifacts are buried at historic sites or at sites that are unsafe for architectural digs. My phantom ability lets me explore these areas without disturbing their history. Once we find the general area where our item is located, then it’s up to me to literally lay hands on it.

Marian: He stood up to my grandfather for me. He’s intelligent and he obviously notices all the little things. I like a man who notices.
Oh, and he looks like a fairy prince out of some tale. Damn.
Bad points?
He often keeps his own counsel and obviously doesn’t trust easily.

Liza: Do you think Richard has acclimated well to modern society?

Marian: He certainly seems to move freely in it but he keeps a certain distance, too. I’d say he’s learned to exist in it but not be completely part of it. In that, he’s not unlike some of the very rich clients our firm represents.

Liza: What’s your biggest challenge with Richard and this case?

Marian: The item he needs me to retrieve may not exist.  And I can see Richard is going to have his own ideas on how to do my job.

Liza: Do you consider yourself brave and confident?

Marian: No. All the dangerous things I’ve done in my life have been because my family obligation demanded it. If I were brave, I’d learn to stand up for myself.  I’m confident about my knowledge of European history and how to use my ability, at least.

Liza: What is the best childhood memory of your life?

Marian: Oh! Right after my phantom ability manifested, my sister and I spent the summer with my great-aunt Eunice and her big, empty home in Newport, Rhode Island. We had such fun exploring that summer. My aunt would give me lessons in the morning on becoming a phantom and then sent us free to roam. I was thirteen, my sister Jenn was fifteen. The best summer of my life.

Liza: Well, that’s a lovely place to stop. Thank you for your well-considered replies. Now let's find out more about this book. 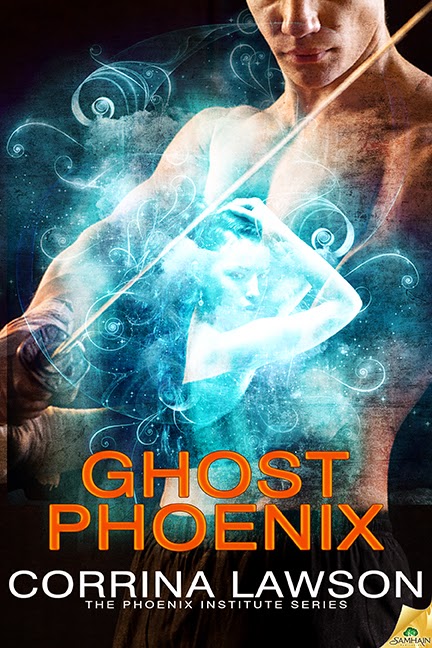 Richard Plantagenet, self-exiled prince of an immortal court, is content living the uncomplicated life of a California surfer. Until his brother’s sudden death and his Queen’s wasting illness wrest him from his ocean-side solitude for one last quest.
The Queen needs a cure. To get it, Richard needs assistance from someone with a singular—and slightly illegal—talent.
As the latest of a long line of ghost-walkers, Marian Doyle can, literally, walk through walls—bringing objects with her. Her gift comes in handy for her family’s shady antiquities business, but Marian’s had it with breaking the law. She wants a life of her own choosing.
Instead, she gets Richard.
Their mission seems simple: Find the body of Gregori Rasputin and procure a small sample of his DNA. But when they discover the Mad Monk of Russia is very much alive, the prince and the phantom must form a bond to battle a man who desires to remake the world in fire.