The Cairns of Sainctuarie by Hawk MacKinney

Today, we have Hawk MacKinney and his latest book, The Cairns of Sainctuarie.

Peep Rep: I think you mispelled the title...again.

Liza: Well I think you misspelled 'mispelled' and in fact I did not misspell Sainctuarie.

Peep Rep: My bad. Is there a prize to cheer me up?

Liza: In fact, Hawk is giving away a $25 Gift Card to only lucky person who enters the Rafflecopter.

Peep Rep: That would cheer me up. So what's the book about? 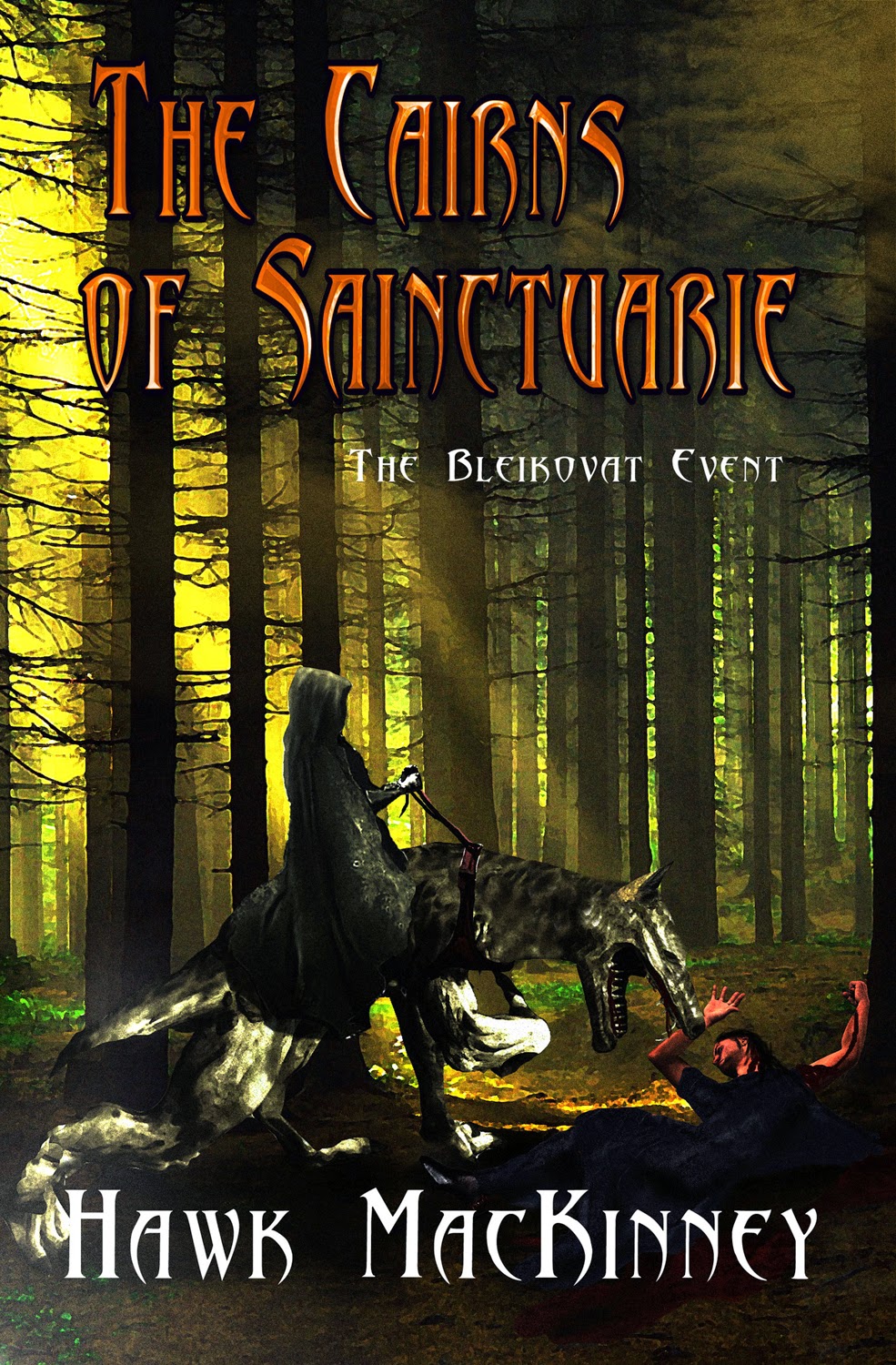 The Cairns of Sainctuarie: Volume 1, The Bleikovat Event
by Hawk MacKinney

Among the close-kin clans of western rural Malfesian Murians, farming and gelf ranches are long held traditions.  Times are good…full barns, fat gelf calves and large families thrive among the sprawling grain fields and hamlets and the river from which they derive their name—the Feldon.  Word comes with the trade caravans that times are not so good in the regions far to the east of the Feldon River:  tumultuous changes stir among the remote province of Bleikovia.  Old timer Feldovats shrug it off as one more squabble between clans over boundaries or water rights…too distant to affect the Feldovats.
The western clans learn too late, however, it is no local squabble.  Outnumbered and unprepared, Feldovats resist a hoard bent on plunder and conquest.  Days of battle along the Feldon River stain the riverbanks in green Murian blood.  In the finals days of exhausted fighting, Judikar Klarvko Celo, leader of the Clan Klarvkon and the Feldovats, is fatally stabbed with the slow-acting sevon poison.  The Judikar’s consort, Etikaa Klarvkaa, becomes Regentkaa, and with Celovat Field Commander Korvo Celo serving as her advisor, she leads the demoralized Feldovat survivors on a gruesome ill-prepared winter trek through high mountain passes of ice and blizzard snow in an attempt to elude the Green Dragon forces of the Bleikovats.

Etkaa’s only son, Klarvko Celo II, helps spirit Feldovat young across a remote mountain exodus to the west toward Eedov Province.          The battered, starving Feldovats reach the Malfesian coast at Eedov City only to be confronted with their implacable enemy determined to destroy the remaining Klarvkon rabble.  Taking passage on crowded lumbering Maalonovion freighters, Feldovats and Malfesian refugees set sail.  On arrival in Maalon City they are welcomed among their Maalon hosts, and settle into a new life.
But famine and a pandemic pestilence stir old hates and nurse former ambitions.  The enraged Overseers of Bleikovia move against the Klarvkons, this time bringing bloodshed to Maalonovia.  The exiles from the Feldon must fight once again, but starvation and plague across the Planete Myr make it a different war from the battles along the Feldon…a na’ä blikovat…the Bleikovvat Phenomenon…an event with unexpected consequences and outcomes none could have foreseen.
Before the vendetta killing is exhausted, the Regentkaa Klarvkaa and her son are swept onto the Maalon throne, setting the Klarvkon Dynasty and the Murians toward an intergalactic golden age, and a star-flung destiny the once-agrarian Feldovats could never have envisaged.

Etkaa pulled back a canvas siding of the shelter.  Distant dawnlit skies to the west glowed with billows of dull red already sweeping through the far provinces.  She swallowed a sour distaste, knowing her part in the doing of this.  There were no protests.  Their last illusions going up in smoke…taking more than hope in the going.  No longer could these exhausted bloodied fighters hold any hope to throw the Bleikovats back across the river…or return their lives to the ways they had been.  The pale Murian skin of stunned faces washed red by the flames in the west saw the sprawl of war consuming everything.  The dazed faces of the fighters said more than words.
One grizzled warrior’s anguish stabbed out, "...our crops burned, gelfs slaughtered…do those orders you hold show how we are to feed what families we may have left?  Better we stayed on our farms.”  Honest feelings spoke from a pained heart confronting the unimaginable.
Etkaa said, “We will share what food we have.  Better that than crumbs from a Bleikovat table.”
From another Feldovat warrior, “Better we return to our hamlets and fields while we can.”
Etkaa said, “Those who would return may find much worse than ashes.”
“Yes…ashes…” the Feldovat shouted.  “Burned by your orders.  Not Klarvko’s.”
Etkaa fought the wash of sadness.  Left her with nothing to say.  Much of what the warrior said was true.  A harried Korvo said, "There is another troubling matter.  With nothing to relieve their pain, the severely wounded and those poisoned cannot be moved into the mountains."
"I do not care what is written in the orders,” someone shouted.  “I will not leave clan kin to the Bleikovats.”

This was an unexpected read for me.

This is one of the best World Buildings that I've ever read.

Normally, I don’t like war stories, and from beginning to end this was a story of war, peppered with faint moments of love, brief moments of joy, but mostly, the grueling, never ending senseless death of people as one tribe, rather like the roman army, sweeps across the lands stripping others of food, conscripting the men, and killing those who refused to join.
Despite being out-armed, one tribe fights back And while the conquerors declared them defeated and destroyed, they continued to survive. Impressed by their courage and strength, the remnants of other tribe swear allegiance and fight beside them.
When the leader of the tribe succumbs to poison, his wife shocks everyone, & declares herself regent. She quickly proves herself a worthy leader both in planning battles and intuiting the enemy’s next moves.

While I often found her disregard for her safety and some of her efforts to be poorly conceived, making me want to yell at her. I did so, because I cared greatly that no harm come to this woman, her warrior love, or her returned son.
The only time where I got a bit antsy was during the financial/economic discussion mid-way in the book. As a financial analyst, I thought it well thought out, I just thought it was more than even I wanted to know. But it was soon over and I was gripped by the story once again.
I received an advanced copy of the book for reviewing and it still had a few misspellings. Hopefully, those were fixed. Nothing to pull me from the story, just an oddity for the otherwise well-written story.
So to wrap up my review: I should have hated this book. Instead I couldn’t put it down. It's world building was par none. It flowed very well and was superbly written. The author clearly did his homework, for everything is laid out in great detail, which would normally bore me with excessive detail, but did so only during the financial discussion.  Other than that I couldn’t stop reading and got teary eyes several times.
Is this book filled with complexity?  Oh yeah.
Did I get mad at the heroine several times? Yes I did.
Did I ever stop liking her? Not for a second.
Did I like her husband and her fierce protector?  Yes I did, very much.
Did I like the ending? Yes and No. I did like the ending, but I also felt disappointed. Possibly because, unlike the novel which is full of clarity and specific details, for me the end fades softly.
As to Recommendations: If you like constant battles between tribes on a different world with deadly mounts far fiercer than a horse, definitely read this.
If you like strong women heroines in war, you should like this, unless you expect real romance, which you do not get here.
Due to ending and the  financial lesson, I give this a 4.5 stars, which I have to round to 5 because even though I normally don't like war stories, I couldn't but this one down.

That's a lot of stars from someone who shouldn’t have like this book at all.
I still don’t know how that happened. 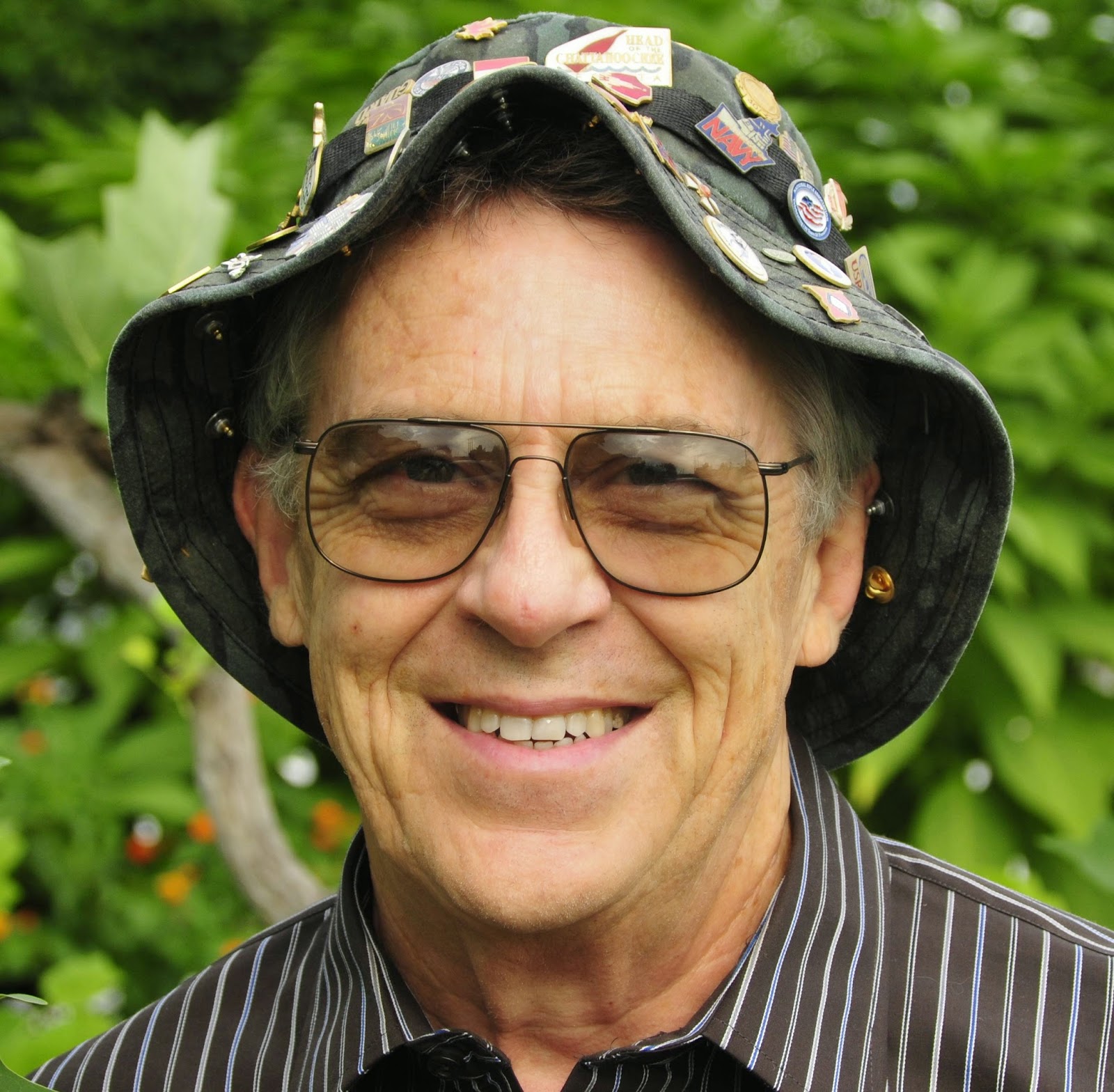 Welsh and Scottish Hawk MacKinney grew up in northwest Arkansas, and wrote for his school newspaper. Hawk served over twenty years as a Special Staff Corps Officer with the U.S. Navy and U.S. Marine Corps, a Naval Academy Blue and Gold Recruiting Officer, a Navy Recruiting Command Liaison Officer, and Commanding Officer of units attached to the U.S. Marine Corps bases at Parris Island, South Carolina and Twentynine Palms, California. Along with his postgraduate degrees, he studied English and Russian history and foreign languages. As a faculty member in major medical and veterinarian universities, he authored professional articles and taught postgraduate courses in the United States and Hadassah Medical School, Jerusalem. In addition to his sci-fi series, The Cairns of Sainctuarie, Hawk MacKinney has authored the Craige Ingram Mystery Series and Moccasin Trace, a historical romance nominated for the prestigious Michael Shaara Award for Excellence in Civil War Fiction and the Writers Notes Book Award.

And don't forget the $25 gift card
a Rafflecopter giveaway
Posted by Liza O'Connor at 12:00 AM