Today, I have another cover reveal, this one by the talented Sabine Priestley. It's book 2 of the Aliens Attachments Romance, and it's called: 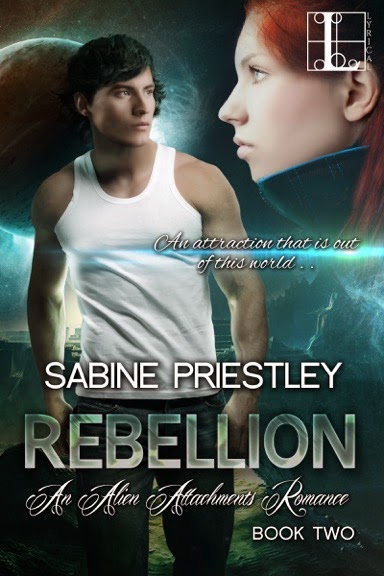 Ria Montori is no stranger to kicking ass. Despite her petite size, she’s a former Sandarian military officer currently serving the Cavacent clan and adjusting to life on a strange planet called Earth. She has no time to search for her psi-mate: the one being who could bring her pleasure beyond any mere physical intimacy. Which doesn’t explain why she’s bonding with a Curzan native who just killed a government official.

Ty Sordina hates Ria’s kind. The Sandarians enslaved his people, and murdered his parents in front him when he was a child. He has sought revenge ever since, and nothing will get in his way. Especially not a feisty redhead who challenges his every instinct, and calls to his psi like no other.

But there is a war coming. And the two beings who want nothing to do with each other hold the fate of an entire planet in the heat of their undeniable desire…

Sabine Priestley Sabine is a lifelong fan of Science Fiction and Romance novels. When the characters in the Alien Attachments series started talking to her, she had no choice but to write. They’re still talking and she’s still writing. Sabine lives in Florida with her husband, kids, cats, and a whole mess of characters in her head.
For more please visit www.sabinepriestley.com.

Available for pre-order now.
Amazon
Posted by Liza O'Connor at 12:00 AM