While searching the universes, Liza, (that's me in the cute spacegear) has found the coolest book. Check it out!!! 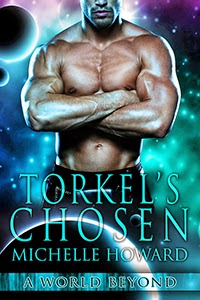 What would you do if Earth didn’t have enough men?

Would you take a chance and leave the only world you knew behind?
This is the decision Faith Reid faces. Placing all her hope in a new government program, she seizes the opportunity that offers a chance for the women of Earth to find love among the stars, on a world beyond the one they know.

How many times can one man risk rejection?
Would you give up on your dreams?
Torkel Alonson has had enough of being ignored and looked over by females on his adopted home world of Enotia. His pride has suffered and he must accept the painful truth. Females will never choose a male with his evil lineage despite his honorable service to his government’s military.

Can two people looking for the same thing find not just what they want but what they need in one another?

Torkel bit back his frustration as the females ran past his position in the sands. One after another they squealed and laughed as they selected his brethren. True Enotians with their blond hair and light-colored eyes. Through it all he maintained his stance with his hands clasped behind his back, legs spread wide. Another year, his last in the sands.

The ache in his chest caught him off guard. No matter how much he thought he’d prepared, disappointment coiled its way through his heart. To make matters worse, there was one more male in the numbers than females so he’d walk from the sands alone. His shame to bear in stoic silence.

“I’m not sure how this works. Do I just hand you the necklace or put it on your neck?”
Torkel jerked and glanced down at the short woman standing in front of him. He’d tried to ignore her presence when her footsteps slowed in front of him. “Pardon?”

Michelle Howard enjoys a crazy life that involves wild kids, a loud dog, and a husband who tolerates the madness.  Like many authors, she’s dreamed of writing since reading her first romance novel many years ago.  She loves paranormal and contemporary romances and is a fan of the classic romances, such as Judith McNaught and Julie Garwood.


Sign up for my newsletter via my facebook page or blog
Posted by Liza O'Connor at 12:00 AM