Jessica Subject has combined 5 of her 1NS novellas into a box set.

Today, I have the fabulous Jessica Subject over. She has combined five of her 1 Night Stands into a sizzling hot box set.
(I only hope it doesn't catch on fire, because I'm not a 100% certain that all aliens carry about a fire extinguisher with them.)
More Fab News: There's a $25 Gift Card just waiting to be claimed by one you.
So grab your fire extinguisher and let's go! 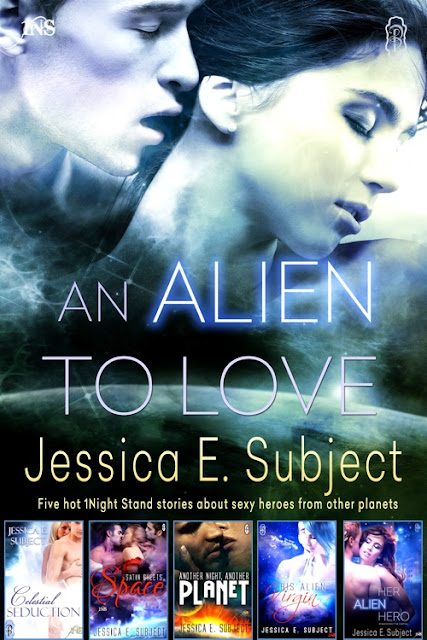 Reviews:
Celestial Seduction:
“If you’ve never thought of the stars as steamy, this [story] with have you rethinking the entire sci-fi genre.”
~ The Indie Elite
Satin Sheets in Space:
“…shakes your world up in unimaginable ways and Jessica Subject is showing that she can both rock her readers’ worlds and give them the happily ever after everyone is secretly longing for.”
~ Tracy Riva Reviews
Another Night, Another Planet:
“…a fantastic representation of the [1Night Stand] series. Hot sex along with some interesting twists kept my interest from the first page.”
~ a TOP PICK at Night Owl Reviews
His Alien Virgin:
“It’s no secret that I am a huge Jessica E. Subject fan. She is a master of creating complex characters, solid plots, and incredible emotions in a short a amount of time… This fast paced sexy little story is another great addition to the 1 Night Stand Series.”
~ Wicked Readings by Tawania
Her Alien Hero:
“This story is hot, funny, & out of this world. It’s a quick dose of romance in a way that makes you believe your wildest dreams are possible.”
~ Pure Jonel

Review of An Alien to Love Box set
What a fabulous set of short 1 Night Stand stories by Jessica Subject. I’m not going to discuss the plots because you’ll enjoy the stories more discovering that for yourself. But I will discuss the overall umbrella. As you may know, Madame Eve sets up one night stands that tend to be with your perfect mate and thus they never end up being a ONE night stand. Turns out it’s no different when she’s dealing with aliens looking to love an Earthling, except in my opinion the plots are even more interesting.

I’ll be honest. I thoroughly enjoy Jessica’s sci-fi stories and had already read a couple of the stories included in this boxset. To my amazement, I enjoyed those stories just as much if not more the second time around.
I’m happy to report that the same story line isn’t rehashed in all five stories. Each story is unique. Yes, they each sign up for a one night stand with Madame Eve, but the similarities end there.

What I greatly appreciate are the excellent plots that go along with the spicy stories. And be warned, some of these stories are so hot they might short out your kindle.

So if you enjoy spice in your sci-fi, or just want to have dreams of what an alien can do in bed, then this is your box set.
I give it 5 new born stars!

Knowing how much I love one of the books included, Jessica gave me an
Extended Excerpt from His Alien Virgin

I wish I could share more, but we must stop now and talk about Jessica... 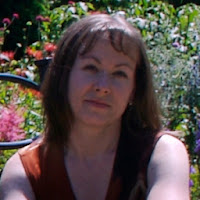 Jessica lives in Ontario, Canada with her husband and two energetic children. And she loves to hear from her readers. You can find her at jessicasubject.com and on twitter @jsubject.
Website/Blog | Newsletter | Twitter | Facebook

To celebrate the release of AN ALIEN TO LOVE, and four years published, Jessica E. Subject is hosting a contest for a $25 e-gift certificate from Amazon.com or All Romance eBooks. Enter using the Rafflecopter widget placed below, or follow the link.


Please Note: Contest is international. No substitutions can be made. Must be 18 or over to enter. Void where prohibited by law. Good luck!