Liza interviews the book with Space Rep’s help:
Liza: So tell me—
Space Rep: Hold on. The book has a dramatic question. You’ve got to let it ask its dramatic question first.
Liza: Sure go ahead.
Book: SHE SAVED COUNTLESS SOLDIERS IN
THE WARS … BUT DOES SHE HAVE THE WEAPONS TO FIGHT AN OUTBREAK?
Liza: Hey!
I didn’t say you could play with the fonts!

Space Rep:  I like the font.
Book: Thank you.
Liza: You like it now, but what happens when It’s uploaded to Google and sent to a Fantalar?
Space Rep: Where’s that?
Liza: No clue, but I believe the heroine of this book knows.
Space Rep: Em, can I call you Em. Liza will only let me use three letters for your name, but Emi makes me think of a small child or an enema
Em: Call me Em. Liza you may call me Dr. Emily Shane, veteran of the Sector Wars, also known as “The Angel of Fantalar” for my bravery under fire as a medic.
Liza: Excellent Dr. Em. Can you drop the PR nonsense and tell me the gritty truth about your time in the Sector Wars?
Dr. Em *sighs* Truth is I have plenty war wounds--severe PTSD and guilt over those I failed to save, but I really don’t want to talk about it. In fact, I desperately needed to get away from it, which is why I agreed to become the ship’s doctor on this huge and luxurious interstellar cruise. I had hoped it would help me to forget the past.
Liza: How’s that working out?
Dr.Em: Well, the job has some unexpected perks.
Liza: Such as?
Dr. Em: It has a luxe beach deck with water imported from Tahumaroa II which is very relaxing.
Liza: What else?
Dr. Em: Security Officer Jake Dilon heats me up like a tropical sun.
Liza: Is this just a physical thing or do you have anything in common?
Dr. Em: Actually, we both spent time in the Sector Wars.
Liza: So what… you share PTSD symptoms with each other?
Dr. Em: No, we are both trying to forget and heal.
Space Rep: Then why do you look so stressed? Is Liza and her questions driving you crazy? Because I could take over if you want.
Dr. Em: No, Liza’s not the problem. *Lowers voice to a whisper* It turns out Jake and I didn’t leave all perils behind in the war.
Space Rep: What’s wrong?
Dr. Em: A mysterious ailment aboard the Zephyr has begun to claim victim after victim … and we must race against time and space to find the cause and a cure!
Space Rep: Or you and Jack should jump the ship at the next docking.
Dr. Em: We can’t dock anywhere.  We are trapped on this ship. No spaceport will allow us to dock.
Space Rep: Cheer up, it could be worse. You could have a temperamental princess and a terrorist on board.
Dr. Em: Actually we have both of those and the terrorist won't hesitate to take down any being in the way of his target. If anyone's left when the disease is through with them …
Space Rep: Liza, I don’t know what to advise her to do. It all sounds rather hopeless.
Liza: This book belongs to Veronica Scott. Her characters should expect no end to trouble and not always from the one you suspect. However, I’ve never seen her hero and heroine fail, so Dr. Em, stay alert, remain concentrated on your multiple tasks and DON’T GIVE UP, because the readers expect an HEA. So stop chatting with Space Rep and get back to saving that ship. You should be aware, since you can’t dock anywhere, food is going to grow scarce as well. Good luck and don’t disappoint me.
Dr. Em: Thanks for the peep talk. I was feeling uplifted until you mentioned the food issue.
Liza: Nonsense, you been through war. You can do this! Now open up your cover so I can read an excerpt! That’s an order Dr.!
Space Rep: Why are you yelling at Emily?


Liza: Because soldiers do better when barked at.

A never before shared excerpt:

“We’ve run out of time, Captain. We need to institute measures to contain this outbreak right away.” Years of conducting military briefings for superior officers stood her in good stead as Emily outlined what was happening in sickbay and then said, “Passengers and crew should stay in their cabins and notify the ship if experiencing symptoms or showing the characteristic purple bruising. We’ll have to send teams in biohazard suits to pick them up and bring them to the quarantine ward on Level C. I’m going to need the entire level set aside if the current rate of new patients keeps up. Any luck on finding me more medical staff among the passengers?”
“There are three doctors listed on the manifest,” Maeve said. “All have been contacted and requested to report to you within the hour. I’ll redirect them to the quarantine ward on Level C. I’ve further identified an ex-military medic and a nurse among the crew.”
Biting her lip, Emily kept herself from making a sarcastic remark in response to the AI’s cheerful tone. “Those reinforcements will help, but I’m going to need a lot more if this outbreak keeps growing.”
“How contagious is this bug, Doctor?” asked the captain.
“I don’t know.” At his frown, she said, “We’re theorizing the military inoculations are keeping most of the crew healthy.” She did a rapid mental review of the earlier spread of the “norovirus,” before continuing to answer the question. “It’s not a clear pattern. Take the Enzell family, for example. The father never came down with the intestinal symptoms. All three of his children did, but so far two remain free of the second-stage symptoms. In Princess Falyn’s retinue, only Arln and one other guard were affected in stage one, despite all being in close proximity in her suite. I can’t extrapolate from such a small sample, of course, but anecdotally, the data indicates less than one hundred percent contagion.”
“I’ll take any shred of hope you can give me right now, Doctor. Keep me posted. I’ll drop the ship out of hyperdrive and put in a call to the authorities at Sector Hub at once.”
He clicked off. Emily drummed her fingers on the desk. “Get me Jake, please. I desperately need to talk to him.”
“He reports he’s on his way to sickbay. ETA three minutes,” Maeve answered a moment later. “You have a considerable backlog of incoming calls now, Doctor.”
Instinctively, Emily moved to summon the call log to begin dealing with them but hesitated with her fingers inches away from the keyboard. “Can you get me Meg?”
“Yes, Dr. Shane?” The cruise staffer’s voice was calm. “I think we can accept patients here on Level C any time you need to send them our way. Maeve’s got half the beds set up.”
“Good, things are getting hectic in sickbay. Can you find two extra staffers to answer the incoming calls and triage them for action? No medical experience is required. I’ll give them a checklist to operate from. I need to concentrate on the patients we have, not try to diagnose and reassure panicky passengers on the vid or the com.”
“I know just the people to handle the task, no problem. I’ll have the girls report to me here. Maeve, I’ll tell you as soon as we can start handling the calls. Anything else, Doctor?”
“Meg, you’re a miracle worker. Nothing else right now, but I’m sure there’ll be more later. I’ll come join you within the hour. ….There should be a few volunteer medical personnel arriving shortly. You can park them in the small conference room until I get there to conduct a briefing. Maeve found some names on the manifest and crew roster.” Emily clicked off the link.
Captain Fleming’s voice came over the ship-wide AI circuits. “This is your captain speaking. Sorry to break into your day, but we’ve run into some complications with the stomach bug a few people were experiencing in the last week. If you or someone in your party is feeling unwell, showing unexplained bruises, suffering a bloody nose or other unusual bleeding, please remain in your cabin. Call the Ship, and you’ll be directed on the next steps to take to obtain medical help. We’re fortunate to have Dr. Emily Shane, the Angel of Fantalar, flying with us as our chief medical officer on this leg of the cruise. You’re in good hands. You may have noticed a temporary dropout from light speed just now, which was necessary so I could alert the authorities at Sector Hub to be ready for our arrival in a few days. Dr. Shane assures me this bug isn’t particularly contagious at this stage—”
“I did not, not with any certainty,” she protested, as if he could hear her. 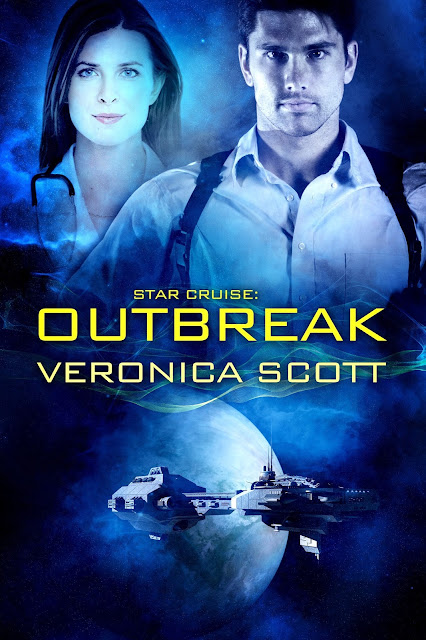 Amazon     Kobo      Barnes & Noble   Apple iBooks
Author Bio:
Best Selling Science Fiction & Paranormal Romance author and “SciFi Encounters” columnist for the USA Today Happily Ever After blog, Veronica Scott grew up in a house with a library as its heart. Dad loved science fiction, Mom loved ancient history and Veronica thought there needed to be more romance in everything. When she ran out of books to read, she started writing her own stories.
Three-time winner of the SFR Galaxy Award, as well as a National Excellence in Romance Fiction Award, Veronica is also the proud recipient of a NASA Exceptional Service Medal relating to her former day job, not her romances! She recently was honored to read the part of Star Trek Crew Woman in the audiobook production of Harlan Ellison’s “City On the Edge of Forever.”
Blog: https://veronicascott.wordpress.com/
Twitter:  https://twitter.com/vscotttheauthor
Facebook:  https://www.facebook.com/pages/Veronica-Scott/177217415659637?ref=hl
Amazon Author Page:
http://www.amazon.com/Veronica-Scott/e/B006CUCJ92/ref=dp_byline_cont_ebooks_1