Pippa Jay arrives with guns. (Should we run?)

Hi, I m Pippa Jay, author of sci-fi and supernatural stories designed to engage the emotions. I am not a fan of real guns - here in the UK, they're the rarity, not the norm. But show me a weapon from a sci-fi show and I'm all...

*coughs* So here are five of my favourite scifi weapons. They aren t necessarily the biggest or the baddest or the most destructive, but they re the ones I love.

1. Lightsaber, Star Wars. An elegant weapon for a more civilised age...So says Obi-Wan Kenobi of lightsabers in Star Wars: A New Hope. A big glowing sword that makes awesome noises when you swing it and it cuts through anything (most notably limbs, going by the films). While mine doesn t cut anything, it does make the cool noises. 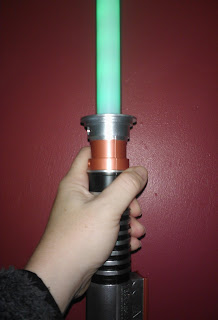 2. Liberator gun, Blake s 7. I couldn t find a picture that I could be sure about the rights of use on, so you'll have to go here to see this unusual weapon. http://static.gamesradar.com/images/sfx/2010/10/151010weapon1.jpg
I loved these because, like the strange spaceship they originated on, they were uniquely different. I even made a very rough replica so I could cosplay at a convention as a teen. You can now find them quite often on eBay (not the real ones, obviously).

3. Quad Blaster, Guardians of the Galaxy. My hubs truly knows what a geek he married since he bought the NERF version of this for me for Christmas (and the film/hero/gun were very much part of the inspiration for Quickshot!) 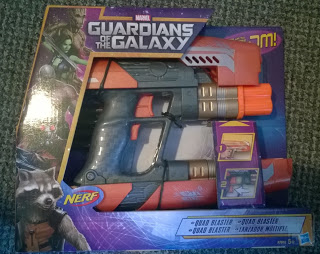 4. Ace s Dalek-destroying baseball bat, Doctor Who (Remembrance of the Daleks). Who wants to beat up a Dalek with a baseball bat? Of course, it's no ordinary bat but one that s been run through the Hand of Omega, a remote stellar manipulator belonging to the Time Lords. An enhanced piece of wood or not, you ve got to admit it was pretty impressive against a race of supposedly unstoppable and perfect war machines.

5. The Sonic Screwdriver, Doctor Who. Okay, okay, it's not a weapon (although it can and has been used as one). Maybe I should have said favourite pieces of tech (but then we d be here all day). This handy, multipurpose little widget, but with an annoying inability to work on wood, has probably saved the Doctor s life more times than he can count. And forget 12th s Sonic Sunglasses  *prrffftttt* Nope, it's the screwdriver all the way... 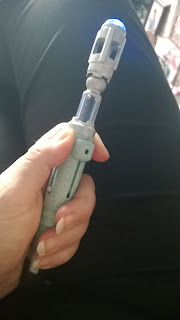 So what's your favourite weapon or gadget, either fictional or real?

Blurb:
Sal, a legal carrier (just about) of whatever comes her way, puts her trust in just two things: her guns.

Keeping out from under Imperium eyes especially those belonging to a certain Ehi Wahu while making a living, and trying to keep a lover who can tolerate her twitchy trigger fingers, are the extent of her ambitions.

Then a kiss from a passing stranger, and a promise of the biggest score in a long time, tempt her. Devin fulfils more than one need, but he comes with more trouble than one woman can handle. And this time it'll take more than her guns to save her. She'll have to trust a man again.

After spending twelve years working as an Analytical Chemist in a Metals and Minerals laboratory, Pippa Jay is now a stay-at-home mum who writes scifi and the supernatural. Somewhere along the way a touch of romance crept into her workand refused to leave. In between torturing her plethora of characters, she spends the odd free moment playing guitar very badly, punishing herself with freestyle street dance, and studying the Dark Side of the Force. Although happily settled in the historical town of Colchester in the UK with her husband of 22 years and three little monsters, she continues to roam the rest of the Universe in her head.

Pippa Jay is a dedicated member of the Science Fiction Romance Brigade, Broad Universe, and EPIC,  blogging at Spacefreighters Lounge, Adventures in Scifi, and Romancing the Genres. Her works include YA and adult stories crossinga multitude of subgenres from scifi to the paranormal, often with romance, and she s one of eight authors included in a science fiction romance anthology Tales from the SFR Brigade. She s also a double SFR Galaxy Award winner, been a finalist in the Heart of Denver RWA Aspen Gold Contest (3rd place), the 2015 EPIC eBook awards, the 2015 RWA LERA Rebecca (2nd place), and the GCC RWA SilkenSands Star Awards (2nd place).