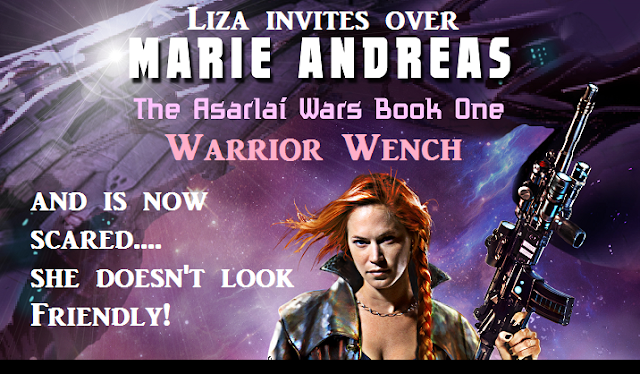 This is the scariest person I've dealt with all year!  So you'll understand if I'm rather timid with my questions...
Liza: You are a bit offputting with your pissed off expression and that big ass weapon.  Have you considered a bubblebath? They always make me feel better.

Vas: I actually love bubble baths. Until a bubble goes up my nose. Then I take out a tiny sword and slice all of them in half. Slowly. My crew really prefers I don’t take bubble baths anymore because of the war cries I yell as I slaughter the innocent bubbles. They echo in the ship’s corridors.

Liza: Did you have a nice time on your vacation?

Vas: I think Tahiti is a magical place. Wait, that was a TV show we picked up on long range scanners. I don’t know what happened. Do you know what happened? *pulls out blaster* if you know, you’d better tell me…bubble girl.

Liza: Okay, you’re scaring me, again. Just breath in and relax. It’s not uncommon for the first day back from a vacation to be a bit trying.  I gather yours was difficult?

Vas: Really, horribly crappy. Thanks for asking. I think you have a bubble on your nose *creeps forward with tiny sword*.

Liza: I rubbed it off. So calm down. I’m trying to help you make sense of matters. During your missing month, do you think you had so much fun your brain fainted? Or something more devious?  Do you suspect your crew?

Vas: I have a faint suspicion someone got the upper hand on me. Someone who will pay, once I find a way to figure out what the heck happened. I might drown them in bubbles since you’ve given me the idea.

Liza: I understand you want to get your ship back. Don’t you believe those who claim it was scrapped and scattered about the galaxy?

Vas:  Believe Skrankle? Him? Plluuuease. That pile of moving swamp gas would lie about having an orgasm. He knows what really happened to it. Too bad I can’t ask him anymore.

Liza: Where might your next vacation be? I want to make sure I’m not anywhere near the place. Sorry, but you don’t seem to do well with vacations.

Vas: I’ll be heading for your hometown, somewhere on that odd little planet, Earth. But I won’t tell you when-it’s a surprise J. If you’re nice I might introduce you to Deven.

Okay, I’m running away now. You can tell my readers about your life.  Be nice! The brave ones will probably want to read your book. 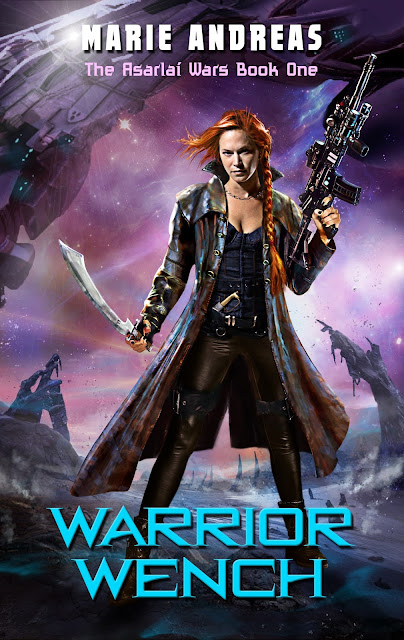 Vaslisha Tor Dain is a mercenary starship captain with a few simple rules: A good ship is better than a great man, in case of confusion always err on the side of blowing someone's head off, and never fall for a telepath or a member of her crew.
All of those are about to bite her in the ass.

Vas’s life takes a turn for the worse when she comes back to her crew after what should have been a two week pleasure trip to find out she’s actually been gone a month and has no memory of missing time. Her beloved ship, The Victorious Dead, has been sold for scrap and its pieces scattered throughout the galaxy. In addition, there are unmarked ships blowing apart entire planets and the Commonwealth government can’t, or won’t, stop them.

And that’s just her first day back.

Vas has to fight her crew, the Commonwealth, and a mysterious cadre of warrior monks to get her ship back and save a universe that may not want to be saved.

The droid’s sharp rap on the door lead to muffled swearing in two different languages. Which told her two things: they’d found Deven, and he wasn’t gambling for money.
Her second-in-command had many appetites.
She stepped around the droid and added her own pounding to the door. “Deven, it’s me. Get your ass out here.” She paused, and added, “Clothed. Get your clothed ass out here.” Better to be safe. He preferred stark naked.
An increase in the swearing signaled his acknowledgment of her command. The door swung open and a curvaceous blonde stumbled out of the room, a dazed glow on her face. Obviously, Deven had been the one making the extra cash in this scenario.
Her second-in-command was next through the doorway, looking as fresh as if he’d had time for an hour-long sonic shower before he dressed. Tall and exotic looking, Deven seemed to glow himself as he came out of the room. His standard issue flight suit looking like he’d had it been personally tailored to fit his body like a glove. He’d always been good looking, but he seemed different now. She shivered. Maybe absence did make the heart grow fonder. However, it certainly wasn’t going to make her break her rule about getting involved with a member of her crew. Or a telepath.
Deven’s sharp green eyes glinted with mild amusement at whatever he thought was going on in her head. Then he smiled and pulled his dark hair into a ponytail at his nape.
She hated him for always looking perfect. No matter the situation, Deven stayed calm, clean, and relaxed. Somehow she was sure he did it to piss her off. Maybe that anger could chase off whatever other unhealthy feelings were going on in her head.
“We’ve got a problem, a job, and a missing crew.” She didn’t wait for him to respond before she marched toward the casino floor.
She didn’t hear his steps, but the powerful presence at her side told her he’d caught up.
“You were supposed to be here two weeks ago.”
“Yes.” A two-foot-tall Jerlian in a permanently wrinkled suit, sloshed synth-cohol on her boots as he tried to hug her knees. Had Skrankle not already managed to ruin said boots, she would have seen how far she could kick a Jerlian on a low-grav planet. Instead, she took two steps around him and moved toward the exit.
“You didn’t call.”
“No, I didn’t. My being late has nothing to do with you or our next job. Can we move it, please?” She didn’t want to discuss her recent travels, and certainly not in the middle of a casino. Nothing had happened. She was just late. There just wasn’t a reason to talk about it. She squashed the tiny voice that said she needed to talk about it.
“Vas saying please? Now I know something is wrong.” Deven pulled up short before the casino exit.
It would take a week to get off this rock if her entire crew decided to be this chatty about her private issues. “I don’t ask what you’re doing,” she said and held up a hand. “I don’t want to know. I’m not going to tell you what I was doing. We have a job and we have a ship. Do you want to earn some money on your feet for once or not?”
“Ouch, got me.” The smile he flashed caused two nearby women to swoon as Vas and Deven left the casino.
“Turn it down, damn it,” she hissed with a glance down at his bracelets. There were times he pulled a glamour that had to be esper powered, bracelets or no. He didn’t need it; he was freakishly good looking enough on his own. “I can’t have you jailed at this point.”

Marie is a fantasy and science fiction reader with a serious writing addiction. If she wasn’t writing about all of the people in her head, she’d be lurking about coffee shops annoying innocent passer-by with her stories. So really, writing is a way of saving the masses. She lives in Southern California and is currently owned by two insane cats.

When not saving the general populace from coffee shop shenanigans, Marie likes to visit the UK and keeps hoping someone will give her a nice summer home in the Forest of Dean.
Visit Marie at www.marieandreas.com