TM Slay shares her Legend Mine & answers a few questions.

Today, I have TM Slay over to share a bit about Legend Mine with us. But first I wish to ask her some weird Liza questions:
1) When an author writes, they tend to put a bit of themselves in their characters. Which character is most like you?

Terrah and I are a lot alike in her feeling of responsibility, but I've been trained more like Zara. I think there's some of me sprinkled throughout all of my female characters; even in my stand alone books. Of course I look around me, and talk to men and women of all walks of life, and so many of us are the same, so my goal is to introduce you to characters who are relatable to everyone.

2) Do you ever talk or scold your characters?

I talk to my characters all the time! My mother is the one who scolds them, though. My books are more like people telling their stories to me while I record it, than me telling a story including characters I've created. (I know, they're coming to take me away shortly.)

3) Did you embue your characters with any special talents?

Most of my characters have special talents. Even if it's just really intense training in their area of expertise. Everyone has something to offer to the books, even the most ambiguous of characters lend something important. 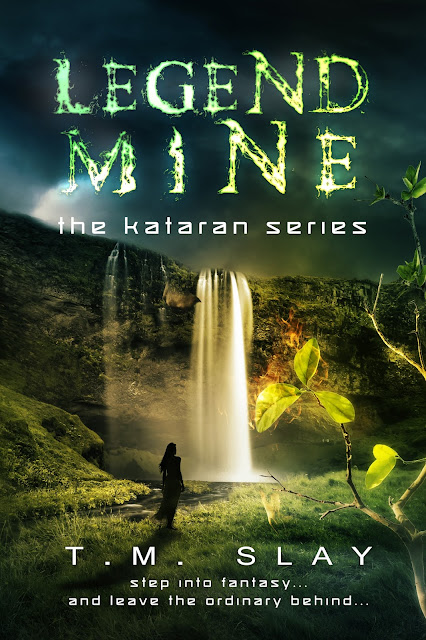 As Reignor royalty, Terrah has always known her duty – until the day her Kataran father was murdered. A price on her head, her trust shattered, Terrah is devastated when it seems neither her mother’s gods, nor her father’s, are able to point her toward the truth. In order to keep her safe and find the culprit, her brother, the new King, has called in the best protection in Rignor Galaxy...

Jacob, the Legendary Ancient Warrior of Warriors of the Katara, is going on what he believes to be his last mission – finding who murdered his mentor. Secrets are plentiful on the mysterious planet of Reignor, and Terrah's help is strained at best. The female is walking, talking trouble. Too bad he needs her...

He commands Legendary skills, she the Legendary Fire, and together they have the Legendary Creature of Reignor to help them find the truth. But will the truth alone be enough to bring a murderer to justice, keep Terrah safe, and prevent Reignor from invasion? Jacob isn’t sure, but he's damn well determined to find out...

His thigh was soaked, and he could not have been happier about it. As he moved it back she made another set of noises which told him she did not like being bereft. So, he easily replaced his thigh with his mouth. Her taste was already on her, between her thighs, in the creases where her legs parted. A few short licks had her nervous, and she tried to close her knees, but she wanted him to love her, she had challenged him to take what he wanted.

He nudged her knees out of the way easily enough with his shoulders, and the span of them left her open wide. Bright red curls beckoned to him, and he could do nothing but answer the call. There was a need in him which would not be sated until he'd had all of her.

In an instant, his decision made, he flicked her clit with the tip of his tongue, and when she began to pant, he knew he'd done well. Then, he plunged his tongue into her hot center to taste her better. He could never have imagined his partner in life would be so amazingly sensitive, as his one plunge started a wave, and her liquid poured out, her muscles clenching in need. He lapped at her as though it was his last meal, and it would be fine with him if it was. She tasted of a special concoction of sweet and salty, a life-giving serum which existed only in flowers on this planet. It could save a person's life if left in the jungles too long, as it was saving his now.

He could not get enough of the delicious flavor of her body, and when the flow stopped of its own ability, Jacob placed his mouth over her and sucked, sucked at her like she was his only source of life. Jacob wanted, no needed her to let go, to give in to him and her own pleasure. He projected through their shared mind how amazing her bottom felt in his hands as he lifted her toward his mouth, how delectable her taste was, and how soft and supple her body, her lips, her inner core was to him.

This time his hands followed his mouth, mapping out every single inch of her body, every nuance. When their mouths collided, so did their minds, her body was reaching, needing some nameless thing, she just needed, and Jacob knew exactly what she needed.

The head of his cock pressed against her entrance, she stilled suddenly.

Everything is going to be fine. Lock your mind to mine, feel my pleasure with yours.

Terrah immediately did as he asked, and instantly her legs widened, looking for the answer he was waiting to give her. One slow bit at a time, he moved inside her, until his head was fully immerged into her wet heat. Her sheath was hot, tight. Her muscles begging him to move deeper, so he moved...slowly

Terrah moaned again, and he continued until he was halfway sheathed, and found the thin barrier which kept him from all he wanted, all he needed.

Send your heat here, my love. Jacob told her while flexing his cock inside her.

Her entire body shivered at his flexing, and he knew their joining would be more than Legendary. In barely a second, he felt a flash of heat bathe him, and with one hard shove, he buried himself to the hilt inside of her.

Raised all over the United States, I decided to settle back in my home state of Louisiana.  A large immediate family of 7 (5 children) and an extended family of well over 20, I never have﻿ far to look for inspiration.  With a love of reading instilled in my very DNA by both my grandmother and my mother, we have a combined library ﻿of well over 5,000 books.  Of course, that love of reading had to give way to a love of writing.

Once my characters jump into my head, they won't jump out until they make their way to the page.  It's a glorious and annoying problem to have all at once.  I hope you'll get to know them as well as I do in myKataran Series, my Atlantean Series, and a few ﻿stand alone ﻿books, all to be published in short order!

Email ThisBlogThis!Share to TwitterShare to FacebookShare to Pinterest
Labels: Legend Mine, T.M. Slay, The kataran series