The “eyes” have it: Using eyes to convey (or not convey) emotion

It’s been said that the eyes are the windows to soul. Human eyes are very expressive and convey a lot of emotion. They show when we’re happy, sad, tired, amused, angry. They spark, glare, glitter, droop, gleam. We talk about fake smiles that don’t reach the eyes.

Because of the expressiveness, authors use eyes a lot to convey emotion.

So, I challenged myself when I made the heroine of Claimed by the Cyborg a Xenian. I had created the alien Xenians as secondary characters in an earlier book in the series. One of their distinguishing characteristics was their eyes. Unlike human eyes, which can be brown, blue, green, hazel or even violet or amber, Xenian eyes are solid black. It’s as if their eyes are all pupil. I realized solid black eyes would be “unreadable.”

The hero, March Fellows is a human-turned-cyborg who finds Xenian eyes (at least the heroine’s) mysterious.

March gaped at the woman who’d entered the hall, her arm linked with a girl’s. Hair, long and curly, tumbled down her back. Her eyes were as he remembered, as black and enigmatic as space, but girlish features had matured into womanliness. Jules. My Jules. Her gaze collided with his, the darkness concealing her thoughts, but her mouth parted as if shocked. If he hadn’t been seated, the sight of her would have knocked him on his ass. His hands shook, and he clenched them into fists to quell the trembling.

Julietta, the Xenian heroine, is enthralled by Terran eyes.

At the start of her first year at the university, she’d met him, a teaching assistant in one of her classes. Marchand Fellows had a quick mind, a ready quip, and a wicked grin. But, oh, his eyes! Such a striking color. Blue like the Terran sky, so very different from black irises concealing whatever lukewarm emotions her people did feel. March’s eyes had glinted with humor, pensiveness, concern. They had fascinated her.

When he’d catch her watching him, he’d wink. She’d feared he’d suffered a facial tic until another student explained he was flirting—and then explained what that meant.

Once I realized that solid black eyes would probably not reveal emotion, I used trait in the story and made the moderation part of the Xenian nature. They feel emotion, but their culture does not allow them to express it with exuberance. Because of this, love does not factor into their relationships; their marriages or “bondings” are arranged.

“Did you grow to love him?”

“Father. Did you ever grow to love him?”

“Love? It is well and good for troubadours to fill commoners’ heads with romantic frivolity. The bond your father and I share is sounder than any built on love. Our foundation is not based upon ephemeral whims but mutual respect and commitment. We complement each other.”

“So you don’t think it is possible for love to grow?”

“Well, I suppose it’s possible, but why would that matter when you have an empire to rule?”

Because I have an empire to rule. That is why it matters. “So you don’t love me—or Marji?”

“Of course I do! A mother’s love, a parent’s love for a child is a different matter.”

“Terrans bond for love,” Marji piped up. “I thought you admired the Terrans.”

Julietta looked at her mother, anxious to hear her reply.

“I admire many things about Terra,” she agreed, “but their emphasis on love isn’t one of them. Emotion offers a weak reason to bond, as evidenced by the fact that a significant portion of their marriages fail.”

“Perhaps love is so important they cannot carry on without it,” Julietta said quietly.

Julietta, of course, is an exception. She feels deeply and falls in love with a cyborg with eyes as blue as the Terran sky. 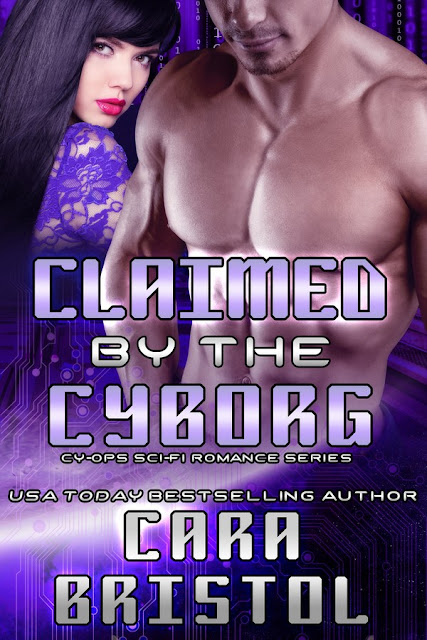 Claimed by the Cyborg Description

March Fellows assumed he had all the time in the galaxy to pursue a relationship with Jules, an alien exchange student from Xenia, until she vanished without a trace. After years of searching, he finds his lost love on the eve of her arranged marriage.

The daughter of the Xenian emperor, Julietta never meant to fall in love with a Terran man while visiting Earth. Leaving to fulfill her responsibilities on her home planet opened up a hole in her heart that could never be filled. When March, now a cyborg, unexpectedly shows up just before she is to be bonded, she struggles to find the courage to turn him away a second time and follow through with her duty. Before she can act, the lovers are thrust into a political conspiracy that threatens the Xenian empire and their lives. 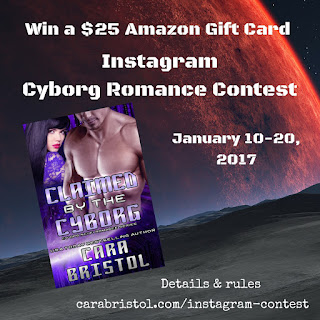 Do a bookstagram using the cover of Claimed by the Cyborg and enter to win a $25 Amazon gift card. Deadline to enter is January 20. Get the rules and details here.