Occupation: On Earth in the early 21st century, I was a cancer researcher in St. Louis, Missouri. Now I’m living on a different planet 3,000 years in the future. Huge change! All my science knowledge is totally obsolete. Thankfully Vanta has access to the Uninet (kind of like the Internet), and I’m updating my education.  I’m also going to be a mom again. I haven’t had a baby in a VERY long time, so I have much to remember and prepare for.

First impression of Joran Zoma:  Terrified! One night I went to bed (my bed) in the 21st century, and I woke up on a transporter pad on a space ship in the distant future. I thought Joran was insane (for so many reasons), but I couldn’t help notice he was the sexiest man I had ever seen. It took me barely a nanosecond to fall in love with him.

Greatest adjustment to life on Vanta: Oh, the list is endless. Being able to travel almost anywhere in seconds is amazing. Also, I’ve met people from many different worlds in the galaxy.  I have a special relationship with Joran’s best friend Max, a green-skinned male from the planet Zelos.

Greatest joy: My new husband Joran and my new family. Joran gave me a second chance for happiness, and I love him beyond words.

Greatest regret: Staying in my first marriage when it was long over. I spent way too much time with a man who didn’t love me. Never again!

Now let's check out the book! 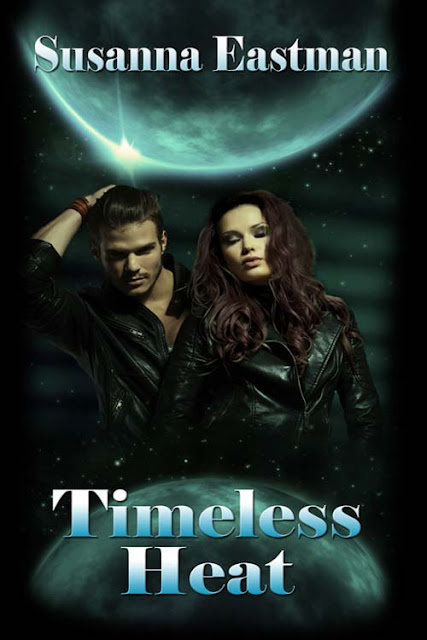 Blurb
Adrift in space after a strange cosmic phenomena sent them into severe sexual heat, intergalactic trader Joran Zoma and his business partner, Max, are dying. Time is running out, and only a woman from the distant past can save them.
Ava Fisher, recently divorced and deeply unhappy, is trying to move away from the hurt and bitterness of her past. Then she's kidnapped by two strangers—aliens from a different time and place. More astounding is their claim that she carries a rare hormone and must mate with them to save their lives

Excerpt
Joran nodded and awkwardly shifted his body away from her. His fingers dug into the soft arms of his chair. “As a biologist, you’re familiar with sexual heat?”

“Of course.” She’d learned about that in high school biology 101. “Some female animals experience…”

Joran shook his head, interrupting. “It hasn’t been that way in a long time. For more than a millennium, humanoid males have gone through sexual heat cycles. Some believe it’s nature’s response to increasing female infertility. The storm critically diminished our testrus causing us to go into severe heat. Normally, early onset or out-of-cycle heat is only painful if unsatisfied, but our levels are so weakened…” He pressed his lips together and sighed. “Without the high estrus levels of an Alpha female, we’ll die. Maxim only has five to six hours to live.”

Her eyes shot open as realization dawned on her. He didn’t want her blood, her cells… The straining bulge between his legs spoke volumes, but Ava pressed on, needing to be very, very clear. “When you say you need a female with high estrus, you mean…”

“Only through sexual…” His hand, so stiff, ran through his thick, short-cropped hair. The muscles all over his body tightened as he forced the words out. “I brought you here to mate with us and save our lives.”

Bio:
Writing has always been a part of my life. I loved to write short stories as a little girl, and I majored in communications in college. While I’ve spent most of my career as a public relations writer, I dreamed of being a romance novelist. I was fortunate to meet my personal romance hero during college. We met at a fraternity party my freshman year at school and became fast friends. One night I was eating dinner at his fraternity, and my future husband suavely sat on an empty table beside me to chat. Unfortunately, that table was missing a leg and it collapsed on my arm. When he called the next day to check on me, I had to tell him my arm was broken. (It was!) Devastated but still gallant, he asked me out on a date. We’ve now been married more than a few decades and have two teenage sons.


Blog: https://susannaeastman.wordpress.com/blog
Posted by Liza O'Connor at 12:00 AM