Reaching toward Abundance
Thanks for welcoming me to your blog, Liza.  As a lifelong Star Trek fan (all series), I’ve always been intrigued by the replicators – a technology that created any material good they needed on demand. In seconds. My fascination doesn’t stem from the science around it, but from the profound impact it can have on social and economic systems as we know them.  If you can replicate anything with a voice command, you can theoretically eliminate hunger, poverty and despair.
Our economic and political systems are based on scarcity. We use markets and politics to allocate our limited resources with certain types of systems mo­­re equalitarian than others.  But if resources were abundant, what then? What might the world look like?
In my new series, Green Rising, I explore that very question. What would a society organized around abundance look like?  Like in many series, in the first book, this new world does not yet exist. Poverty, corruption and want remain. The goal of the rebel coalition is to move from a social/economic system based on scarcity to one based on abundance. They view replicators as the key technology for accomplishing that objective. Exploring this question will take the whole series (I have seven books planned). Today, I’m proud to share Race to Redemption (Green Rising #1), where the story and the exploration of this question begin. 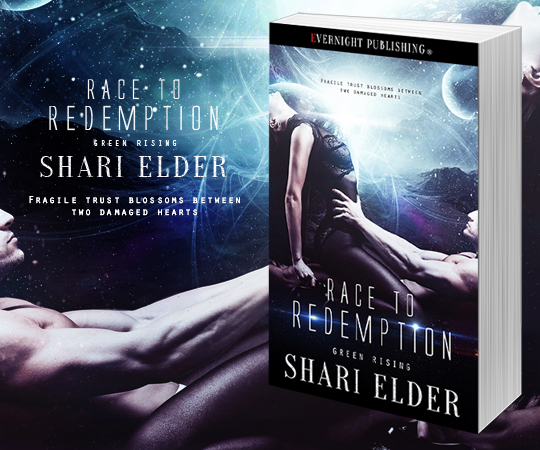 A woman who lost everything.
Intergalactic storm racing champion Elaina Carteret had it all – fame, wealth, men – until a horrific accident took it away. To get it back, she agrees to pose as Lainie Carter, medical transport pilot and corporate spy. Her risk-taking attitude infuriates Dr. Erik Johansen, who runs the outpost with an iron hand, a permanent scowl and the tightest bod on the planet.

A man desperate for redemption.
Unable to forgive himself for a past tragedy, Erik works himself into an early grave. He has no patience for the insubordinate Lainie Carter, who can’t take an order, disrupts routine and flames his body to ash.


Excerpt
Erik tilted his head. Speech didn’t seem to be in him. She followed him to the bathing room at the back of the building. The small lump in the bath couldn’t be Sen. Whatever it was had gill-slits and grayish-green skin, no remaining golden hue of the Ranharran air breathers. No, definitely not Sen.
“I don’t understand.”
“Biogenetic tampering that forced his DNA to rewrite itself into Den Vedran but it was only partial. His gills are not fully formed, but the Ranharran lungs collapsed. I believe the Den Vedran lungs would have grown over them but not in time. The changes left him unable to take in oxygen from any source.”
She couldn’t get her head around what Erik was saying. Every cell in her body froze into numbness. Her blood stopped flowing. That just couldn’t be Sen.
“We should return him to the dust. Sen had a soft spot for Ranharran ceremonies.” How she coughed up those words she’d never know, but it was what Sen would want. If that lump were Sen, which it wasn’t.
Erik shook his head. “He’s not dead. I injected him with a stasis drug. It only lasts about two months. I’ll need to do so some tests on him.” His low growl told her the idea appalled him as much as it did her. She swallowed back an instinctive retort. He didn’t need her crap on top of the pile he already carried.
“For Qirta,” she said instead.
Gratitude flickered in those ancient eyes. She took his hand and leaned her head against his shoulder, desperate for touch. He let her without balking. A heart did beat underneath Erik’s scowl.
They stood together without moving for what seemed like a century. Fintarl brought in an air gurney at some point to move the body that wasn’t Sen to the lab. Everyone in the camp stumbled like the walking dead to get through the next hours. Ranharrans did not have tear ducts because their bodies were built to retain every ounce of water. They hummed in grief and the camp was awash in a low, melancholy drone.

Hello, I'm Shari. By day, I crawl out of bed, mainline coffee, walk the dog, get my kid off to school, hop on the metro, and save cities within the four walls of my office. Usually by email.

At night, the other Shari emerges.  I take off the suit, curl up on the couch and let my imagination play, with words and images until stories take shape (while periodically checking on my teen-ager, hiding out in the bedroom and plotting world domination).  As my alter ego, I save cities in a cape and spangled tights, wander space and time on a surfboard, fly over the Himalayas on feathered wings, make six-toed footprints in indigo talc snow on the sixth planet in the Andromeda galaxy or eavesdrop on Olympian gods while pretending to whip up a bowl of ambrosia.

In all these wondrous worlds, romance and passion blossom. I can't resist a happy ending. And I am particularly prone to writing happy endings for those who have given up on ever getting one. That gives me immense satisfaction.

Join me on my journey. The best ideas emerge from team work.