The three novels in the Grand Master’s Trilogy star a wealth of fantastic characters and the adventure skips across the galaxy. Teleportals are used for interplanetary travel. The story follows young empath, Violet Hunter, as she travels on missions for her Grand Master, and later unites with him on a quest to save galactic civilization. Their allies include: Ythris, the Black Dragon, and his mate, Silver Istrelle, Grand Master Amarylla Threeleaf, the flower-like Wistralian, and her pawn, Lira Tong, a catwoman from Aman-el.

The trilogy has short visits or extended adventures on a dozen different planets and a couple of moons. The story begins on the campus of the Terran Space Academy near the ominous black marble Council Hall of the Grand Masters. It ends with a celebration on the Griffin’s Eyrie.

Several planets are terrestrial or were terraformed many generations ago and are inhabited by the descendants of earlier human colonists. Planets in this category are Avalon, home of the White Mother Tingu and the Master Smith Stimon, and Cinerea, home of the Gray Folk and Kondric, leader of the Tronel army. The planet of Cirrus Beta, where Violet’s mother Silvia lives, and the Griffin’s Eyrie, also have Terran-like climates and vegetation.

Other exoplanets have distinct environments and native inhabitants. Erebus has an icy surface crust over a rock core, honeycombed with tunnels and caves. The ethereal Elyrians live in an underground cavern lit with crystals. Sythos has a hot climate and the dominant lifeforms are reptilian, including the proud dragonlords. They restrict visitors by locating the single guarded portal on the moon, Illoris. AguaSalva is an ocean planet with various marine inhabitants, although humanoids live on the islands. Destiny has giant carnivorous arthropods, purple and yellow plants. Despair is mud-colored with vast deserts and few lifeforms.

Each planet holds hazards. Some are deadly even for a Grand Master.
Are you ready to explore the Grand Masters’ Galaxy?

Excerpt from Grand Master’s Game
On Destiny, the planet where Violet first met her Grand Master in person.

Violet watched until he disappeared behind the glossy hemispheres. She checked the sky and saw nothing except for the indigo clouds. Crouching on her heels, she touched the sand and lifted a handful of warm grains. The fine slate-blue particles shifted gently through her fingers. Her heartbeats drummed into the eerie silence. What was wrong with this place?

She stood up and took a step. The sands trembled under her feet and she dropped into an opening in the ground. Loose sand cascaded over her head. Her feet touched a bouncy surface and her descent halted. In the darkness, a watchful mind clawed into her consciousness.

Her combat training kicked in. Calmly alert, Violet switched on her laser for illumination. She stood on a yielding surface inside a cavity not much larger than her body. A circle of gray worms wriggled at the periphery of the space. She shuddered and winged a shout for help. Nothing! Where was Athanor when she needed him?

The gray worms writhed and the cavity contracted around her. Violet bit back a scream. The surface wobbled under her feet. Insight slammed into her mind. She was trapped in the giant maw of a monster. The worms were tentacles around its mouth.

A hole gaped beneath her. She staggered, slipping inexorably down its throat. Desperate to stop her descent, she dropped the laser and grabbed the snaky tendrils. The light of the laser spiraled down the open gullet and vanished. Grimly determined, Violet hung to the slippery tentacles. Her star mark stung and lilac light shot from her embedded amethyst. Focusing, she speared psi energy into the hungry mind. The monstrous body thrashed in agony, spitting Violet out of its mouth.

Yelling wildly, Violet burst from the sands and shot high into the air. Strong arms caught her. “Where were you?” she demanded angrily.

“Distracted, my brave little pawn. There are scrawls like writing on the opposite side of the domes.”

She leaned against his firm chest, breathing in the spicy psi emissions. “I was trapped in the mouth of an enormous worm.”

“I see the damage you caused.” His amused tone warmed her. Looking down, she saw sinuous streaks in the desert floor left by the agonized writhing of the monster. Its body had vanished under the sands.

Athanor remarked casually, “Your shiny coating of slime does not appeal to me. The odor is repugnant.”

Her irritation soothed by his embrace, Violet’s response was mild, “Could be worse. I could have slipped down its gullet. Dunk me in the river!”

“I’ll do better.” Blue psi misted over her body and the slime vanished.

She voiced her approval of his technique, “Flashy cleanser!”

Read about this series HERE

Teleport through the galaxy in this thrilling SciFi/Fantasy adventure and romance
You have several possible starting points to the series: A, B or C. 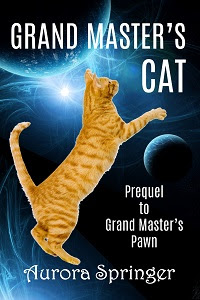 A. Short Prequel: Grand Master’s Cat
Amazon
When Grand Master Griffin investigates a wrecked spacecraft, his efforts to rescue the survivors lead to feline disruptions of his plans. 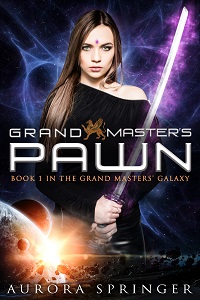 B. Grand Master’s Pawn, Book 1
Amazon  iBooks  Kobo  B&N
Young empath, Violet Hunter, dreams of exploring exotic planets as a Grand Master’s pawn. When life-threatening cracks appear in the teleportal web, she is tasked with investigating the disruption. Suspicions point to the twelve Grand Masters, and she must penetrate their curtain of secrecy to identify the culprit. Her challenges escalate when she meets the enigmatic man behind the griffin avatar. She plunges into a world of deadly intrigues and risks a perilous love. Armed with only her erratic powers and a mishmash of allies, she must battle the most powerful beings in the galaxy. 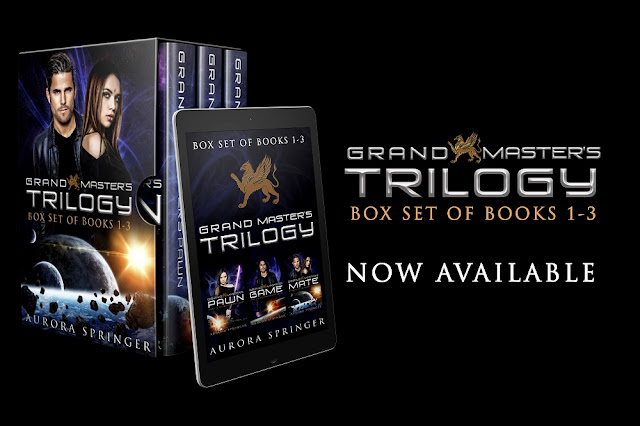