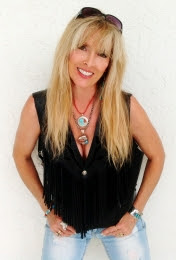 She's a bestselling romance author, and former successful model who enjoyed an adventurous jet-set lifestyle that she now uses to set the world on fire with her sizzling romance books.

She a tenacious Irish lass, who strives to entertain with seductive stories created from her decadent imagination and traces of a provocative lifestyle she may or may not admit to.

She intrigues her readers with a mix of the past, present, and future, and sexy blends of futuristic science fiction, paranormal fantasy, and western romance, always with love everlasting.

Her interest in the paranormal, fascination with quantum science, passion with myths, and the lure of her mysterious Celtic Irish-Druid bloodlines are combined with generally unknown truths, strange facts, and questionable fiction filled with passion and mystery.

She hopes her sultry stories will entertain and fascinate those who dare to take the journey. But don't be fooled by the glit and glamour Houston has a secret: she was an Acquisition Editor at one time. You can find her at http://houstonhavens.com 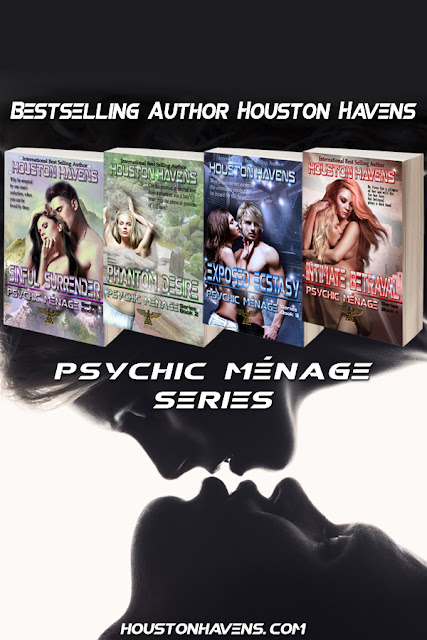 Blurbs for Psychic Menage Series
and the first 4 books of the series
Series blurb:
Though the humans were warned time and time again, they refused to believe doomsday was at hand until it was too late to find sanctuary. The price they paid - was their lives. This series takes place in the aftermath of the Transdamian Prophecies of the worlds end from devastating earth changes caused by the passing of the planet Nibiru. The series opens in the future of Earth, in 4860 AD. There were survivors. Not all were human, and not all of them were happy.

What the Dirt Dwellers and Airbornes didn't know was, since the beginning of humanity there had always been and unseen presence guiding their beliefs, actions, and lives. The Secret Blood Doctrine is the law the Dirt Dwellers Elites live by. The Elites of the Dirt Dwellers have their own goals and reasons for controlling the Earth. The humans were a means for accomplishing their goals, and a way to cover operating costs by culling them at the end of each cycle, every 3600 years. At the arranged times, the Elite Dirt Dwellers and their chosen few would withdraw to the Underworld to await the next renewal. http://amzn.to/2ikruOQ

Book One: Sinful Surrender
Why be tempted by one man's seduction
when you can be loved by three?
Top psychic spy Fay Avalon saw too much on her latest mind traveling mission and is now on the run from her post-catastrophic dystopian government, searching for the truth and proof. She escapes but is shot down, landing in the arms of the enemy.

In Drakker and Arlo’s world, women are so rare the men have accepted a polyandrous lifestyle. When the brothers stumble upon Fay unconscious in the wreckage of an aircraft, they are immediately attracted to her. Arlo wants to keep her, but Drakker knows they can’t. They must take her to their brother Logan Abán, leader of their people.

Logan struggles with trusting anyone, even himself. When a beautiful, intelligent, and intriguing woman falls into their laps, his denied desires for intimacy challenge his need to trust the spy. He’s frustrated by romantic Arlo’s claims of her innocence. Even when pragmatic and dominating Drakker defends her as well, Logan refuses to trust his gut.

Can one woman satisfy the diverse desires of three men? Will Logan’s fears be realized by betrayal? Is Fay to be sentenced to death as a spy, suffer a fate worse than death by being returned to her government as a traitor, or will she find a new life and love as the wife of three sexy brothers? http://amzn.to/2iQSitt

Book Two: Phantom Desire
Can the promise of eternal love from a phantom win
over the physical passions of real men?

Mind traveler Chandra Lamar is on the run, not only from her post-catastrophic dystopian government but from a past she can’t remember. A psychic vision pushes her to recall her purpose for being, but it’s a ghost that awakens her desires for a life she fears she’ll never have. Both push her to remember the past because it threatens what she wants in the now; the Nodin men.

Andonis Nodin battles to accept his failures. The heavy burden nearly breaks him when he can’t save a loved one from the grim reaper’s grip and questions his desire for Chandra, the woman he blames for the death around him.

Nikias finds true love with Chandra in his arms, but is desperate to stop her from seeking revenge on a mission he knows is a one way trip. Ortello knows for them to recapture the love they once felt for each other, he must be willing to let her go. But overcoming his obsession to make Chandra his and his alone isn’t easy.

Will Chandra go through with the vengeance in her heart or give it up for love? Who is the powerful woman in her haunting visions and will those revealing apparitions crumble her world with the Nodin clan? Does Chandra find true love in the arms of the Nodin men or does her Phantom Desire forever own her heart? http://amzn.to/2iQDaw6


needed to be heard by the heart

Daughter of the Dirt Dweller’s ruler; Tessla Reto attempts to escape the Underworld after the mysterious disappearance of her best friend. She knows her untimely death is also near if her father, Landen Reto discovers her part in forming the rebels to fight against him. The two men sent to help her get away are killed and she’s rescued by a handsome stranger…or is she?

Faerydae returns to Earth in search of an inner peace his soul can’t find after the death of his friend Chandra Lamar. Instead, he finds himself in an unplanned rescue of a woman that stirs everything he’s fought a lifetime to deny. Can Faerydae stay focused on his goal to expose his past and true Fae bloodline, or will destiny play her hand?

Shomar’s uncomplicated world is tossed asunder when his best friend, Faerydae, shows up with a stray puppy and a woman who steals the heart of his soul the moment he looks at her. Only to discover Faerydae and the woman claim they can’t stand each other, yet his intuition tells him otherwise. Will Shomar be able to win the woman of his dreams or will Faerydae always have her heart?

Will Tessla find her freedom? Will Faerydae keep his, or will Shomar succeed in his plan to expose them to their hidden ecstasy? http://amzn.to/2hZeahU

Book four: Intimate Betrayal
He lives for a glimpse of her and will die for her love
but
betrayal plays a dark hand
Kindise Wyatt escapes her Star Rider captor and returns to Earth. With the help of a sexy Old World Mole and his mysterious friend, she's determined to uncover the whereabouts of her lover. Instead, she finds nothing but betrayal and her captor in pursuit.

On the lam after betraying his evil ruler, ex-Dirt Dweller and drifter Jaden Valenti confirms his name is on a hit list. Finding what he believes will be safety amongst the Airbornes, he recreates himself and hides his past until trouble walks back into his life in the name of Kindise Wyatt, the woman he was ordered to assassinate and didn't.

Due to the obsessions of a Fae woman Sori gave up his hard-earned royal title and left his homeland of Elfame. Love is the furthest thing from his mind until he is sent in Jaden's place to pick-up some cargo...human cargo in the form Kindise Wyatt. He feels the Fae magnetism of his soulmate in her. Problem is; she's in love with someone else.

Will Jaden fulfill his orders to kill Kindise and get his name removed from the list, or will his secret be exposed and betray the friendship he has with Sori? Does Sori help Kindise find her lover, or will a love between them have a chance to flourish before a fatal attraction and a determined captor rip their love asunder? Will Kindise find true love or will betrayals at every turn crush the fight out of her? Can she find her inner strengths to keep fighting and lead The Freedom Fighters to defeat the Dirt Dweller elites, once and for all? http://amzn.to/2hZeahU