Today, I have Chris Myers over, sharing her fabulous series

Take it away Chris!

Aledan Series
I started The Aledan Series quite a few years ago before scifi romance fully emerged as a sub-genre. A longtime science fiction fan, I always wanted more romance in the stories, so I started writing my own.
The Aledan series is part paranormal romance, part space opera and part family saga that follows the lives of Hankura and Chelle from their first telepathic encounter as children. Not until Hankura is grown up does he begin to accept that she is his psi-mate and that he will never feel whole until he goes back to Earth to find her.

The Aledan: A Psionic Love Story : Born on a world called Aledus where Psions are shunned and treated as second class citizens both socially and legally, Hankura is reluctant to take Chelle there. He feels he has no choice because he promised his parents he would return. Chelle is his psi-mate whose mind has been linked to his for twenty years since they were children.

As I wrote the story I tried to show how their mind link can both enhance their relationship and make life more difficult. I also wanted to show how racial prejudice can divide people and cause unfair treatment because of their special abilities. How Hankura and Chelle deal with the prejudice against them in Aledan society and within Hankura’s family is the heart of the story.

Hankura and Chelle’s story continues through the Aledan Series as they meet new challenges and hardships.  The sequels follow couple through a five year stint with the Explorations for a five year stint. To keep things interesting a new romance unfolds in each along with Hankura's and Chelle's evolving relationship.

Surviving Zevus Mar begins at the end of their service with the Explorations. It is the darkest of the series as their ship is captured by Tregans. The takeover is violent and bloody. Hankura must surrender or watch them kill Chelle and their ordeal is only beginning. The women become sex slaves and the men are just slaves. The story doesn't elaborate on the rapes and violence but on how they survive and pick up the pieces of their lives and reconcile with what they had to do to survive. Is love enough for them to find the courage to go on with their lives?

The Tregans aren't finished with Hankura and Chelle in Psi Factor. They suspect the pair holds the key to developing super soldiers with psionic abilities in addition to their impenetrable psionic mind shields. This puts the couple and their two children in danger when they are en route to Velran for their children to learn to discipline their powerfl psionic abilities.

I hope to release The Aledan's Children for Kindle and in paperback in June 2017. 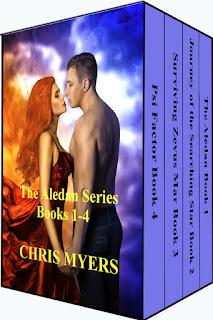 The Aledan Series Box Set  Second Edition is available for Kindle and runs 787 pages.  The books are also available individually for Kindle and in paperback at Amazon and free to read on Kindle Unlimited.

Chris Myers
Posted by Liza O'Connor at 12:00 AM