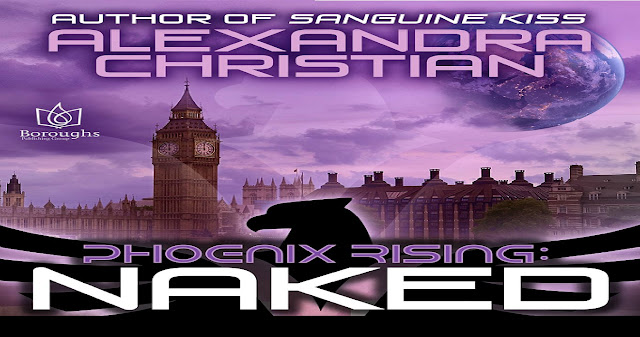 Today, I have over Alexandra Christian sharing her SCI-FI Romance: Phoenix Rising Naked. 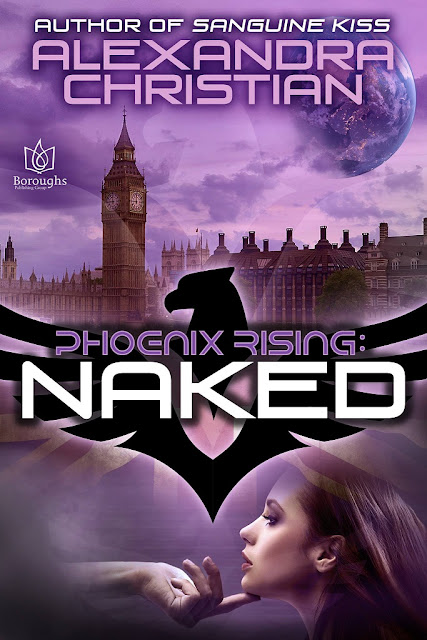 BLURB:
Librarian at one of Earth's last paper libraries, Phoebe Addison is about to have a romantic and interplanetary adventure wilder than anything she's ever read.
OUT OF THE STACKS

Librarian Phoebe Addison has lived her entire life within a seventy-five mile radius of her small Louisiana town, but when she receives a strange medallion from her adventurous, off-world sister, reality tilts toward the bizarre. Everything Phoe thought she knew is…well, wrong. Dead wrong. But bone-numbing fear has no place in this brave new world—nor by the side of the dangerous, exquisite man who saves her life.


…AND INTO THE FIRE

Following the tragic slaughter of his family, operative Macijah “Cage” St. John understands evil in a way no man ever should. He traded happiness for a magnificent and terrible power, and fate isn’t done with him yet. He wasn’t looking for comfort. He didn’t need tenderness. But today he’ll play hero to a damsel in distress, and his quest will deliver him to the uncanny Martian colony of New London—and his heart to the demure Phoebe Addison. The bookish beauty’s hidden talents and deep abiding love just might save Cage from himself.

AUTHOR BIO (No more than 250 words):
Alexandra Christian is an author of mostly romance with a speculative slant. Her love of Stephen King and sweet tea has flavored her fiction with a Southern Gothic sensibility that reeks of Spanish moss and deep fried eccentricity. As one-half of the writing team at Little Red Hen Romance, she’s committed to bringing exciting stories and sapiosexual love monkeys to intelligent readers everywhere. Lexx also likes to keep her fingers in lots of different pies having written everything from sci-fi and horror to Sherlock Holmes adventures. Her alter-ego, A.C. Thompson, is also the editor of the highly successful Improbable Adventures of Sherlock Holmes series of anthologies.
A self-proclaimed “Southern Belle from Hell,” Lexx is a native South Carolinian who lives with an epileptic wiener dog and her husband, author Tally Johnson. Her long-term aspirations are to one day be a best-selling authoress and part-time pinup girl. She’s a member of Romance Writers of America and Broad Universe—an organization that supports female authors of speculative fiction.